I’d like to share one of the most delightful experiences I’ve ever had at the movies. It took place last April, at the U.S.A. Film Festival in Dallas, during a day devoted to new short films. They screened a 39-minute movie named “Junior High School,” and the audience, myself included, was completely won over: How could we have anticipated such a completely winning, sunny and wickedly funny experience from a previously unsung film?

“Junior High School” has played a dozen festivals since then. I included it on my “buried treasures” program last September at the Toronto Festival of Festivals, where it was a great success. savagery. It’s an original musical about innocent teenage romance. It was shot on location at a real Southern California junior high school; it stars real junior high school kids playing versions of themselves, and of course, it’s populated with all the stock characters like a wacko shop teacher, the prim librarian, the gung-ho women’s gym instructor, the know-it-all class brain and the hero’s best friend.

The story behind the movie is sort of a cinematic rags to riches. Three film students, David Wechter, Michael Wankin and Steve Jacobsen, made a TV commercial for theLos Angeles Timesas a personal project. It turned out that theTimesliked it enough to buy it and run it, and with the money from that sale, they began the financing for “Junior High School.” (This movie, in turn, impressed the Walt Disney studios enough that Wechter and Nankin were invited to direct a feature, “The All-Night Treasure Hunt”).

The movie has the flash and sparkle of a “real” musical – production numbers, comic songs alternating with serious numbers – and it has a plot with which we immediately identify. This Friday’s the night of a big dance, and the hero’s in love with a girl he’s afraid to invite. Will he? Or will he be waylaid by the class sexpot? Will the wiseacre know-it- all sabotage everyone’s plans?

The movie remembers the funny and the painful aspects of teenage sex life, in such poignant numbers as one sung in girls’ gym: “The Itty Bitty Titty Committee.” It pulls out all the stops in a big production number involving P. E. classes. It puts together one virtuoso number involving orchestra rehearsal, shop class, home economics and study hall. And its climax is cleverly built around such realities as corridor passes, messenger duty, the passing of notes and poetic justice. In summary: I think it’s probably impossible not to be charmed out of your socks by “Junior High School.”

2007 Note: One of the stars is the then-unknown Paula Abdul. 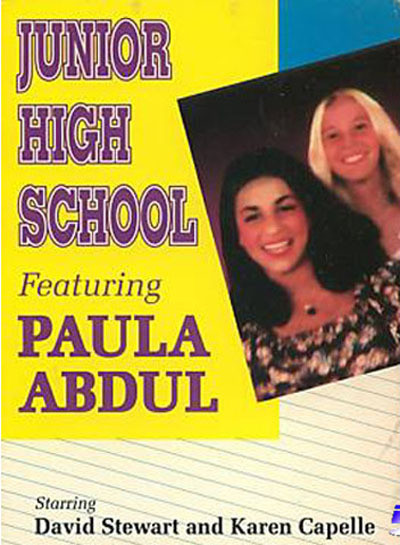