There’s something so compassionate and warm about Jacob Hamilton’s “Jump Shot,” a film that is on one level about the history of basketball but is really more about legacy and impact. It’s a loving ode not just to a beautiful sport that we’re all missing dearly in 2020, but also to a role model, someone who is presented with such love in this film that it becomes surprisingly emotional. A lot of filmmakers would have approached this subject clinically, making the case for why anyone who loves the NBA needs to know about Kenny Sailors through breaking down technique and highlighting game footage. There’s some of that in “Jump Shot” but Hamilton and his team deeply respect the fact that Sailors saw himself as more than a basketball player. He was a husband, a Marine who served in World War II, a grandfather, a coach, and a teacher. Kenny Sailors may have invented the jump shot, but the film about him pays him a great honor by being about so much more.

Some of you are probably saying, “Wait, someone invented the jump shot? Isn’t that like inventing throwing a football or swinging a bat?” The truth is that the jump shot is such an intrinsic part of modern basketball that even fans may not know that someone had to do it first. For years, basketball was played flat-footed. A player had to get insane separation from a defender, who was also on his feet, and then push the ball two-handed to the basket. It made for a slower and fundamentally different game. And then a kid in Wyoming named Kenny Sailors jumped (although Sailors himself is reticent to take credit for what he pioneered, noting that someone else probably jumped before him).

The more important point is that Sailors didn’t just jump like you or I would on a basketball court. He refined a jump shot in which he stopped on a dime (so as not to commit an offensive foul) and went straight up. There’s a picture of Sailors above everyone else from Life Magazine that’s just gorgeous, indicating how it wasn’t just a jump but a game-changer. Sailors in the early ‘40s looks like Steph Curry or Kevin Durant look today, and both of those gentlemen turn up in this doc to pay homage along with other basketball greats like Dirk Nowitzki and Bobby Knight. Honestly, I was more drawn to the people who actually knew Sailors than the man himself. Hamilton paints a portrait of a life well lived, someone who through being gracious and kind impacted everyone he met.

“Jump Shot” is also a story of life’s unexpected turns. After winning the championship with Wyoming in 1943, Sailors was sent to fight in World War II, and he was made Captain by the end two years later. He returned home and played in the NBA, but that was a very different organization in the ‘40s than it is today. Despite being a leading scorer, Sailors made almost no money and was shuffled from team to team as organizations literally folded with regularity. After playing for a few years, Sailors learned that his wife’s health condition meant living away from the city would be best and so they relocated to Alaska in the relative middle of nowhere. Even there, Sailors was a pioneer, pushing for women’s athletics at the school where it seems he coached everything.

While seeing Durant and Curry again is cool for this NBA fan, especially speaking about someone for whom they have so much admiration, I was more taken by the personal stories of those who knew and loved Sailors. “Jump Shot” is a story of how much difference we can make in the world just by being genuinely good and true. With everything happening in 2020, it’s a moving reminder of the importance of commitment and decency. 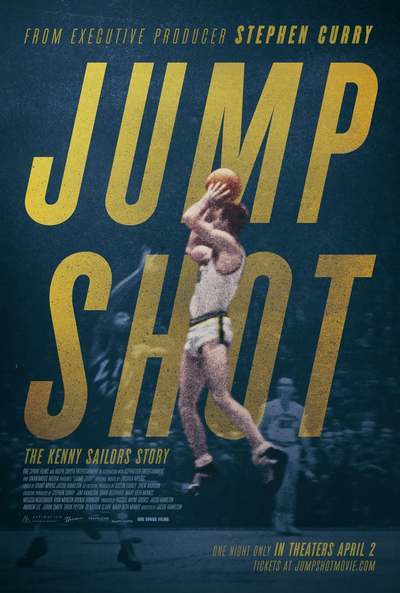 Kenny Sailors as Himself

Kevin Durant as Himself

Dirk Nowitzki as Himself

Stephen Curry as Himself

Jay Bilas as Himself

Bobby Knight as Himself

Nancy Lieberman as Herself