Even in a rambling romantic dramedy like Jesse Peretz’s “Juliet, Naked,” Rose Byrne is a gem to watch. Anchored in a sleepy coastal town in Britain with a free-loving sister, a dead-end job and a deadbeat boyfriend, Byrne’s character Annie somehow remains undefeated. She hopes against the odds that something in her life will change her monotony. Perhaps having those kids she’s been thinking about a lot lately. Eventually, Annie realizes that if she wants things to change, she’s going to have to do it for herself.

Were it not for Byrne’s endearingly optimistic performance, most of the charm of “Juliet, Naked” would be swept away. Her relationship with her longtime boyfriend, Duncan (Chris O’Dowd), is one of dreary complacency. My nerves wore down quickly watching him scold her for not loving what he loves (a musician named Tucker Crowe), ignoring what she says or pursuing a co-worker because she likes his music better than Annie. The arrogance in his careless actions hurt to watch, and it pained me to watch his petulant entitlement lord over Annie. Were Annie our friend, we might have staged an intervention to get her away from such a boor.

As the movie forcefully positions the audience to root against Duncan, a surprise figure appears: Tucker Crowe (Ethan Hawke), the mysterious singer-songwriter Duncan obsesses over. However, the artist doesn’t connect with his superfan. Instead, he reaches out to his online critic, Annie, who panned one of his acoustic bootlegs titled “Juliet, Naked.” Their email correspondence grows deep and revealing, and soon, he arranges to meet her. But he’s another personal mess of a different kind—a man with several kids from different women and wives and who lives in a barn behind an ex’s house. In voiceover, Annie contemplates single motherhood, and she’s got a point between the two men in her life.

There are some moments of suspense when watching Annie figure out if she will or won’t take a chance on a down-and-out American musician or go back to her droll partner who may finally have listened to her on the whole having kids issue. Peretz’s movie, which is based on Nick Hornby’s novel of the same title, is not without its sincere moments. One memorable scene takes place over a heated dinnertime debate between Duncan, professing his love of Tucker’s work, and Tucker, who’s dismissive of almost any praise. It becomes an argument of what artists mean to fans, and how art belongs to fans instead of the artists. The discussion is cut short because of Duncan’s temper, and the moment felt cheated out of what it was trying to explore for a dramatic shortcut.

Some aspects of the story feel overly familiar, especially when it comes to Duncan’s macho one-upmanship against Tucker. It’s predictably tiring. The messy aspects of Duncan and Tucker’s lives threaten to suffocate Annie’s life, and by extension, the audience. In more than one scene, Duncan talks over her without a hint of irony, and while it’s played as a joke, it feels more accurate than farcical. We watch Annie’s frustration grow along the edges of her face, and we grow angry for her. In a number scenes like this, the movie pushes our emotions in a certain direction too forcefully, even if we don’t want to pushed that way.

In all, the awkwardly titled “Juliet, Naked” collects another dependable performance out of Byrne, a raggedy character part for Hawke and gives O’Dowd the chance to play awful boyfriend material, but it’s not enough to fall in love with. The story’s predictable arc doesn’t leave enough to the imagination, and like Annie, we might start hoping for change just to shake things up in this sleepy plot. 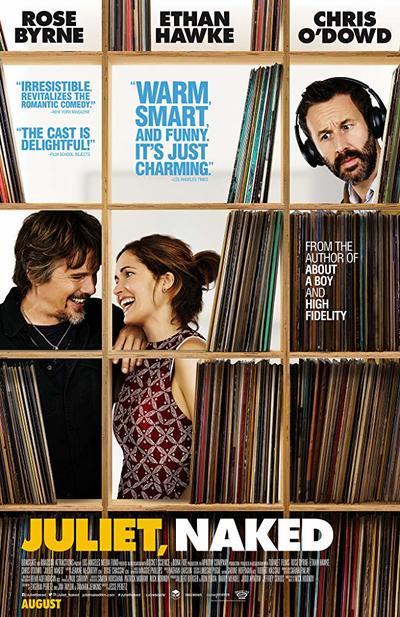