In most of "Jug Face," Lauren Ashley Carter cleverly uses her "Bette Davis Eyes" a.k.a. Susan Sarandon eyes: bulbous yet seductive, ingenuous, and most compelling. Judy Garland had them, too. But when Ada's (Carter) go all milky blue-white, that's when you want to look away from "Jug Face," for she's about to go into a trance as the spirit from The Pit takes her over. Say what? Yes, we're in a Gothic-Horror mode, with backwater residents that make the  "Deliverance" hillbillies look like Hamptonites.

The other time you might want to shut your own peepers and invoke your favorite protective spirit is when the slightly deranged local potter (Sean Bridgers) carves a "divine"-inspired image on his most recent jug. You have to hope it doesn't bear any resemblance to what you saw in the mirror while brushing your teeth: if it does, The Pit has a death warrant with your name on it. In the cult-like community tucked away in a spot that might be North Georgia or Tennessee (where the film's debut director is from), all hold to the belief that a hole in the ground with suspiciously reddish, sometimes gurgling, liquid contains a spirit that protects the group. The price of protection is human sacrifice. Ritual throat-slitting on the edge of the pit forestalls disaster.

In this moonshine-making community, dinner is roadkill if you're lucky. The poverty is so extreme they don't need any extra grief. The ritual is not fully explained, but a prologue shows a brief visual allegory: animated crayon drawings of the beginning of some sort of religion: a priest, families in prayer by the side of the pit, women in bonnets with a Puritan look. The sequence adds another layer to poet William Carlos Williams' famous description: the "pure products of America go crazy—/mountain folk from Kentucky/or the ribbed north end of Jersey."

"Jug Face" marks the writing and directing debut of  Chad Crawford Kinkle. He won a screenwriting award at the Slamdance Festival for this script, which he says was inspired by a pottery museum in North Georgia. His is not a name that you can make up, or easily forget, and I'm sure we'll be hearing it again. "Jug Face" is not uniformly polished, yet it's a breakthrough, not so much for gore, or terror, but because the director can truly do tension, maybe a harder trick to pull off.

"Jug Face" starts with one of those chasing-through-the-woods, near-date-rape type sequences, but Ada exercises a tad of free will and assents to the deed, which happens to take place near The Pit.  Bubbles and gurgles indicate that the pit is not happy with the event (which is intercut with the potter at work in his studio—a nice touch). A few scenes later we learn that her brother Jessaby (Daniel Manche) is the fellow she messed with. Beat.

Sometimes it seems Ada may successfully break for the border; other moments find her trapped in the web of heritage, kept in check by the strong-willed, mean mother Loris (Sean Young, of "Blade Runner"). Loris administers a primitive vaginal exam, lit cigarette in hand, to ensure Ada's virginity before marriage—or being "joined" as the community calls it—to a fellow Ada doesn't care for. It's terrifying. Ada is a gothic heroine, all right, in more ways than one.

And when Ada discovers her face on the latest jug, she buries it, hoping to escape her fate(s). She has other reasons to want to live. We root for her. She is spunky and also compassionate. She shows kindness toward her grandfather, who lives alone in a trailer. We also like the goofy potter, Dawai (Bridgers). You can't shoot the messenger when he's wearing taped-up eyeglass frames.

On the down side, there are too many stupid-looking shots of the gurgling pit, and dialogue only a movie hillbilly could cotton to. "The pit wants what it wants," says Sustin (actor-filmmaker Larry Fessenden), Ada's father—a notorious quote from Woody Allen with one word changed. A wraithlike presence from the spirit world is silly and slight, even given the film's obviously low budget. After all the thrills, chills, and jumped up machinery in both big and little films these days, there's not too much that can shake us up; show me something I can't get anywhere else, like "Jug Face's" rare joyful hillbilly dance sequence, with heels-tapping and spoons clanking.

None of this should suggest that "Jug Face" won't be the Midnite Show at your local cinematic Horror House. It will be. 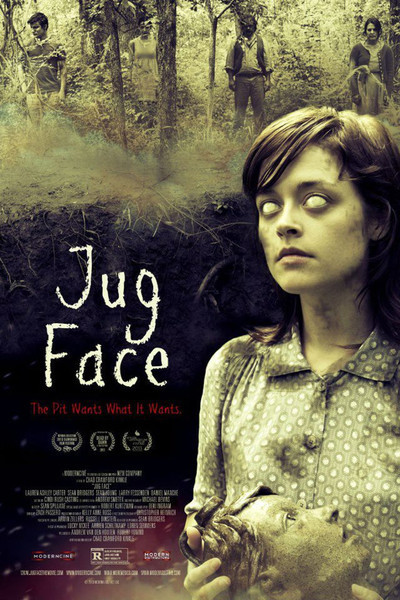