“Judy & Punch” is about a megalomaniac, self-aggrandizing con man whose primary motivation is riling up his audiences so he can bask in their adoration and applause. He is merciless in the verbal and emotional abuse he inflicts upon the people he supposedly loves, and he has the sociopathic tendency of believing his own lies to justify his horrific actions.

If you’ve had enough of that personality type over the past several years, you’ll be forgiven for feeling apprehensive about “Judy & Punch.” But the debut feature from Australian writer/director Mirrah Foulkes eventually provides enough of a revenge fantasy to satisfy, even if the road there is a bit windy and bumpy.

The actress-turned-filmmaker offers an intriguingly anachronistic take on the origin of the traditional British Punch and Judy puppet shows, mixing influences ranging from a Leonard Cohen song to one of the most famous lines from “Gladiator” within its 17th-century setting. Even the fact that the film takes place in a rustic village called Seaside—which we’re told in an opening title card is somewhere in the countryside, nowhere near the sea—is an early indication of its playfully surreal tone.

Within this scruffy yet scenic locale, puppeteers Punch (Damon Herriman) and Judy (Mia Wasikowska) pack in rowdy crowds for their rollicking shows. But it doesn’t take long for us to recognize that the male puppet flailing upon the female in the name of laughs is a theatrical manifestation of the couple’s real-life dynamic. Backstage, when Judy asks Punch whether the act is turning too violent, he responds cheerily: “They like punchy and they like smashy.” Punch can be charismatic but he’s also an unreliable, raging narcissist; Judy, meanwhile, is not only the true talent behind the operation, she’s also doing nearly all of the parenting of the couple’s infant daughter. As Punch’s anxieties and sense of self swell in anticipation of the talent scout he expects to swoop in and whisk them away to the big time, his drinking also increases, magnifying all his other flaws. One bad decision leads to another leads to a stunning tragedy; revealing more would be unfair but suffice it to say that the family, and their act, get upended.

But this event is also the catalyst for Judy to assert herself and her formidable intelligence, spirit and wit. Wasikowska is the picture of feminine patience and wisdom, a welcome source of stability in a volatile town teeming with drunkenness and ruled by accusations of witchcraft. (It should come as no shock that on public stoning day, Punch is the one who literally casts the first stone.) But the path to her ultimate victory in this centuries-old #MeToo tale is frustratingly uneven.

Foulkes certainly shows ambition in trying to tackle such tricky subject matter in ways that are both darkly funny and viscerally true, but the way she veers between those tones can be awkward. Harriman makes a strong impression from the get-go, but his Punch is almost cartoonishly craven and vile; he doesn’t seem to have a single redeeming quality beyond his engaging showmanship, and Judy seems too smart to have fallen for him. (The guy is mean to dogs! That alone should disqualify him.) Jaunty music plays as a sweet, elderly couple is framed for Punch’s hideous misdeeds, and it’s uncomfortable in a way that perhaps Foulkes didn’t intend. “Judy & Punch” eventually turns its attention toward themes of police brutality and injustice within its fairy-tale setting, but it does so within a montage that includes grungy outcasts in Renaissance dress performing tai chi in a misty, mossy forest.

The style is certainly there, with right-to-left camera movements tying all the film’s threads together within a tangible sense of muck. And yet it feels like Foulkes is trying to cram it all in with her debut effort, making the film too frequently feel jumbled and inconsistent, which depletes it somewhat of the deliciousness of its final punch. 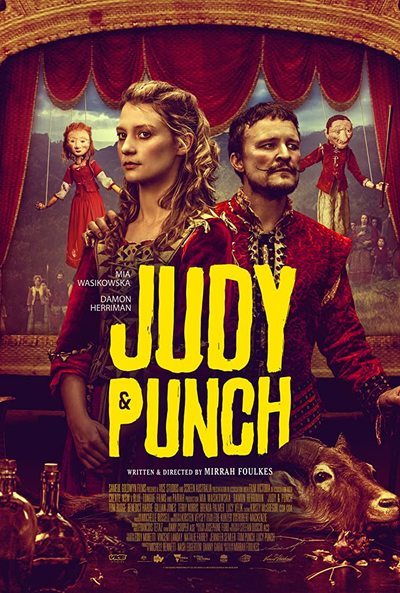