The title character in Clark Johnson’s “Juanita” is a woman some of us might recognize. She feels cheated by the hand that life has dealt her. She looks tired at her job in a hospital and at home watching her granddaughter. Her three grown children have disappointed her in different ways. Her eldest son is behind bars, her younger boy is on his way to messing up his life by dealing drugs and her daughter had her baby young. Occasionally, Juanita lets her mind zone out for a sexual fantasy but something always seems to interrupt her. She wants—no, needs—to get out of Columbus, Ohio. To her, it doesn’t matter where she goes as long as it gets her out of here.

I sympathize with Juanita’s wanderlust. I’ve also taken trips where I don’t quite know where I’m going. It’s like following a panicked need to escape, to get away from my surroundings and bad memories before they destroy you. However, I can’t say that I’ve resorted to picking a random spot out of thin air like when Juanita picks out “Butte, Montana”—which she pronounces as “Butt” for what I assume is a joke—as her destination. It’s the first warning sign that this movie also doesn’t know where it’s going or why it’s going where it goes.

The only thing keeping this movie from completely driving off the road is Alfre Woodard, one of the few actresses who could make some sense of this mixed-up Juanita. There are two personalities at play in the character. One, is a more confident woman who will have no problem with sitting in a roadside cafe and berating the owners until they change the menu for her. The other is much more vulnerable, someone who has had to toughen up to deal with life’s sharp turns but has kept their sense of kindness intact. It’s jarring to see the two fight over which version of Juanita will be in the scene, but Woodard’s performance lessens the feeling of screenwriting whiplash. She’s focused, even if the narrative is not. Ultimately, even she can’t save the movie from all of its flaws.

The movie’s script is its biggest weakness. Based on the book “Dancing on the Edge of the Roof” by Sheila Williams and written by Woodard’s husband, Roderick M. Spencer, the story is wildly uneven. An “Up”-like animated sequence of Juanita’s life story opens the movie, filling in her backstory. Then, she breaks the fourth wall to introduce the characters in the movie and explain her frustrated state, and the tone of the movie shifts from sweet to sour. There are cheeky appearances from random characters that feel more cloying than fun. In her fantasies, which happen irregularly, she imagines enjoying a romantic time with Blair Underwood, and then he inexplicably breaks her own dream by asking her for money like her kids. Juanita wants to get out of the city, but complains about doing so. Where are we going with all of this and when will we get there? I want to get out.

Along the way, Juanita makes friends, perhaps finds (real) love with a Native American chef (Adam Beach) and gains a new perspective on life. However, the way “Juanita” handles the epiphany is less than revelatory. The movie ends on an ellipses, not by choice but as if it didn’t know what note to end on. It would have been interesting to see a better version of a working class “Eat Pray Love” or “How Stella Got Her Groove Back” that swaps thrilling destinations outside the U.S. for a bus ticket somewhere in the States to reconnect with who you are. “Juanita” feels like an approximation of this experience. 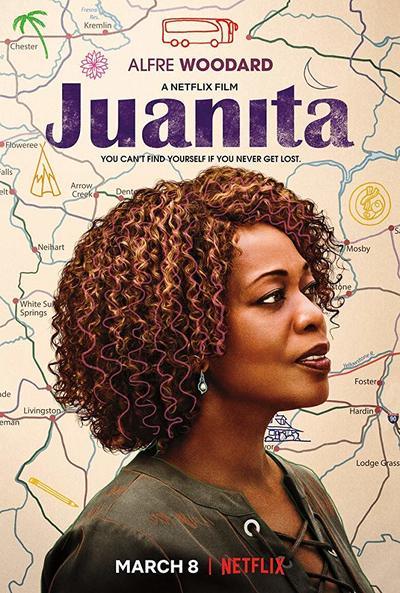