There are any number of thrilling passages in “John Wick: Chapter 3 - Parabellum,” but a moment of true inspiration—when you know that you're in the hands of filmmakers who are intent on creating a work of wit, style, and vision—comes relatively early. Our hero, soulful assassin John Wick (Keanu Reeves), is at the New York Public Library to find a very specific book when he's interrupted by one of the approximately 11 million people who will attempt to kill him over the course of the next two hours of screen time. Eventually John kills him by utilizing the book he's holding as a weapon. That part is great, but the moment of true inspiration comes next when he goes back and replaces the book on the shelf where he found it. This detail works not because it is funny, but because it fits the character so perfectly that it would almost be weird if he didn’t do it. In a genre where impersonality is the name of the game more than ever, it's a delight.

In the original “John Wick,” we were introduced to Wick, the recently widowed former member of a shadow cabal of assassins governed by the rules-obsessed High Table, who was spurred back into action when connected punks killed the dog left to him by his late wife. In "John Wick: Chapter 2," he was still enmeshed in the world that he had successfully left behind and at the end, he killed a member of the High Table while on the grounds of the Continental Hotel, an establishment designated as a safe ground for those in the assassin trade. This move leads to his being designated “excommunicado” by the High Table—all of his rights and privileges are stripped away and an open contract is issued for one and all on him with a payoff beginning at $14 million—though colleague Winston (Ian McShane) gives him a one-hour head start, partly out of friendship and partly, it appears, for his own amusement.

Granted, this is not quite as generous as it sounds since it appears that everyone in the Wickiverse, at least those with speaking or bleeding roles, is an assassin themselves. Wick’s plan is to make his way to Morocco in the hopes of tracking down the secretive leader of the High Table in order to make a personal offer to atone for his grave transgression. Although no one in the organization is supposed to offer any assistance to Wick, he does receive some aid from a couple of people from his past—his onetime mentor (Anjelica Huston) and Sofia (Halle Berry), a onetime killer who now runs the Morocco branch of the Continental and owes Wick for a past favor. While he is off trying to find the head of the High Table and fighting off all comers, another member of the organization, known only as The Adjudicator (Asia Kate Dillon) arrives in New York to set things in order and punish both Winston and The Bowery King (Laurence Fishburne) for daring to aid Wick. To help carry this out, they enlist the services of Zero (Mark Dacascos), a sushi chef with an endless array of deadly ninjas at his service, all of whom seem giddy at the possibility of fighting the legendary John Wick.

When the original “John Wick” came out, audiences expecting just another dopey action film were shocked to find that it was a borderline brilliant work that contained an unexpectedly smart and funny screenplay, a performance from Keanu Reeves that bordered on the sublime in the way that it properly utilized his unique persona, and action sequences so stylishly executed that they reminded viewers of the best works of such genre masters as Walter Hill, John Woo, and Luc Besson. Amazingly, the follow-up managed to more than clear the high bar set by its predecessor by doubling down on the action beats and by expanding the film’s universe in fascinating ways. If the original “John Wick” was “Mad Max”—a work that transcended expectations to become an instant classic—"John Wick: Chapter 2" was “The Road Warrior,” a work that took off from an impossible-to-top source and proceeded to top it.

As it turns out, “John Wick 3” is not quite the “Fury Road” of the series but is easily its “Beyond Thunderdome,” a work of pop cinema so blissfully, albeit brutally, entertaining that you come out of it feeling even more resentful of its multiplex neighbors for not making a similar effort. The problem is not with the staging of the action scenes—director Chad Stahelski (the former stuntman who also directed the previous installments), along with cinematographer Dan Laustsen, and production designer Kevin Kavanaugh, present us with an endless array of stunning visuals and stuntmen, wreaking gloriously gory havoc with everything from guns and knives to the aforementioned book and even a horse. Where the film does stumble a bit, however, is that the attempts at further world-building are not quite as inspired as in the previous films. The Adjudicator, for example, seems like an interesting idea for a character but nothing much comes of their presence—Dillon is fine but pales in comparison to previous memorable franchise characters played by the likes of Adrianne Palicki and Ruby Rose.

Still, there are a number of wonderful elements on display in "Parabellum." There's Reeves, whose ability to make the most out of the least amount of dialogue would leave the likes of Bronson and Eastwood agog. There are moments of unexpected humor that blindside you—the location where Wick meets his mentor yields a bigger laugh than most actual comedies. And the consistently exciting fight scenes also yield a lot of big laughs, especially during the kills where Wick is forced to use something other than a gun. Oh yes, I almost forgot the dogs. Halle Berry's character is accompanied by a couple of dogs who go on to steal practically every frame of film featuring them, more than holding their own during one of the movie's big fight scenes. No, I haven’t seen “A Dog’s Journey” yet, but if you see only one movie sequel featuring dogs this weekend, I guarantee that “Parabellum” is the one to beat. 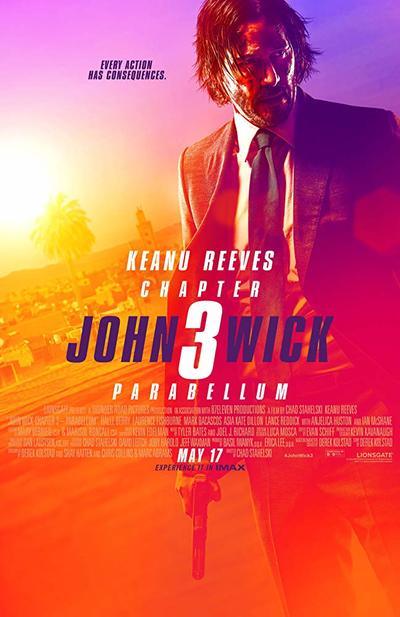 Rated R for pervasive strong violence, and some language.

Laurence Fishburne as The Bowery King

Anjelica Huston as The Director

Saïd Taghmaoui as The Elder

Asia Kate Dillon as The Adjudicator