The chasm that exists between most 21st-century Americans and their dead is unnatural. For the majority of human history, death has been a normal, even mundane, part of life: The term “wake” comes from the tradition of bodies spending an extended period propped up in the parlor before burial. (You have to make sure they’re really dead.) “Jethica” seems like a movie made by people who already knew that morbid fact. And the film’s oddball point of view—which includes its own kooky-poignant vision of the afterlife—is its most appealing trait.

“Jethica” has a casual attitude towards death and interacting with the dead that is, in a word, witchy. This is a witchy movie all around, featuring multiple scenes of its protagonist lighting candles on her altar and some practical necromancy that’s presented in the same nonchalant tone as scenes of characters pumping gas. Director Pete Ohs collaborated with his cast to create the screenplay for “Jethica,” and the cacophony of voices in the script evokes the cacophony of talkative spirits hanging around the movie's edges. This is a strange film all around, distractible and full of Olympic-level tonal gambits. Viewers’ mileage will vary. Wildly.

Even the framing device is odd: “Jethica” opens with Elena (Calle Hernandez) hooking up with a guy in the backseat of his car, then begrudgingly humoring his plea for her to tell him something, anything, about herself. And so she tells him a story about the time she was laying low in her grandma’s trailer—you’ll find out why—in the middle of hardscrabble nowhere outside of Santa Fe. In a coincidence that strains credulity far more than any of the film’s supernatural elements, shortly after her arrival in New Mexico Elena runs into an old friend from high school, Jessica (Ashley Denise Robinson), at a deserted gas station. Elena approaches Jessica with friendly intentions and gets an evasive response. Still, the offer of an isolated hideout seems to appeal to Jessica, and she agrees to follow Elena back to the trailer.

There, Jessica confesses the reason for her shifty-eyed impromptu road trip: She’s fleeing a stalker, Kevin (Will Madden), who tracked her across the country from Los Angeles to Santa Fe. (Kevin has a lisp, which explains the film’s title.) As it turns out, Elena is uniquely qualified to help: She’s a witch, and her grandma was too. The trailer is protected by a spell, and no one, living or dead, can breach it. Now, Elena’s powers don’t extend to banishing the ghosts who wander around her grandma’s property, distinguished from the living by their lost expressions and a layer of gray foundation. But the ghosts might be able to help Jessica with her Kevin problem.

“Jethica”’s ghosts are lonelier than its living humans overall, mostly because they’re only able to touch each other. (Their hands pass through the living, like in “Ghost.”) Other than that, there’s not much difference between the living and the dead in this film. Both are hanging around, purposeless, haunted by the past, and paralyzed by the future. And the film’s quirky, sardonic approach to its ghost story is refreshing, as is the lack of fear with which its characters confront the dead people in their front yard.

Ohs’ sense of humor recalls that of “May”’s Lucky McKee or “Excision” director Richard Bates Jr., but drier. And, as with those directors, when one of Ohs’ jokes lands, it really lands. And when it doesn’t, it really doesn’t. “Jethica”’s comedic instinct is to make Kevin the butt of the joke, which seems right; if anyone should be mocked here, it’s the psycho stalker. But the way Ohs and his co-writers go about this is by letting Kevin rant at length about how he just loves Jessica so much and one day she’ll see that we’re meant to be together—a tactic that simultaneously repels the audience (seriously, he’s really annoying) and softens the edges of Kevin’s crimes.

At one point, Madden paces and monologues for a full four minutes, which highlights the film’s other fatal flaw: Even at a trim 70 minutes, “Jethica” feels padded out, like a great 30-minute short rattling around inside of a feature film. In practice, this means lots of lingering shots on the mountain valley that surrounds Elena’s grandma’s trailer. Again, this impulse is understandable: An independent film has to get its production value where it can, and the stark New Mexico landscape in winter does add significant natural beauty to the movie. But it also slows down an already unhurried film.

The best way to describe “Jethica” is as a deadpan comedy set in a horror-movie universe, with the upside-down morality and pitch-black humor that the description implies. Bits from famous horror movies are lifted for comedic purposes: Take the film’s use of Goblin-esque musical cues accompanied by Romero-esque shambling whenever a new ghost is introduced. This cheekiness is pleasing, and the originality of Oh’s vision cannot be denied. But it’s also impossible to ignore that “Jethica” is somehow both chaotic and slow—both, often, to a fault. Still, an ambitious misfire is always preferable to something safe and flavorless. And nothing about “Jethica” is safe.

Now playing in theaters and available on Fandor on February 14th. 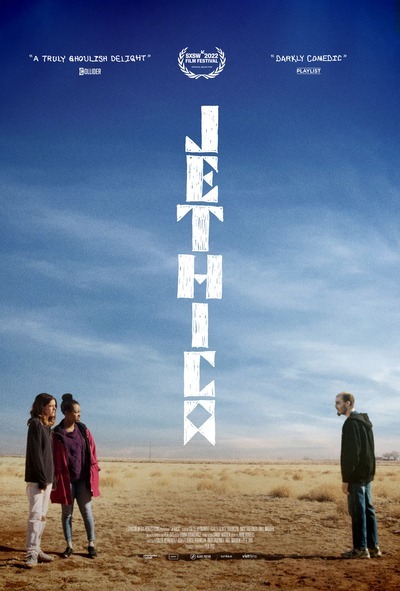 Will Madden as Kevin