Writer/director team Doron and Yoav Paz deserve credit for a novel premise. Who else has gone so far as to suggest that there is a gate to Hell in the heart of Israel that, once opened, allows emaciated zombies with black devil wings to attack humans of every major religious denomination? Too bad the Paz brothers do not go farther than that. Their films takes lazy, basic potshots at American exceptionalism whenever its tourist protagonists pause to objectify their surroundings by either photographing or benignly condescending to locals. "JeruZalem" also features some lame, undeveloped commentary about the distance that social media puts between users and their natural surroundings. But even that feels like a weak stab at commentary. Nothing about "JeruZalem"—do you get it? The capitalized "Z" is for "zombies!"—is aggressive or specific enough to touch a nerve.

Since the events of "JeruZalem" are presented through the lens(es) of Sarah (Daniell Jadelyn), a meek—but horny!—twenty-something, we literally see the Old World through the eyes of an incurious, Information Age outsider. Sarah and her generically peer-pressure-enabling best friend Rachel (Yael Grobglas) are dismissed as hormonal young people before they even get started on their journey. They not only arrive to the airport late, but almost immediately change plans and take a detour to Jerusalem with tediously troubled introvert Kevin (Yon Tumarkin), a wannabe archaeologist who claims to be interested in religious customs (ie: he trawls the "Darknet" portion of the Internet, and puzzles over "classified" videos of a real-life exorcisms). Rachel and Sarah gawp at gorgeous minarets, labyrinthine outdoor passageways, and tourist attractions whenever they're partying or getting ready to party. They even admit that they're there to have fun early on when Rachel goads Sarah and forces her to admit—on the same Google Glass camera she uses to Skype with her stereotypically overweight, over-protective father—that she just wants "a taste of [Kevin's] ass." The apocalypse happens a little after the halfway mark of the film, so strap yourself in, "JeruZalem" makes you earn your first glimpse of fairy-zombies, or whatever those weird-looking things are supposed to be.

Seriously, what are these silly-looking zombies supposed to be? Any really good horror movie sinks or swims based on what its creators do with their antagonists since bad guys typically serve as an extension of the film's setting, and therefore as a foil that the main protagonists can bounce off of. "JeruZalem" does not give us any of that good stuff. The film's bewinged zombies have next to nothing to do with a barely dealt-with monkey's-paw subplot involving Sarah and her dead brother Joel (she wishes he would come back when she visits the Wailing Wall). In fact, most of these zombies aren't treated like anybody's loved ones, or representatives of the religious tension that the film's ponderous introductory voiceover spiel warns viewers of. Go on, you listen to the speech that opens this film, and, after struggling to stifle comparisons to your least exciting Sunday school teacher, try to tell me that this film doesn't set out to address Muslim/Christian/Jewish tension in the Middle East. You won't get that kind of critique in "JeruZalem" because the Paz brothers are so much more interested in skin-deep jump scares that they fail to develop their characters, both undead and alive.

Heck, even if the Pazes set up one type of social commentary at the start of their film, and then meekly launch into a completely different direction—I don't know, social media is bad because it's a distraction that we think really helps us see the world better, or something?—"JeruZalem" would still be a failure. There's not much to the film's lead protagonists since Sarah is so keyed-up that she heedlessly flirts with Jewish soldiers even while hanging out with Kevin, and Kevin is just a ticking time-bomb who inevitably warns his companions that they're all in danger, and must flee the city immediately.

Worse still, while the film's gimmicky Google Glass premise does allow the Pazes to film events with some surprisingly sturdy shaky-camerawork, the rest of their film is not so imaginative. There's a lot of generic foreigner-types that attack and berate our American surrogates, like when Rachel's boy toy Omar (Tom Graziani) incredulously declares "You Americans are so naive ... but you know how to party!" And a lot of similar-looking zombies growl and attack the camera in a series of monotonous scare scenes. Also, there's some building-tall giants wandering around in the film's background, too, I guess? "JeruZalem" could have been clever and vicious, or meek and superficially engrossing, or just good and upsetting, but it's not exactly any of these things. 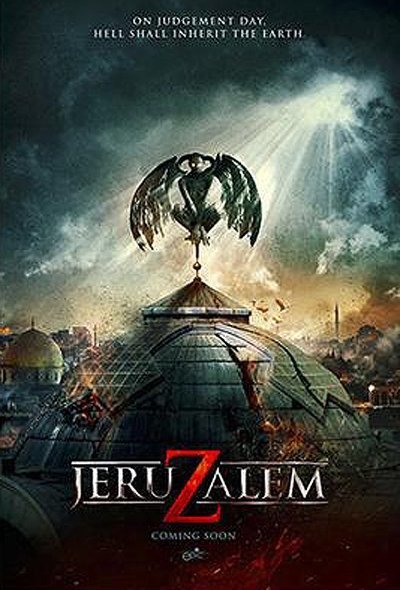 Rated R for horror violence, language throughout, some sexuality/nudity and brief drug use.