“Jerry & Marge Go Large” starts as a breezy character study about a couple who basically fall into an unexpected news story late in life. Loosely based on a true story, it’s tells of a married pair who exploited a fascinating flaw in a national lottery and didn’t use their winnings to buy a McMansion or travel the world—they reinvested the money they grifted off the system into their small Michigan town. What a cute story, right? And, for a while, the overall charm of the tale and the always genuine performers who play the title characters keep the film together. However, writer Brad Copeland and director David Frankel simply don’t trust Jerry and Marge. They clutter their sweet tale with unnecessary enemies in the form of a clan of Harvard rich kids who discover the same loophole, and the film ends up getting less interesting as it lopes to a rather bland finale. I wanted to just hang out with the Jerry and Marge of the first act, two people trying to figure out what’s next in life, before the movie gave up on subtlety for TV movie plotting.

The film opens with Jerry (Bryan Cranston) being forced into retirement after 42 years on the job. His wife Marge (Annette Bening) tries to encourage Jerry to enjoy his golden years. His family, including son Ben (Jake McDorman) and daughter Dawn (Anna Camp), even gets him a boat, which he accidentally damages trying to get into the water. Jerry is a creature of precision, and his brain clicks into a new gear when he looks at the odds on a slip for a lottery called WinFall, realizing they could be in the buyer’s favor under certain conditions. The simplest way to put it is that buying enough tickets would reduce the luck variable to a degree that favored the buyer every time. And so Jerry and Marge start doing exactly that, buying thousands of tickets at a time, even getting friends from their town like Jerry’s accountant (Larry Wilmore) and a fella named Howard (Michael McKean) in as investors. They end up having to drive to another state to continue their scheme, eventually roping in a gas station attendant (Rainn Wilson), who’s only in the movie for a little more comedy. And I mean a little.

Cranston and Bening add believability to the first act of “Jerry & Marge Go Large,” finding truth in the set-up of people forced into new life patterns. Jerry has gone to work every day for over four decades. What does he do now with his time? Bening has a few lovely beats as she captures a woman who wants to find new adventures with her husband and realizes that she thinks something is beginning while he’s focused on what’s ended. Cranston is also deeply likable, even if Frankel resorts to a few too many “wacky old man” routines.

The problems start with the introduction of the Harvard kids who have also figured out the WinFall scheme. Led by a smarmy student named Tyler (Uly Schlesinger), they’re a boring antagonist that makes the film into a much shallower venture than it initially promises. There’s a version of “Jerry & Marge Go Large” that’s more like an early Tom McCarthy film, a movie that takes itself seriously as a character study instead of resorting to the simplicity of a generic comedy. Everything starts to feel as calculated as Jerry’s plan, even before the final scenes that make one realize there wasn’t really enough to this story to justify a feature telling of it. Actually, there may have been enough in those early, humane scenes about the uncertainty of retirement, but Frankel wasn’t interested enough in that movie. The truth is that he should have gone small. 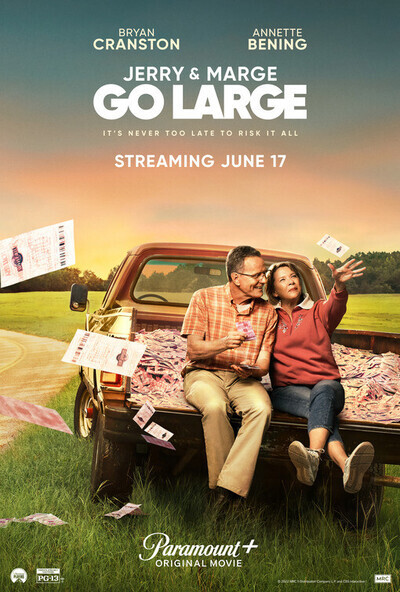