“Jeen-Yuhs: A Kanye Trilogy” is an extraordinary fiasco in the history of documentary filmmaking, a treasure trove of footage of superstar Kanye West’s rise to greatness mishandled by a documentarian who keeps it all way too close to his chest. For fans of West, it’s as simple as this: the epic docuseries is almost five hours long, spread out across three feature-length acts, which will be released once a week starting today on Netflix. It only mentions the album My Beautiful Dark Twisted Fantasy once, barely. The docuseries' main cameraman was not there for that definitive album’s creation, so it’s just not a priority to what “Jeen-Yuhs: A Kanye Trilogy” is actually about.

The game-changing creative evolution of West is secondary to the series’ main interest—the access that cinematographer Coodie had to the epic saga of West’s career, which started when West was a rising, hungry beat maker and producer in Chicago. Co-directed by Coodie and Chike Ozah, “Jeen-Yuhs” subtitles itself “A Kanye Trilogy” but it’s really the personal log of someone tired of only being the cameraman who followed around West across two decades, and sometimes directed him (Coodie and Ozah did West’s music video debut, “Through the Wire”). Now he wants to be the star of the show. The baffling experience of “Jeen-Yuhs” is to watch Coodie prevail as a cameraman—capturing West’s hustle from producer to rapper to icon, filming eureka studio moments with the ease of everyday life—and then fail his billionaire subject matter’s legacy as a documentarian.

There are so many frustrating moments in this profoundly incomplete Wiki-page of a docuseries, written in first-person—so many cut corners, so many unnecessary diversions into Coodie’s own life, including a look at his stand-up career—so let’s focus on what does make the docuseries special. “Jeen-Yuhs” will captivate some fans just by existing, by taking them to the brink of a musical movement that officially began with Kanye West’s first album, College Dropout. Here are moments of brilliance that shaped modern American music, time capsules of a creator evolving into his own brilliance and planet-swallowing narcissism. Over and over, it’s the intrigue of watching Kanye West, a future billionaire and self-appointed messiah, trying to get the attention of Roc-A-Fella record employees by rapping “All Falls Down” for them in their offices. Or here’s Kanye West eating at Burger King after getting the call that he finally got signed. “act i: VISION” does have a laugh-out-loud moment when we see Kanye West react to how much it costs to buy a porno mag in Times Square, and then he buys it. Meanwhile the appeal of this documentary is not about a great narrative structure or thematic plan, it’s that we haven’t seen this footage before, in part because only Coodie had it.

The footage itself is incredibly raw, which can make the journey cozy and welcome like a home movie about a self-proclaimed Muhammad Ali. There’s something striking to how Coodie is often the only one filming and how it makes for extensive scenes of just watching West opposite the likes of Scarface (trying to win him over with the beat for “Jesus Walks,” with West’s retainers on the table) or the mighty sweet moments he has with his mother Donda West, trying to make her laugh while recounting how he came up with Jay-Z’s “H to the Izzo” hook. If this is the kind of stuff that intrigues you—and you do need to bring your own Kanye West literacy to the saga—then these raw moments will likely work. You may not even mind that they run for about as long as possible, and that sharper filmmaking would know how to make certain moments sing by making them more acute.

The series’ selectively limited scope is most felt in “act iii: AWAKENING,” which condenses the rest of Kanye’s career after College Dropout more or less into 95 minutes. Coodie films West in the later end of 2010s, and he has a front-row spot again to albums like 2019’s Jesus is King, or the Madison Square Garden listening party for 2016’s The Life of Pablo, while also capturing West in creative isolation not long after his tearful press conference for his 2020 presidential campaign. To do this, the doc skips over entire creative movements and albums like Yeezus in a tornado of grainy, fast-cutting clips about his life in the media. No large point is made except to remind us of how long we have known West in the public eye, of his relationship with Donald Trump, of the many different ways his mental health can be connected to becoming such a polarizing world-renowned artist who craves the eyes on him. And its introspection concerning such an outspoken wordsmith’s career only comes from Coodie’s sleepy voiceover with rough-draft anecdotes like this: “But I guess things change when you get famous.”

“Jeen-Yuhs” is revelatory in depicting how anti-insightful a documentary can still be without narrative tact, even if its story takes place over nearly two decades. Its hollow approach underestimates one of the through-lines right there in the edit: the friendship that exists between Coodie and West. In the beginning Coodie gives a young West the first glow of spotlight, the power of being filmed. Many awards and countless songs later, in one incredible moment depicting how friendships change, a drunk, Grammy-anointed West keeps confusing Coodie for his collaborator Chike while Coodie interviews him on camera. But the story has little to say about this special friendship, rather proving that Coodie shows up whenever he is called upon; that West’s greatest sin is whenever he doesn’t invite Coodie along. For all that Coodie’s intimate camera gets to film, West remains opaque, especially in what Coodie even means to him.

It’s not often that you can specifically knock a documentary because it wasn’t made by somebody else, but then again “Jeen-Yuhs” is singular in what makes it such a disappointment. “Jeen-Yuhs” recklessly breaks unwritten rules about doc filmmaking, about how to best frame someone else's story, and for no larger purpose than to serve its creators. The irrelevant parts within "Jeen-Yuhs" are made only more obvious by Kanye West’s actual, monumental relevancy, and the missed opportunity for Coodie’s hard-fought footage to amaze viewers by speaking for itself.

Part one is now playing on Netflix, with a new act arriving each week. 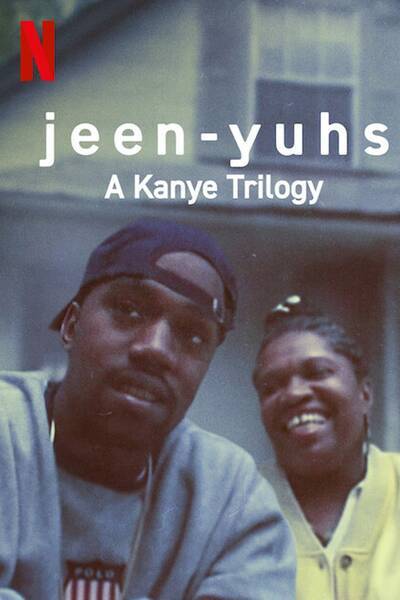 Kanye West as Self