[Ed. Note - This review discusses a few scenes in detail that could be considered spoilers. You've been warned.]

We have seen countless stories of how responsibility can forge maturity in young men. People often don’t reach adulthood until they’re forced to do so by life. They don’t shake their demons because they wake one day and make that choice—it's often a decision forced upon them by rock bottom, or, in the case of the title character in Josh Mond’s stunning debut “James White,” because they cannot run away any longer. Responsibility can make adults of us all. Few films have captured that arc as cinematically as “James White.”

The film opens with loud music and an extreme close-up of its title character (Christopher Abbott), sweaty, bobbing, almost closing his eyes. He’s messed up; drinking, talking, and stumbling through the halls of a club. He downs another alcoholic beverage and stumbles onto the street to reveal daylight, a major city going through its day. He’s probably been there all night. And he’s going to a Shiva service at his mother’s house for his recently-deceased father. Even he looks a little ashamed at his lack of responsibility. The death of James’ estranged father will not be the event that shakes him from his destructive patterns. They weren’t close—he meets his father’s new wife for the first time after his death—and he’s not ready to break free. Between sittings, he yells at a woman at a bar, gets into a fight, and goes clubbing again, hooking up with someone new. Then it’s back to the grief. This is James’ life—cycles of pain and doing anything to numb that pain.

We can tell early on that James is close to his mother (Cynthia Nixon). He has been with her before as she has undergone cancer treatments, but she seems better now. He tells her that he’s going to Mexico to get his shit together after his father’s death, and he’ll come back a new man. While he seems to be recovering south of the border, he starts seeing a young tourist named Jayne (Makenzie Leigh), but is forced to return early when his mother’s cancer resurfaces. They’ve been through this before, but something in her eyes looks different this time.

At first, James reverts to a few of his selfish ways. He’s surprised that his new girlfriend doesn’t sacrifice everything for him. He drinks. He lashes out at his best friend Nick (Kid Cudi). But then reality sets in when he learns that his mother needs hospice care and not a hospital. There will be no more treatments.

“James White” is a masterful examination of how our behavior and the excuses we make about our lives fall away under certain, life-changing conditions. Most of us have dealt with grief, loss and pain in our lives, and it does something to you. It changes you. Hollywood has long told stories of losers made into winners through tragedy, but “James White” charts that trajectory in its own way, unafraid of the ugly truth of death. Mond shoots almost entirely in close-up, bringing us right into the face of James White, as unable to turn away from his story as he is. It wouldn’t work without the revelatory performance from Abbott, who commits to every emotional beat without making White too much of an asshole to make his redemption worthwhile. He's matched by fearless work from Nixon, doing the best work of her career.

Mond also carefully refuses to play into melodrama to define the arc of his character. There are no great revelatory scenes in “James White,” although there’s one later on that I believe qualifies as one in its own unique way; it’s also the most heartbreaking moment of the year. James, knowing his mother is dying and holding her at her most vulnerable, tells her an alternate vision of the future, one in which her cancer is gone. With his mother’s head against his chest, in a position his head likely laid on her chest as a baby, he tells her a story. It’s the most moving and powerful scene that cinema has produced in a very long time. “See me happy. See me as a father. See me as a kind and loving man.” He’s not just crafting a comforting dream for her, he’s giving himself purpose as well. He can now see those things as well, possibly for the first time. Through pain, he’s finding the direction he’s lacked.

"James White" is also about learning to experience the full range of emotions. There’s a key moment early in the film in which James’ mother says to him, “I’m just sad. It’s OK to be sad.” James is one of those angry young men who doesn’t understand that fact. It's often one of the last lessons we learn. James runs from sadness, responsibility and pain, numbing it with his own addiction. Until he can no longer run. The ambiguous ending will aggravate some, but James, a character we have almost always seen moving, bobbing and weaving through the film, isn’t moving in that final scene. I believe he’s learned it’s OK to be still and to be sad. In fact, it makes him a better person. 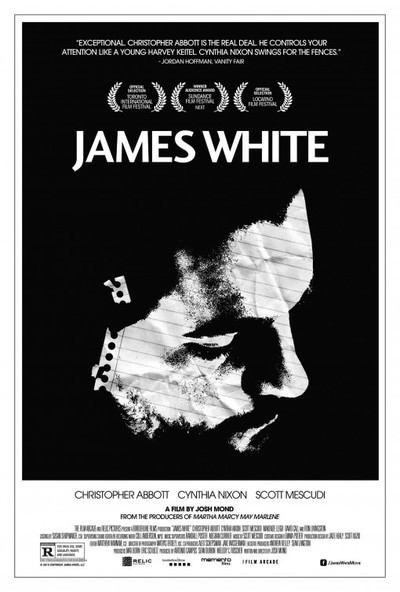 Rated R for drug use, some sexuality/nudity, and language.