It takes a while, but eventually the Japanese animated fantasy “Inu-Oh” becomes a by-the-numbers tragedy about two unsung performers. That’s frustrating given the fundamental disconnect between the movie’s music, which is defined by a brash, anachronistic glam/hair “rock opera” style, and its dance numbers, which pay homage to the mannered and comparatively restrained “Noh”-style of Japanese musical theater. Celebrating a traditional art form by papering over—and in some cases, stifling—its unique qualities isn’t necessarily a grave creative sin. But in this case, modernizing the work of two unsung Noh masters—a talented biwa player and his singer/dancer muse—sometimes proves too distracting.

Some essential liberties had to be taken with “Inu-Oh” since the movie’s a feature-length cartoon version of a novel about a pair of suppressed artists from 14th century Japan. This adaptation of Hideo Furukawa’s book, The Tale of the Heike: The Inu-Oh Chapters, attempts to represent the visceral impact and ultimately eulogize the loss of two singular Noh practitioners, the blind biwa player Tomona (dancer Mirai Moriyama) and the monstrous-looking masked performer Inu-Oh (real-life rocker Avu-chan).

Tomona’s story finds a sense of direction (and some urgency) after he hooks up with Inu-Oh (or “King of the Dogs”), a physically deformed amateur dancer who has one arm that’s several sizes too large and two mismatched eyes that seem to slide off his face like a Cubist painting. Inu-oh has been cursed from a young age, and now the only thing that can heal his tortured body is a series of soul-baring performances, all scored by Tomona’s biwa (and some accompanying taiko drummers).

The iconoclastic reputation these two fast friends develop by making audiences move to the beat of their music inevitably creates tension with a couple of stuffy, vain authority figures, particularly the star performer (voiced by Yutaka Matsushige) at the popular Hie-za theater troupe. Otherwise, a friendship between Tomona and Inu-oh develops during non-musical scenes, most of which are as dramatically flat as any incidental scene featuring Matushige’s character.

Your enjoyment of “Inu-Oh” probably depends on what you’re most focused on during Inu-Oh and Tomona’s musical performances. Most of the music in “Inu-Oh” was sung by Avu-chan, the leader singer of self-described “fashion punk” rockers Queen Bee. The movie’s musical numbers were also directed by the visually restless anime director Masaaki Yuasa (“Mind Game”), whose trippy, dynamic visual sensibility and keen attention to detail are complimented by character designs provided by Taiyo Matsumoto (“Tekkonkinkreet”). Matsumoto's feather-light style of drawing is distinguished by its unassuming, but deeply felt quirks.

Unfortunately, there’s a fundamental disconnect between these musical numbers’ raucous energy—specifically how they’re visually represented—and the music that we hear on the soundtrack, possibly because these scenes were first choreographed by Yuasa and then scored by composer Otomo Yoshihide. So while there’s some visual poetry on screen—thanks to the supervision of two Noh supervisors (Keizo Miyamoto and Hirotada Kamei) and one biwa composer (Yukihiro Goto)—it’s not always an intuitive match with the accompanying score, which was also enhanced by Goto’s supervision.

While the musical set pieces are uneven, they also give some essential focus and a much-needed snap to a fairly straightforward story that’s also immediately overwhelmed with expository dialogue. Thankfully, Yuasa is an inspired animation filmmaker, whose romantic view of the past takes clear (and acknowledged) inspiration from “Dororo,” anime godfather Osamu Tezuka’s delirious mid-1960s manga fantasy about a young thief and his companion, a cursed and monstrous-looking young swordsman.

Yuasa plays to his imaginative strengths whenever he develops the tone and dramatic potential of any given moment through rapturous, Tezuka-worthy visual conceits. Early scenes that shows us—sometimes literally—what the world looks like through Inu-oh’s eyes are especially compelling, and so are the better parts of any given musical number, when we see what Noh performers look like according to their rapt audience (and vice versa). Yuasa also seems most inspired whenever he highlights the ungainly features and rough line work that give Matsumoto’s characters their unique, sketch-like charms.

Then again, while Yuasa and Matsumoto’s styles are predictably a good fit—as they are in Yuasa’s anime adaptation of Matsumoto’s Ping Pong comics—Yoshihide’s music doesn’t really enhance or even match the images that it’s meant to illustrate. Noh theater, in any medium, requires audience members to focus on the poetry and emotional nuance of arch and highly physical performances. Yoshhide’s pompous and uninflected rock music unfortunately distracts from the delicacy and precision of these performances. 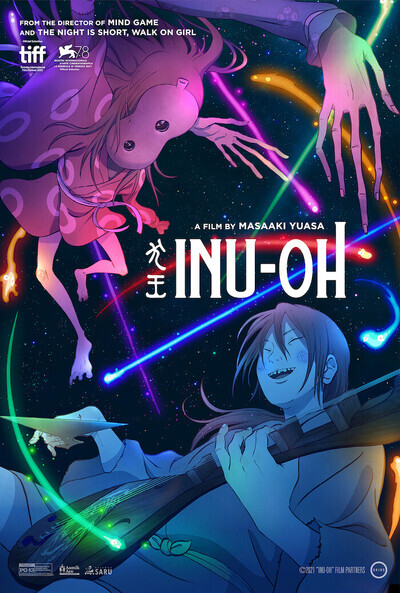