Given our national interest in all things weather-related, “Into the Storm” feels like an inevitability, almost a cinematic obligation to the country’s latest obsession, and it’s about as creatively inspired as that description makes it out to be. As we turn Weather Channel personalities into celebrities, marvel at the swaths of destruction left by Superstorms like Sandy and even tune into weather-related escapism like “Sharknado 2: The Second One” in record-breaking numbers, someone was bound to revisit the impact of Mother Nature on cinema. It’s been a long time since “Twister.” And so it’s time to toss cows through the air again and this time we’ll send school buses and maybe even a few airplanes after them. There are a few clever nods to another national obsession—documenting every aspect of our lives for posterity later and virality now—through a mostly found footage structure and the visual effects are surprisingly strong throughout, but the complete lack of interesting characters and almost no narrative at all makes for a film that’s hollow. The storm has more personality than the people who flee from it.

Said people include the square-jawed Vice Principal of the local high school, Gary (Richard Armitage), and his two sons Donnie (Max Deacon) and Trey (Nathan Kress). Donnie is the good kid, the one who plans to film the upcoming graduation ceremony for dad and pines for the prettiest girl in school, Kaitlyn (Alycia Debnam Carey). Trey is a bit younger and a bit more rebellious. Donnie finally gets up the courage to talk to Kaitlyn and the two head off to finish a project on Graduation Day, the same day in which a superstorm will devastate the area. Lesson? Don’t get up the courage to talk to the girl you like. It’s safer that way.

The locals—which also includes drunk, “Jackass” wannabes Reevis (Jon Reep) and Donk (Kyle Davis)—are joined on this fateful day by storm chasers headed by researcher Allison (Sarah Wayne Callies of “The Walking Dead” fame) and daredevil pioneer Pete (Matt Walsh), the inventor of the TITUS, a tank-like vehicle that can drive right into the eye of a storm, anchor itself to the ground, and film what has never been seen before, both for ratings and research.

Pete’s both a thrill-seeker and a researcher. In today’s world as reflected by “Into the Storm,” they’re one and the same. “Into the Storm” is at least half seen through the lenses of the omnipresent cameras of today’s world from iPhones to school security cameras to news helicopters to Allison & Pete’s staff. There’s something there, hidden beneath the noise and fury, about how we don’t just experience landscape-changing events like superstorms anymore, we chronicle them. I wish that element of “Into the Storm” had been more fully developed by writer John Swetnam but perhaps I’m giving too much thematic credit to something that was ultimately just a pitch—“A found footage disaster movie!”

The structure and impressive effects of “Into the Storm” could keep viewers entertained on a rainy weekend evening, but it’s the shallow, non-existent characterizations that keep it from working. Donnie and Trey need to be the relatable kids at the heart of a nightmare-nado, but they’re flat and boring, especially after poor Donnie and Kaitlyn get stuck under rubble before we’ve been given a reason to care about if they make it out or not. “Into the Storm” tells the too-true story of men and women who watch their lives forever altered by the unpredictability of Mother Nature although we’re never given a reason to care about these people any more than the faceless ones in the homes destroyed through CGI. Gary is a widow, Allison has a daughter, Pete is dying for that “big score,” etc. I’m not expecting deep character development here, but those brief descriptions are literally all you get. The survivors of the real-life storms that inspired this film, the personalities on The Weather Channel, even the damn non-characters of “Sharknado” are all more interesting. Give us the storms, but don’t forget to make those on whom they land interesting too. 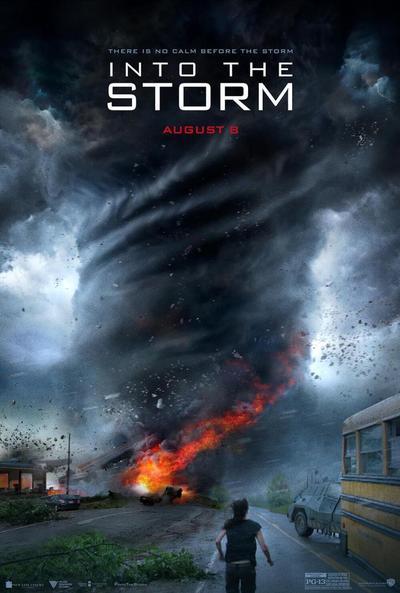 Rated PG-13 for sequences of intense destruction and peril, and language including some sexual references