Into the Dark: Pure

The first year of Hulu’s “Into the Dark”—which was recently renewed, by the way—ends with a film that could be a perfect example to show someone the overall quality of the series. There have been extreme lows (“Down”) and highs (“Culture Shock”), but most of the entries have been somewhere in the middle. Like a lot of these, “Into the Dark: Pure” has some interesting ideas and strong performances, but it fails to bring it all together into a complete package. And a ridiculous reliance on jump scares really destroys what should have been the most claustrophobic, intense “Into the Dark” so far.

In many ways, “Pure” is one of the timeliest films under this banner. As women’s rights and the #MeToo movement dominate the headlines, a film that deconstructs the controlling patriarchy embedded in the very concept of a “Purity Ring” fits the current national conversation. While its origins date back to ancient times of chastity belts and excommunication, the purity ring and associated pledge for young women to remain virgins until their wedding day is actually a relatively new phenomenon, gaining prominence in the ‘90s. The first official “purity ball” wasn’t until about 20 years ago. It’s time for a great horror movie to completely dismantle this sexist garbage that basically says fathers control their daughters’ bodies, although “Pure” isn’t exactly that movie.

The entirety of “Pure” takes the place on the weekend of a purity ball, a twisted ceremony in which young ladies have to hear sermons about their chastity, wear pure white dresses, and promise to their fathers that their bodies will remain untouched. Shay (Jahkara Smith) has accompanied her half-sister Jo (McKaley Miller) to this annual event with her newfound father Kyle (Jim Klock). Kyle had an affair with Shay’s mother and didn’t recognize the existence of his daughter until he had to, but now he gets to determine what she does with her body.

The event is run by a shady character named Pastor Seth (an effective Scott Porter), someone who has a mysterious box in his office, used to punish girls who get out of line. Seth utilizes horrible analogies to make his points, such as the one in which he compares unchaste women to used chewing gum, but casting a charismatic actor like Porter makes him feel even more insidiously awful. It’s easy to see why people fall under Seth’s spell as he preaches what is basically just a form of control to Shay, Jo and friends Kellyann (Annalisa Cochrane) and Lacey (Ciara Bravo). On the first day there, Seth tells the story of Lilith, one that has various forms across religions but is basically used here to tell the tale of a sinful woman who was created with Adam and then replaced by God with Eve and cast away to Hell. Don’t be Lilith, young ladies.

The theme of Lilith as an embodiment of vengeful sinner weaves its way through “Pure” as Shay starts to think she’s literally seeing visions of her after the girls conduct a ceremony, and here’s where Hannah Macpherson’s story loses much of its power. It’s much more harrowing and psychologically devastating to watch the story of Lacey, a young lady so well-played by Bravo that she essentially steals the movie. With Lacey, Bravo and Macpherson take their concept the most emotionally seriously, telling the story of a young woman who wants to believe and fears so badly that she won’t be able to remain pure. That's much more resonant than jump scares of Shay seeing figures in the dark. Honestly, “Pure” would have worked better with no supernatural angle at all, but then we would have been denied the catharsis of a pretty powerful ending when the Purity Ball becomes, well, very unpure. 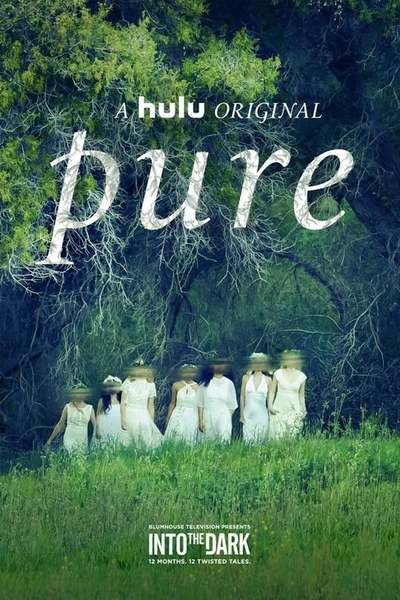