Into the Dark: Midnight Kiss

The second year of “Into the Dark” has been notably more ambitious than the first. Apparently, Hulu has given the production a higher budget, and Blumhouse appears to be encouraging some interesting storytelling. The last two months produced a Pilgrim-centric Thanksgiving original film with a high gore quotient and a fun Christmas installment that played more like black comedy. And now our New Year’s entry comes from a subgenre not often seen on a major streaming service: the gay slasher pic. Sort of like a gay “Big Chill” being invaded by a gayer “I Know What You Did Last Summer,” “Midnight Kiss” has some interesting ideas and certainly feels original, but it comes apart a few times, especially in its final scenes and the tonally jarring jumps between what often feels like a celebration and vicious violence. The cast is also a bit weaker than recent installments, although credit to both Blumhouse and Hulu for continuing to surprise 16 original films into their series.

Of course, the holiday du jour for film #16 is New Year’s Eve, which has brought together a group of gay friends and their one straight female friend (which the official synopsis refers to as a “fruit fly,” teaching me my final new slang for 2019). They reunite with some news—one of them is engaged, for example—but also bring a bit of baggage to the desert retreat they’re going to use as a home base for holiday revelry. The group used to play a game called “Midnight Kiss,” wherein each member tried to find someone new and special on New Year’s Eve for that magical kind of kiss we only see in the movies. The film technically opens in 2013 during a NYE bash, so we know something happened related to the kiss that night, which will surface as 2019 turns to 2020.

And surface with a vengeance. Before the group has even reunited fully, one of them has been murdered in his shower, watching his masked killer throw glitter on him as he bleeds to death. Moments like this, or another in which a champagne bottle is literally shoved down someone’s throat, clearly reach for a camp quotient that’s too often lacking from the rest of the film. The murders are vicious, but they’re relatively infrequent for the slasher genre, and our main protagonists don’t even know there’s a threat until after the hour mark.

Most of “Midnight Kiss” is actually a gay life crisis dramedy. As often happens when old friends get together, some personality conflicts arise, hidden resentments simmer to the surface, and there are some interesting discussions about modern gay culture in general (using apps to hook-ups vs. not doing so, for example). These scenes have more character resonance than we usually get from “Into the Dark,” especially lately, as a lot of them are based on gimmick more than character. And there’s something funny about a slasher film in which pretty much everyone has had sex with one another. One of them even says they created the “Midnight Kiss” game so “We wouldn’t be incestuous anymore.” It’s a group of friends who arguably knows each other too well. Has one of them decided to end it all?

Horror fans may be hoping for more “Scream” and less “Queer as Folk,” as “Midnight Kiss” is really more of a gay dramedy that then gets insanely violent for bursts, at least until the final act when it becomes more of a traditional slasher flick. But there’s a clunky nature to the direction and performances as the night gets longer and bloodier. Director Carter Smith (“The Ruins”) can’t quite find the tone—a movie that opens with a glitter-throwing sociopath needs to be way campier from beginning to end than “Midnight Kiss.” Still, it’s nice to see “Into the Dark” end 2019 with something that feels ambitious and different. Despite the many ups and downs of this series, I’m actually kind of looking forward to 2020. 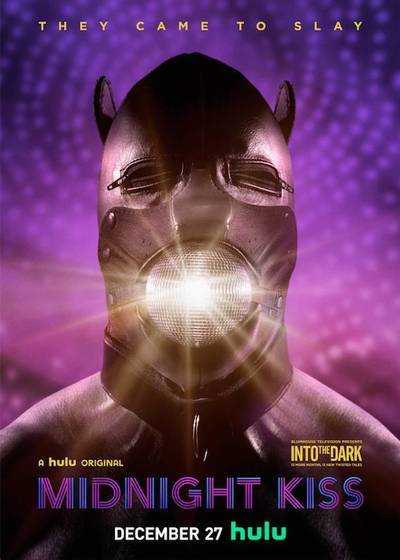