Into the Dark: Flesh & Blood

The second installment of the new monthly film series of Blumhouse Productions known as “Into the Dark” falls victim to many of the same problems as the first, “The Body.” Most notably, like the first movie, it can’t maintain the necessary tension for a feature length running time. It would have made a really solid episode of “Tales From the Crypt,” but simply tears apart when stretched to 93 minutes. One of the problems with streaming service television has been that the tendency, when released from the restrictions of commercial TV runtimes, to go in the other direction, expanding ideas that might have worked at 22 or 44 minutes to much longer than they need to be. “Flesh and Blood” isn’t as grating or frustrating as “The Body,” and contains one strong performance that nearly justifies its slack first half, but we’ll have to wait for Christmas to possibly get the first one of these that’s legitimately good.

Kimberley (Diana Silvers) has severe agoraphobia. We know this because she talks about it with her father and therapist, and also because when she goes outside to get a package, she has a full-blown panic attack. Director Patrick Lussier (“My Bloody Valentine”) employs the kind of cheap filmmaking tics you’d expect to relay his protagonist’s fear of the outside world: unfocused imagery, loud noises, and shaky cam. The point is that she can’t leave the house—this will become important later. The action of “Flesh & Blood” takes place near Thanksgiving, but this really feels like an afterthought that was inserted at the last minute to tie in with the concept of “Into the Dark”—each film will center on the major holiday within the month its released. I’m highly anticipating the mortal fear of Arbor Day.

Our heroine’s only daily contact outside of her regular therapy visits is with her father Henry, played well by Dermot Mulroney. Henry seems like a loving dad, even if his behavior is a little suspicious right from the very beginning. First, he’s always remodeling the house—always the sign of a psychopath in horror movies as it allows for a lot of supplies and mess to be explainable. Second, he’s always leaving the house at odd times, and wearing gloves when it’s not that cold outside. Did I mention that Kimberley’s mother was found dead in a vacant lot almost a year ago? As the anniversary of that unsolved murder arrives, Kimberley starts to convince herself that dad had something to do with it, and possibly is even involved with the disappearance of other local girls. It doesn’t help that the new necklace Henry gives his daughter for her birthday looks a lot like the one around the neck of a missing girl in a news story.

Is dad a serial killer? Or is Kimberley’s mental illness deteriorating to the point that it now includes paranoid delusions? Lussier and writer Louis Ackerman work best when they keep those questions unanswered. Mulroney has a few fantastic beats in the middle of the film in which he deftly portrays the blurry line between frustrated father and flat-out lunatic. Is he mad that his daughter is descending into delusion or that she’s getting closer to the truth? The mid-section of “Flesh & Blood” is the best part of “Into the Dark” so far, but Lussier can’t feign interest in the build-up to it and then blows the tension in the final act. You can feel the length of the piece working against everyone involved, and very easily envision a 30-minute version of the same story. And so as “Flesh & Blood” becomes more predictable, the filmmaking doesn’t tighten like it needs to in order to go from mystery to thriller. It just sags and dries out like, well, an overcooked turkey. 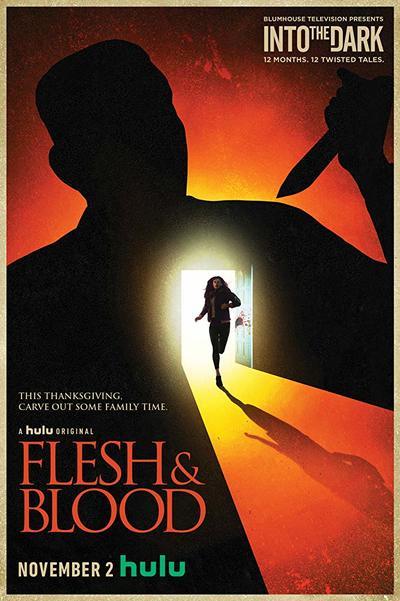