Into the Dark: Crawlers

Nothing is scarier than drunk idiots. If you’ve ever been caught up in a holiday-themed pub crawl like takes place near Christmas and St. Patrick’s Day, you know how downright terrifying it can be. This truth is one of the foundations of the latest chapter of Hulu’s series of original horror films, “Into the Dark: Crawlers,” which has an ‘80s vibe but modern things to say about gender roles and believing women. Like a lot of these films, the ideas are often better than the execution, but this one works more than most, anchored by its clever concept and the young performers committed to pulling it off. After all, if aliens took over the drunken morons that turn bars into amateur night on St. Patrick’s Day, how long would it take you to notice?

“Crawlers” basically blends “Invasion of the Body Snatchers” horror with the story of a group of young people on St. Patrick’s Day navigating the social and physical pitfalls of an epic pub crawl. Shauna (the fun Giorgia Whigham), a girl who thinks she’s smarter than everyone in town (and she might be right), narrates “Crawlers” from a storytelling device that the film didn’t really need: what looks like a YouTube channel or vlog about that “one crazy night.” Whigham does the most with the structure, but Shauna doesn’t need to be stopping this story to over-explain it every now and then. It almost feels like a producer’s note that should have been dismissed.

The heart of the story belongs to Misty (Pepi Sonuga), a girl who recently went through something traumatic at a frat house and feels like she has been ignored by her best friend Chloe (Jude Demorest), who may be about to go off with one of those horrible dude bros, a guy named Aaron. (There’s a definite undercurrent of “Believe All Women” in “Crawlers,” whether they’re telling you about what happened at a frat party or that aliens are taking over your town.) When Chloe literally disappears, and Aaron was the last person she was seen with, Misty heads out to find her, trailed by a new girl named Yuejin (Olivia Liang).

“Crawlers” effectively balances its characters with a campier approach to horror that reminded me of ‘80s cult classics like “Night of the Comet,” which feels like a definite influence here. And the young cast helps elevate material that doesn’t rely too heavily on its gender-issue subtext but also doesn’t ignore it. Several of these “Into the Dark” movies have been imbalanced in that regard, leaning too hard into their high concepts and forgetting to be entertaining, or feeling hollow with nothing to say. I liked the balance of the two here, the story of female friendship with the action of a horror movie about the end of the world.

Like too much of “Into the Dark,” I wish the filmmaking was more ambitious, but I was certainly never bored, which I can’t say for more than half of these original films. There’s something to be said for a streaming horror movie that gets in, entertains you for 80 minutes or so, and gets out. There’s a version of this story that’s a little smarter and a little darker, but “Crawlers” works as a fun diversion that feels both timely and like a loving throwback. And if it reminds people to stay at home on St. Patrick’s Day, that’s a public good. 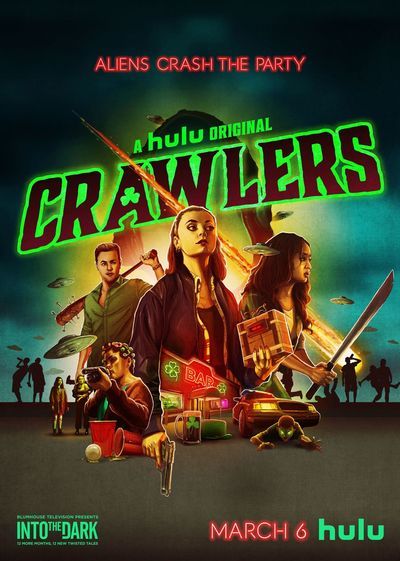