Before my screening of “Instant Family” this week, the film’s director, Sean Anders, showed up on the big screen with a prerecorded statement. He explained to the audience that the movie they were about to watch was based on a true story—his true story. Anders and his wife adopted three children out of the foster care system and were met with untold challenges in the process, inspiring him to adapt their experiences for a big-budget studio comedy starring Mark Wahlberg.

Like the director’s statement, “Instant Family” is a movie with good intentions but is uneven in tone, leaving me with mixed feelings. It felt like the speech was preempting any criticism with sentimentality. The uneasiness continued in the film’s wild swings between tragedy and goofy comedy.

Pete (Wahlberg) and Ellie (Rose Byrne) are a relatively nondescript couple who flip homes and live fairly tame, childless middle-class lives. After an argument with Ellie’s sister, the pair begins thinking about having children. Worried about their age, they decide to foster in the hopes of adopting an older child. By chance, they end up interested in the case of Lizzy (Isabela Moner), a sharp-but-troubled teenager. The couple learns that Lizzy comes with two younger siblings, a sensitive boy named Juan (Gustavo Quiroz) and the tantrum-prone Lita (Julianna Gamiz), and decides to take all three home. After an all-too-brief honeymoon period, chaos starts to break out as first-time parents stumble through caring for a traumatized teenager and two scared children.

The premise of “Instant Family” is not an easy one to make light of, especially since Anders, who also co-wrote the movie, includes some serious doses of reality in the mix. The children in the foster care system may have been abused or struggling to cope with losing their parents, and the movie is refreshingly honest about those issues. However, sometimes that sincerity feels undermined in scenes like the support group sessions. There’s a moment when Pete and Ellie share how great their new foster kids are and the group laughs because the new family is in their honeymoon period, but it’s a stilted kind of laugh and feels more awkward and somewhat mean. That reaction feels staged in comparison to the relaxed bon mots thrown by Tig Notaro and Octavia Spencer, both of whom single-handedly save those scenes with their timing and delivery.

While Wahlberg and Byrne’s characters feel somewhat underwritten, Moner’s divisive character becomes the true leader of “Instant Family.” Moner’s performance is surprisingly uncanny, bringing to life a volatile personality without overacting. She could smile while delivering a ruthless insult, hurt Ellie with the smallest of gestures or fix her eyes coldly on any authority figure daring to parent her. Moner relates those defensive actions to Lizzy’s vulnerability, and she’s equally capable of crumpling into a sobbing mess or laughing with her siblings.

Anders, whose previous credits include “Daddy’s Home” and “That’s My Boy,” has tried to explore the funny side of fatherhood before. While the sincerity in “Instant Family” may not always work well with the film’s demand for punchlines, it gives a young actress like Moner a chance to show some range. Plus, with a supporting cast that includes Notaro, Spencer, Margo Martindale and Joan Cusack, there are just enough oddly sweet performances to get a good laugh. "Instant Family" isn't too schmalzy as a feel-good family movie, and it has a certain charm in its earnest appeal to tell a different story. 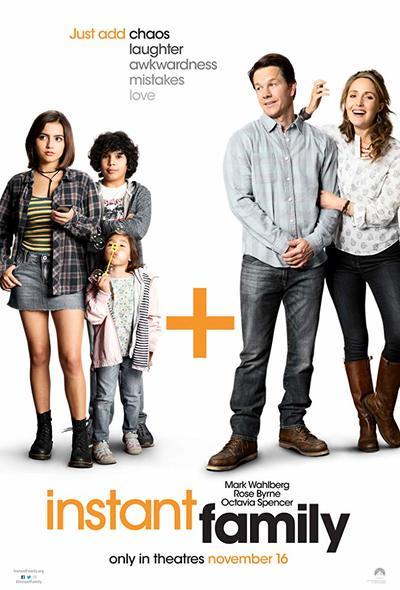