There's a lot going for "Infidel" and there's quite a bit against it. The movie wants to be two different things. The first half has very little resemblance to the second half. Written and directed by Cyrus Nowrasteh, "Infidel" is the story of an American kidnapped by Hezbollah during an interfaith conference held in Cairo. The American ends up in a notorious Tehran prison, filled with political prisoners. He is given a death sentence, based on the trumped-up charge that he's a spy for the CIA. Supposedly "inspired by true events," "Infidel" was executive produced by Dinesh D'Souza, who helmed the propaganda films "Hillary’s America: The Secret History of the Democratic Party" and "Death of a Nation: Can We Save America a Second Time?". Because of D'Souza's presence, one might think the agenda of "Infidel"—and there is one—would be front and center to a tiresome degree. But that's not the case. Agenda-driven films make for dreary viewing and "Infidel" is never dreary. Aided by excellent performances across the board by its international cast, "Infidel" works best when it's an old-fashioned thriller.

This film marks the second collaboration between Nowrasteh and Jim Caviezel, the first being 2009's effective "The Stoning of Soraya M.," with Oscar-nominated Shohreh Aghdashloo tremendous in the role of an avenging aunt determined to save her niece from being stoned. Caviezel is most well-known for portraying Jesus in Mel Gibson's "The Passion of the Christ," as well as the series "Person of Interest." I have so much affection for the 2000 film "Frequency," where Caviezel plays an emotionally damaged man who connects with his dead father (Dennis Quaid) over a ham radio. He's a wonderful actor, and mostly chooses projects where he can express his Christian faith. In "Infidel," he plays Doug, a well-known Christian blogger, who causes an international incident when he proselytizes to a Muslim audience during his appearance on a Cairo talk show: "Jesus is God, and he wants to be your God." Later that night, thugs abduct Doug from his hotel room, whisk him away to Lebanon for months of torture, before transporting him to Iran. Doug's wife (Claudia Karvan) works for the United States State Department, and does her damnedest—pulling every string possible—to get him out.

The faith aspect of this is foregrounded to some degree, but not as much as you might think. Nowrasteh does not make the mistake of presenting Doug as a saintly martyr. He's not even particularly brave. He lies in his prison cell, begging to be allowed to go home. Other viewpoints are allowed space. His frustrated wife, who does not share his faith, watches the Cairo interview on television back in America, and says, exasperated, "What are you doing, Doug?" Later in a telephone conversation, she says to him, "You're preachy. It weirds people out." The faith conversation here is presented in a very human scale, a relatable and real-life scale. Caviezel and Karvan, who worked together before in "Long Weekend," have very good onscreen chemistry. Even though they only have a couple of scenes together, it's enough to establish the relationship dynamic. (Karvan, in particular, is fantastic.)

Doug's lead captor is Ramzi, played by Turkish Cypriot-born British actor Hal Ozsan. Ozsan brings a sense of insouciance and almost playfulness to his interrogations of Doug, making him an extremely unpredictable and sometimes frightening figure. He tries to reason with Doug: "Just tell them what they want to hear and this will all be over." His British accent destabilizes him from a specific region, and he tells Doug of his radicalization due to the brutal treatment he received in the United States. But Ramzi is no sneering stereotypical "Middle Eastern" villain. He comes from a very authentic place of anger and grievance, and isn't particularly devout. Religion doesn't come into his reasoning at all. He's a practical man of the world. It's a nice touch. He's not drawn in broad brush strokes. Like everyone in "Infidel," he is human-sized.

It is Doug's wife's quest to get her husband out of Iran that makes up its thriller-movie second half. The ideological and theological questions posed by the first half are mainly tossed out of the window, although vestiges of it remain. In Tehran, she is taken in by a group of persecuted Christians, who hold services in secret in someone's home. They heard of her plight and want to help. Among their ranks are prison guards who pass messages to prisoners, flouting authorities. An added layer of complexity is that the prison guards are not Christian, but Muslims who oppose the Iranian regime. The tiresome binary of "Muslims bad, Christians good" is undercut by this inter-faith opposition team. There are a couple of jarring digs at "secularists" being the real enemy, and you can practically see Dinesh D'Souza's face peeking out from beneath the screen in these moments.

Nowrasteh handles the action sequences confidently and there are many legitimately gripping moments. The best moments for me were the small ones, the intimate ones. Caviezel is often a very solemn figure onscreen, and here, Karvan makes him laugh. She forces him to not take himself too seriously. Doug is a believer but he's not self-righteous. He even admits it was stupid to try to preach to the camera on Cairo TV. At one point, Ramzi says to Doug, wryly, "We take this shit far too seriously, mate."

It's something to consider. 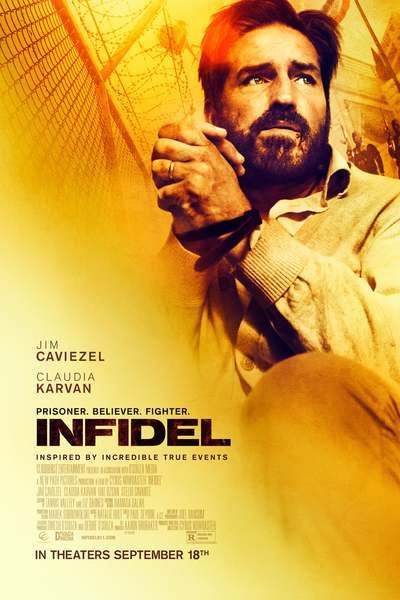