“I'm No Longer Here” (“Ya no estoy aqui”) is one of those Netflix movies you’ll wish you’d watched on the big screen. The film from Mexico City-born writer/director Fernando Frias de le Parra is so gorgeously shot and offers such a rich sense of place that it’s always visually compelling, even when the narrative tends to sag a bit.

The filmmaker, who directed all six episodes of the HBO Spanish-language, horror-comedy series “Los Espookys,” turns his attention to another genre mashup. "I'm No Longer Here" focuses on modern teenagers in the northern Mexico city of Monterrey who are obsessed with the bouncing beat of traditional cumbia music, slowed-down and done their own way. They call their crew the Terkos, go by nicknames like Chaparra and Sweatshirt, and spend their days wandering the streets, singing, dancing, and talking trash about the other groups in town.

Frias, working with cinematographer Damian Garcia, follows the non-actors playing these characters in long takes as they roam narrow, graffiti-strewn alleys and climb around the beautiful decay of abandoned construction sites. They allow us to revel in the teens’ signature style as they move to the beat—their baggy, brightly-hued street gear and their haircuts which are spiky on top and long in the front with dipped blonde tips. And when they dance, it’s a cool and specific mix of the ancient and the timeless: The guys prance like roosters while the girls playfully shake their butts. It’s a primal mating dance but it’s also refreshing and alive.

"I'm No Longer Here" offers a vivid and vibrant slice of life—it’s a hangout movie about asserting your own identity but also wanting to belong. The days are joyously lazy, and yet a creeping sense of danger emerges as they interact more with a charismatic cartel member and his minions. In the middle of this tension is the Terkos’ leader, 17-year-old Ulises, played by a confident Juan Daniel Garcia Treviño. And as his name would suggest, he goes on an odyssey, one that we see in back-and-forth flashes in time.

At the film’s start, he’s saying goodbye to his friends in a daze before being driven away. Soon, Ulises ends up in an ethnically mixed section of Queens, New York, doing day laborer work in the shadow of planes landing at LaGuardia Airport. As comfortable and connected as he was in his neighborhood back home, he’s lonely and isolated in the United States. He doesn’t speak any English but even the Spanish speakers he works and lives with ridicule him for his looks, his accent, and especially his taste in music, which is crucial to his sense of self. Frias captures the surreal sensation of feeling utterly alone despite constantly being around people as Ulises struggles to find his way in a foreign land.

But he strikes up an unexpected friendship with Lin (Angelina Chen), the pretty and inquisitive 16-year-old granddaughter of the convenience store owner for whom he does odd jobs. The scenes in which she tries to speak with him in halting Spanish, even going so far as to communicate with him through Google translate while sitting next to him at a library computer, have an understated sweetness about them. It makes you wish the relationship could develop into something more substantial, and not necessarily in the romantic sense.

Frias’ script bounces back and forth between Ulises’ daily grind in the States and the events that forced him to flee his home. When Ulises gets mixed up in gang violence, Frias holds the shot and lingers amid the blood and carnage similar to his treatment of the happiness and energy of the dance sequences. The Queens section isn’t quite so arresting and it meanders a bit as Ulises wanders the city; still, traveling there gets him out of his comfort zone and forces him to meet people of different cultures and experiences than he would have in his insular hometown, where he was essentially a rock star.

He undergoes major, life-changing events, but "I'm No Longer Here" is at its most effective in the small moments and details: the flash of gold metallic wallpaper in a tacky apartment hallway, a red bandana tied around the forehead just so and the quick thrill of a radio shoutout. All of which, stitched together, form the tapestry of a young life in flux. 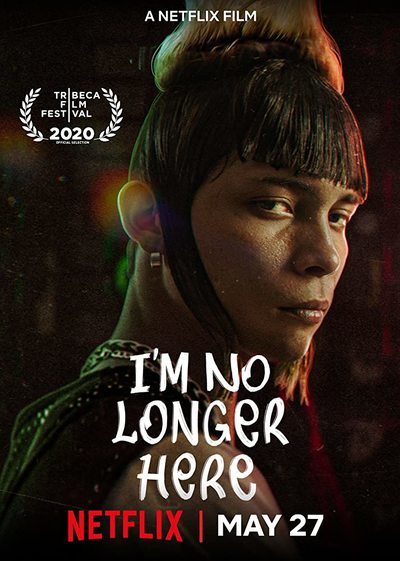