I'll Be Gone in the Dark

Director Liz Garbus was faced with a big challenge when hired to adapt Michelle McNamara’s I’ll Be Gone in the Dark into a six-part docuseries. It has to tell the true crime story of the Golden State Killer, a monster of a human being once known as the East Area Rapist and Original Night Stalker (and even the clunky acronym EARONS for a time) who remained uncaught for decades. But it is also very much the story of McNamara herself, a wickedly talented writer who became obsessed with this case, first writing an acclaimed feature story about it and then almost finishing a book about it before suddenly passing away. With the help of her team and her husband Patton Oswalt, the book was finished and glowingly reviewed, leading to the capture of The Golden State Killer.

How Garbus balances these intersecting narratives—the victims, the author, the world of true crime—is what elevates “I’ll Be Gone in the Dark,” a series that keeps its human core in a way that true crime offerings often don’t. McNamara’s writing was so widely acclaimed because she revealed as much about herself as the case she profiled, commenting on how much this man had impacted her life. So much true crime writing and TV turns victims into numbers, often telling us more about the background of the criminal than those he destroyed. This is a project that’s constantly centering the people that matter—the victims and the person who became obsessed with telling their stories.

“I’ll Be Gone in the Dark” opens a window into a world of true crime obsessives, the people who spend long nights poring over theories on message boards, sharing their own takes on famous crimes, or listening to podcasts like the great “My Favorite Murder” (co-host Karen Kilgariff is included as an interview subject). McNamara became a part of this world and started her own blog, True Crime Diary in 2006, in part fueled by her fascination with the case of Kathy Lombardo, an unsolved murder that happened near her home in Oak Park, Illinois. Before long, McNamara came upon the case of the East Area Rapist, a monster who tormented victims in the Sacramento area in the ‘70s but had none of the national attention of someone like the Zodiac Killer. She wanted to know why. After his crimes were tied to the murders committed by a serial killer known as the Original Night Stalker, McNamara became even more invested in the case, developing theories and even forming a trust with the investigators and victims.

In 2013, McNamara published an article about what she had dubbed The Golden State Killer in Los Angeles Magazine to raves, and an almost instant book deal. For the next few years, she worked on that book, coming closer to solving the case herself as she also started a family with Oswalt and daughter Alice. “I’ll Be Gone in the Dark” never loses sight of McNamara as a person. Friends and family, including Oswalt, are interviewed extensively and ensure that this remains her story. She died suddenly in 2016 and Oswalt and others helped finish the book. The series avoids judgment about the stories that McNamara died of substance abuse but does suggest that her stress level regarding the case and book led her to mix prescription drugs in an unhealthy manner. It’s a reminder that everyone should keep a close eye on not only what they’re taking but what their loved ones ingest under medical guidance. No one thought McNamara would die.

Garbus knows that this isn’t just a biopic of a talent lost too soon. Early on, it’s made clear that McNamara was a deeply empathetic person, concerned about victims in a way that dispels that myth that true crime fans are ghoulish. And Garbus very clearly tries to mimic this humanist approach with her direction. Large sections of “I’ll Be Gone in the Dark” are devoted to victims of the Golden State Killer bravely telling their stories of terror, assault, and rape. But it never feels exploitative. It’s a series about a community that forms around events like the various crime sprees of the Golden State Killer. Near the end, victims of the monster come together with fans of McNamara & Oswalt at an event for the book, and I was struck by how communities can form through trauma.

I watch a lot of true crime series and read a lot of true crime books. In another life, I could see myself becoming like McNamara, obsessing over a single case and working myself too hard to present it to the public. What separates “I’ll Be Gone in the Dark,” the book and series, is the warmth and humanity embedded in every aspect of it. This is a series about a man who tried to destroy those things—to take humanity and peace away from people—and yet it feels empowering and even warm in the end. None of us, even the victims, are truly alone in the dark. 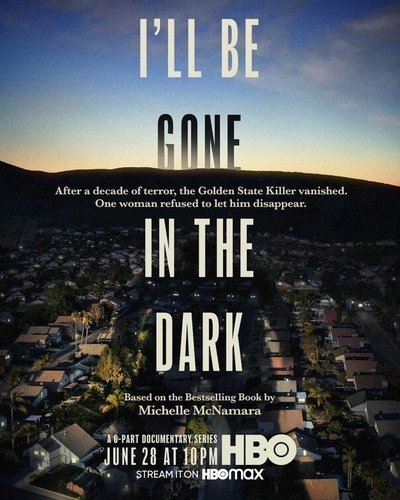