I Touched All Your Stuff

"I'm not one of those angry, jealous guys," the man says he told another man over the phone, while trying to gather some information about his girlfriend. Of course, this man—the one who claims he's neither the angry nor jealous sort of boyfriend—found out that this other man knew his girlfriend after contacting one of the girlfriend's ex-boyfriends. He was able to get the ex-boyfriend's contact information after he rigged his own computer with a program that would record a user's keystrokes. From there, he was also able to obtain her email password, which he used to find out with whom the girlfriend was communicating online.

In other words, Christopher Kirk, despite his protestations, certainly sounds like the jealous type. He covers it up with a smile and an aw-shucks sort of body language while he tells this part of the story, but the way he tells this story is much different than what we hear him say and what we learn he has omitted.

Here's the strange thing: "I Touched All Your Stuff" isn't actually about Kirk's experiences with this particular girlfriend. Well, it is to a degree, because that's the story Kirk wants to tell, much to the chagrin of one of the documentary's co-directors. She bemoans that Kirk is the lead actor in the story of his life, yet he seems almost completely absent from his own narrative as he tells it.

The story that directors Maíra Bühler and Matias Mariani want to tell has been hijacked by their central character, who doesn't want to tell that particular tale. One really can't blame them for being misdirected. Kirk weaves a beguiling yarn—about misadventures involving the wrong woman, about misplaced love, about the mystery of the behavior of this enigmatic woman, whom he only calls "V."

He's charming as he tells it, yet there's something else there. We catch a few moments when his eyes and his mood, which is typically jovial or patient, seem to darken. Perhaps that's just the bias of seeing him in a tiny room inside a Brazilian prison where he's serving time talking. This man has a secret, and Bühler and Mariani desperately want to get to it.

The way they go about trying to find that secret is the movie's most novel conceit. At one point, Kirk directs the filmmakers to find his old computer. Everything they want to know about his time with "V" is on the hard drive. The directors provide interviews with Kirk and an assortment of his friends (from Olympia, Wash., where he resided) and family (from his hometown in Michigan), who all say what a charming but naïve and gullible but genuinely nice guy they knew him to be. Bühler and Mariani also present their investigation of that computer.

The screen is filled with the contents of the monitor as they peruse files. There are photographs and videos of his travels to Colombia, where Kirk met "V" after traveling there to see drug kingpin Pablo Escobar's hippos, and Los Angeles, where "V" spent a good deal of time with an older Mexican gentleman. The soundtrack is made up of songs they find in the music directory. There are logs of his online communications with "V" and some of the other men she knew. For some reason, there's a single text file, which has Iago's immortal metaphor describing jealousy as a "green-eyed monster." Surely that's a clue as to what landed Kirk in prison or, at least, the kind of person he really is, despite the persona he presents to the filmmakers.

There's a riveting sensation of sleuthing to these sections of the movie, as we attempt to piece together not only the mystery of "V" but also what significance this story has to Kirk's current status as an inmate at a prison in São Paulo. Kirk isn't talking, and that only makes the whole thing more enthralling, particularly when the directors juxtapose his version of tracking down those other men with his angry, jealous correspondences.

It makes sense that Kirk would muddy the heart of the matter to inflate his importance, especially when we learn the truth about his incarceration (It's a big deal, but it's just not as big as the movie seems to be leading us to believe). The man made national news, but it had nothing to do with his crime—just an elaborate prank a friend pulled on him.

The problem is that there's really no excuse for the way Bühler and Mariani obscure our perception of this man and the very reason they want to talk to him in the first place, save for the fact that it provides this complicated but ultimately shallow narrative with a hook. Why is Kirk in prison? The answer is a web search away—one the filmmakers leave for an anticlimactic, third-act revelation.

The reveal tells us little, except that everything we've heard from Kirk is unimportant (except, maybe, his interest in those hippos, which might have more to do with their former owner than the beasts themselves). One gets the sense that the filmmakers feel slighted by their subject, and "I Touched All Your Stuff" is an attempt to make us feel that sting of disappointment. In a way, it's effective. The movie is disappointing. 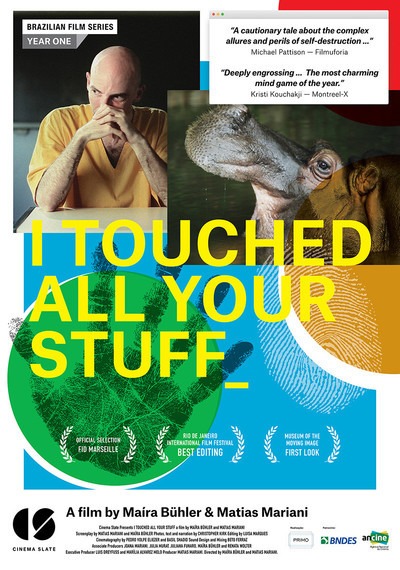