For its initial 40 plodding minutes, the clumsy thriller “I See You” works very hard to get your attention. A boy, riding his bike through the woods, is yanked into thin air as if he had reached the end of a bungie cord. He soon joins the roster of other missing kids in a small town, where Detective Greg Harper (Jon Tenney) is trying to piece clues together (like a green Swiss Army knife) before there are more disappearances.

On a smaller scale, something even more scandalous is afoot—his wife Jackie (Helen Hunt) has recently cheated on him, which comes up in numerous terse exchanges that she has with Greg or their moody teenage son, Conor (Judah Lewis). It’s a tense atmosphere, so much that when strange things start to happen they seem like diversions, like when Greg gets locked in a closet chasing the family hamster, or the silverware vanishes from the kitchen drawers. But as loud and in-your-face as these developments are presented, they amount to a shabby collection of Blumhouse-lite scenes that would be a parody if it weren’t so dull.

This is the work of director Adam Randall, who is more of a poor salesman with this script from Devon Graye than an inventive storyteller. Randall has a comical bounty of drone shots that swoop around locations and sometimes look they’re going to crash into the Harper house; Philipp Blaubach's score emphasizes the importance of every one of the script’s ominous visuals, and sounds like a steel mill in space. "I See You" loves to use these components to tease that a supernatural force might be lurking in the shadows, and then abruptly cut—like it does right before wielding its title card. But it doesn’t build promise that Something Scary is happening, so much as pile on a very tedious atmosphere.

"I See You," has a shaky dramatic foundation too, as Graye's script isn’t interested in exploring the affair, so much as using it for blunt conflict between the mother, father, and son. Dialogue doesn’t help give it any nuance, nor do the performances, which are stuck in one-dimensional portrayals of anger or shame. Hunt’s talents are ultimately not applied to this movie’s elements of horror, but instead its undeveloped aggressions on how infidelity could destroy a home.

This all turns out to be fairly false advertising, and  “I See You” does a disservice to itself by not revealing until midway through what kind of movie it actually is. So I have little problem in clearing up that this is a home invasion story, instead of a supernatural tale. The movie then retraces its bumps in the night from a different perspective, that of two grimy teens, Mindy (Libe Barer) and the much more chaotic Alec (Owen Teague). They dabble in an illegal activity known as "phrogging," which is a real term for when criminals stay in a stranger's home, uninvited, unnoticed. Their POV is first shown through footage they’ve captured on camera, running into the Harper's upper-middle class home one morning before the garage door closes. A little creepiness settles in, as it harps on the concept of your space being invaded, by people who are just out of your peripherals. It’s a disturbing idea, and also one of the film's few good ones.

But even this method of bringing an initially dreamy horror back to your most private spaces becomes clunky and weak, with developments that I won’t spoil. As the mode of "I See You" changes so does the identity of its central monster, but the reveal comes from a heavily manipulated change in POV. Tying everything together with backstory revealed in the last few shots feels gratifying as someone who had to trudge through the first half, but it's not fulfilling on the story’s aimed terms to be unsettling and tricky. It would be impossible to guess the ending of “I See You” during its tiresome first act, which is something numerous films can’t tout, but the movie uses cheap tricks to earn that kudos. 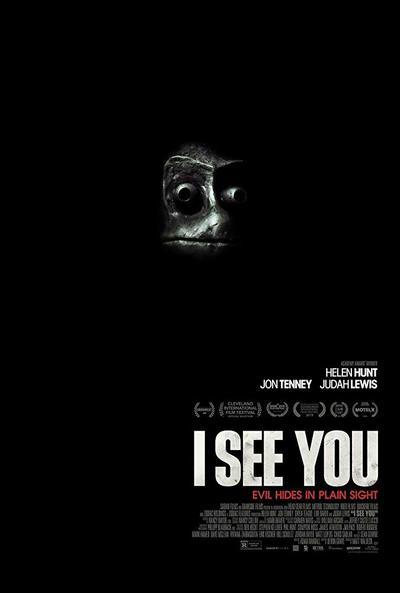