I Lost My Body

Jérémy Clapin’s “I Lost My Body,” a surprise winner of the Critics’ Week Grand Prize this year at Cannes (the first animated movie to do so), is a visually sumptuous slice of macabre storytelling that works best when it uses its director’s magical sense of composition and less when it feels weighed down by narrative. There are some passages that are as unforgettable as any film this year, animated or otherwise. It often feels like a dream, or at least something caught between waking and sleep. When it loses that sheen and focuses on a relatively creepy story of a young man who basically stalks a woman that he hopes likes him, the tonal balance falls. Luckily, there’s enough of the former to warrant a look. It’s certainly like nothing else you’ll see this year.

“I Lost My Body” is the story of a severed hand. Yes, like something out of a black-and-white B-movie you saw late at night on network TV, “I Lost My Body” opens with a severed hand pushing its way out of a medical refrigerator, finding a way to rip open the bag that holds it, and then beginning a long journey across the Parisian night. Don’t worry—this is not an animated movie in which the hand sings and dances. It just crawls, like a variation on Thing from “The Addams Family.” But it has undeniable, and almost inspirational purpose. The hand will face all kinds of threats across the city, from an amazing scene with rats under a subway train to speeding traffic, but it never gives up its drive. We don’t know what that drive is. We just know it’s headed somewhere. These scenes are wonderful, almost entirely free of dialogue, buoyed by a great score by Dan Levy. I could have watched that hand for hours.

I was much less interested in the story of a pizza delivery boy named Naoufel (Hakim Faris) and his interest in a young lady named Gabrielle (Victoire Du Bois). After poorly delivering her pizza one night, he finds a way to get closer to her, leading to a relatively traditional love story in which the guy is much creepier than he probably thinks. Some of that can be explained away by Naoufel’s existence. He lives with his brother and uncle, and there are hints of tragedy in his past which will become clear in the film’s final act. I became invested in Naoufel finding happiness, but never cared about the love story. There’s a stronger version that either strengthens it or discards it entirely, but it feels half-done here.

Much stronger is the way that Clapin and co-writer Guillaume Laurant, a regular collaborator with Jean-Pierre Jeunet (“Amelie”) and author of the book on which this is based, keep returning to hand imagery, even outside of the actual appendage crawling across the French landscape. We get snippets of flashbacks to Naoufel’s childhood, and it’s often centered on something like a hand in the sand or feeling the breeze outside of a window. There’s a tactile nature to the storytelling here that ties the two halves together before the dots are connected in the final act and we learn who that hand belongs to and where it’s been going all along.

Like a hand without a body in a dark room, “I Lost My Body” snuck up on me. I found it whimsical and magical at times, leaden at others, but there’s a power to the final ten minutes or so that really works. Without spoiling anything, you realize this isn’t so much a love story as a story of how we go on after tragedy. Don’t be surprised if you see yourself in that creepy hand, pushing forward through conflict, feeling your way in the dark. 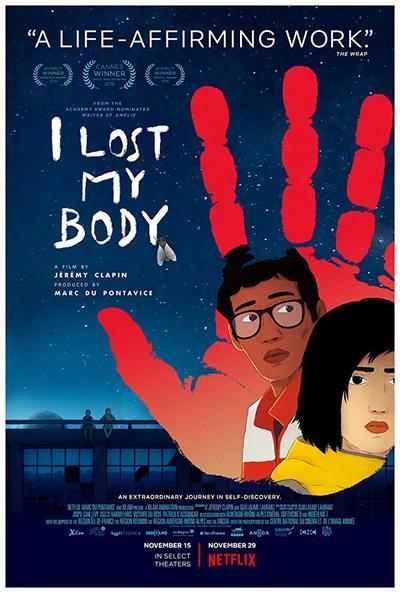