"You are my dream. But you arrived a little too soon."

The bittersweet ache of this line, said in voiceover in "I Carry You with Me," carries with it the weight of the circumstances beneath the love story depicted, where love is unable to grow naturally, where love arrives unexpectedly in an unwelcoming world, where love cannot express itself for a variety of cultural and/or political reasons. Timing is everything, they say. What if your perfect person arrives too soon, before you are ready, before the world is ready? Ten years later, the soil might be more welcoming, but by then everything else has changed too. This is the complicated atmosphere of "I Carry You with Me," directed by Heidi Ewing, and co-written by Ewing and Alan Page Arriaga.

Based on the real-life love story of Iván Garcia and Gerardo Zabaleta, "I Carry You with Me" dramatizes their relationship, which dates back decades, and then flashes forward to who and where they are now. The film is pure hybrid, flashing backwards and forwards in time, showing the real men in the present day, and using actors to dramatize their love story in the past. Ewing comes from a documentary background, and this is her first narrative feature. Nominated for an Oscar for the 2006 film "Jesus Camp" (co-directed with Rachel Grady), Ewing brings her documentary sensibility to the table here, and her collaborator in this is the uber-talented Mexican cinematographer Juan Pablo Ramírez.

Current-day Iván Garcia is our "way in" to his own story. A well-known chef, living and working in New York City, the film opens with dreamy shots of him riding the subway, before moving back to his earlier days, as a young man in Puebla, Mexico, struggling to get work as a cook. Played by the gifted Armando Espitia, Iván clears tables at a restaurant, hoping for a chance to show his cooking talents. He has a son, and his relationship with the mother is tense. He has no money, no prospects. He also has a secret. A friend takes him to a gay bar in Puebla, where he meets Gerardo (Christian Vazquez), a TA at a local university. Their initial conversation lasts until dawn. There's a connection beyond the physical (but the physical is good too). Gerardo is "out," and Iván is not. He's afraid if he comes out, he will no longer be allowed to see his son. Neither man has the support of their families.

Meanwhile, all along, the dream of America beckons. Iván hears stories about people who have "crossed over," and how much better it is "over there." Maybe he should try it. Maybe it would be the best thing. But how to leave his son? How to leave Gerardo? The timing is terrible. Gerardo arrived too soon.

Much of the movie is shot with a hand-held camera, but there's careful planning in evidence, with insert shots of food, faces, street scenes, shadows, weather. The camera captures not just the characters' interactions, but the texture of their worlds, the rooms they live in, the food they eat, their eloquent gestures and glances, the silences, the sensuous pleasure of skin against skin. It takes a very sensitive eye to not only get footage like this but to combine it all together into a coherent whole. Documentaries lean heavily on such footage, since small details like the knick-knacks on a mantelpiece reveal more about a character than any dialogue they might say. Ewing's tender specific approach elevates the flashbacks out of being dutiful re-enactments. She's also cast the film sensitively and well. Both young actors are vulnerable and intelligent, dealing with extremely complicated and painful issues, while their love for one another is simple and clear. This is no small feat.

What was a love story, albeit a forbidden one, moves into an immigrant story; Iván suffers in New York with the isolation of exile, not just from his home country, but from everyone he loves. When the present-day scenes arrive, we meet the real Iván and the real Gerardo, and there's something very gratifying about seeing them in person, these two men we've gotten to know so well. The hybrid structure of "I Carry You with Me" brings some problems with it, mainly in terms of balance. The dramatizations make up the majority of the film, and the current-day documentary sequences at first feel tacked-on when they arrive.

The result of Iván's "crossing over" has been mostly positive. He is a well-known chef, he owns a restaurant, he has made a name for himself. But there have been devastating consequences in terms of his ability to travel to Mexico to see his family, to see his son. Coming into the United States illegally means he can never go back, even though he has been a valuable and responsible part of his community for two decades. He hasn't seen his son in 20 years. His son is denied a Visa consistently. These policies targeting undocumented immigrants are purposefully cruel and "I Carry You with Me" shows the anguish of such enforced separation from family.

"I Carry You with Me" is a complicated film, in many ways, and it covers a lot of ground, but the emotions portrayed are simple and human-sized. The title, too, takes on additional resonance once the credits roll. Iván is not just carrying Gerardo with him. He's carrying everyone he left behind. 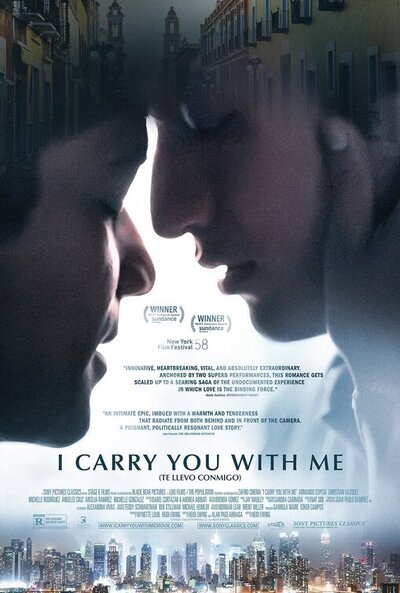