Neil Platt is playing peek-a-boo with his infant son; in the moments his face is exposed, his son has a brief chance to kiss it. But Platt plays the game differently to most parents. His face is not emerging from behind his hands because he cannot lift his hands. His face is emerging from behind his breathing tube, which his wife has disconnected from his nostrils. An alarm sounds. The ventilator has been disconnected for too long. The game is over.

Platt was a 34-year-old Scottish architect. A year before filming for "I Am Breathing" began, he noticed one of his feet slapping on the ground slightly when he walked. He thought this meant he needed new shoes. It meant he was terminally ill.

Platt was soon diagnosed with what in Britain, and therefore in this documentary, is called Motor Neurone Disease but what in America is known as ALS or "Lou Gehrig’s Disease." It is aggressive and incurable. It dismantles the nervous system, gradually preventing the brain from communicating with the muscles in the body.

Over the 73 minutes of "I Am Breathing," we watch a vibrant young man incrementally become a corpse. But this is not a film without hope or comic relief. Platt called the blog he wrote about ALS "a tale of fun and laughs with a smattering of upset and devastation." That is also a decent description of this film. It is not purely a record of Platt's death but also a record of his life. It combines home videos of Platt when he was able-bodied with interviews with him as he sits, increasingly motionless, in a specially constructed armchair. Interspersed between them are readings from his blog, which looks both nostalgically back at his life and unflinchingly forward to his death. And so we follow Platt's story along two timelines: from his birth until his diagnosis, and from his diagnosis until his death.

In its best moments the film demonstrates something best described by F. Scott Fitzgerald: "There [is] no difference between men, in intelligence or race, so profound as the difference between the sick and the well." This uncomfortable idea is never verbalized in "I Am Breathing" but it is repeatedly proven by the juxtaposition of Platt's able-bodied past self with his disabled present self, and by the images of him dying in his chair while his son plays at his feet, giggling and smiling and heartbreakingly oblivious.

The most perfect demonstration of the distance between the healthy and the chronically sick comes in a small scene that directors less intelligent than Emma Davie and Morag McKinnon might have cut from the film. In it, Platt explains to his wife that he wishes he could stand up, walk into their garden and cut two branches from a particular tree. The reason, he says, is that from where he sits the branches poke asymmetrically into the otherwise clear patch of sky he can see through a square window. Even his wife, who knows him so well she can tell what he needs by the subtlest flickers of his face, is baffled by this statement. I suspect able-bodied viewers will be baffled too. It is only those of us who have spent large portions of our lives immobile, staring at the same piece of wallpaper or stretch of skyline, who can understand how irritating those two branches must be.

Though the film is directed by Davie and McKinnon, Platt was the true force behind. He was desperate to document his last days, partly to atone for the guilt he felt at having done too little to raise awareness of ALS in the decade between the disease killing his father, who we learn developed it in his fifties, and it beginning to kill him. Late in the film, Platt's wife and mother rush to assist him as he struggles to breathe. The camera swings away from him, up to ceiling. We wonder if the directors have decided to censor themselves, not to intrude on what may be Platt's last moments.

But the camera has simply been knocked from its stand. Platt calls for it to be turned back onto him before his wife and mother continue to help him breathe. His insistence on being recorded at all times is evidence of something that impresses us throughout "I Am Breathing": not the remarkable strength of Platt’s desire to live but the remarkable strength of his desire to die on his own terms.

In an earlier scene he explains the circumstances under which he wants his ventilator switched off. The final line will be crossed, he says, when he can no longer speak or swallow. It seems almost profane to report that on a site named after Roger Ebert, whose voice became louder after he lost the ability to speak and who responded to being unable to eat by writing an acclaimed cookbook. 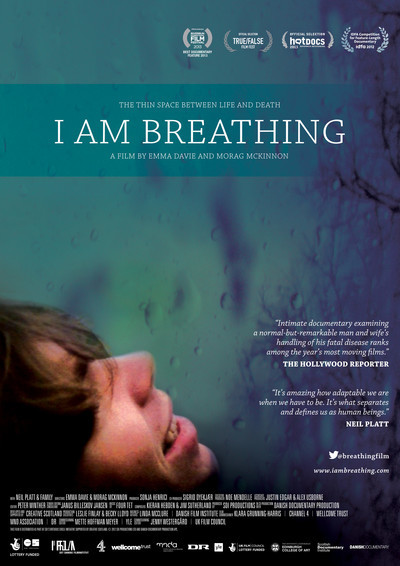 Neil Platt as Himself