When a movie doesn’t quite come together, it’s often tempting to say that something essential is missing. I’m not so sure that that’s true of “Hypochondriac,” a rather good psychodrama about repressed childhood trauma that’s also an underwhelming horror movie about mental illness. Writer/director Addison Heimann’s creepy and often intriguing character study seems to have been made with a clear sense of who its protagonists are and why they behave like they do.

Heimann and his collaborators also seem to know exactly how they want to present Will (Zach Villa), a traumatized potter who’s haunted—and maybe literally stalked—by his paranoid and abusive mother (Marlene Forte). The main thing holding back “Hypochondriac” from being an even better movie is that it’s more convincing for its sketchy details than its prevailing narrative.

In “Hypochondriac,” even someone as hurtful and unbalanced as Will’s unnamed mom is presented with obvious care and unsparing precision. So it’s easy to trust that the movie is, in fact, “based on a real breakdown,” as an introductory on-screen text claims. Will spirals out of control soon after his mother starts blowing up his phone, pleading with him not to trust his good-natured boyfriend Luke (Devon Graye). It’s thankfully hard to tell if these messages are all real or at least partly imaginary. Will struggles to get various doctors to take him seriously, and insists that, despite their test results, there’s something very wrong with his arms. In time, Will starts seeing a man in a wolf costume (Scott Butler) that strongly resembles Frank the rabbit from “Donnie Darko.”

The plot of “Hypochondriac” may not advance beyond a point, but there’s often enough character-revealing details to keep Will’s story moving. Will’s frustrated attempts at self-care are especially compelling. He’s never really alone, though it often seems that way, to the point where it’s easy to see why he assumes that the only way to feel normal is to shut off the outside world. Will has a friendly relationship with his co-worker Sasha (Yumarie Morales), who also suffers from panic attacks, and a solid enough relationship with Luke, who cooks for Will and often asks after his health.

But even Will’s work environment starts to look unsafe once it becomes clear that his passive-aggressive boss Blossom (Madeline Zima) doesn’t really care about him. Luke also doesn’t seem to understand the depth of Will’s discomfort, mostly because Will keeps him at arm’s length. And soon enough, a conspiracy seems to form behind the innocent smiles and calming gestures of physicians like Dr. Jansen (Peter Mensah), Dr. Rosenstein (Adam Busch), and Urgent Care clinician Chaz (Michael Cassidy).

“Hypochondriac” also features a number of finely observed and well-dramatized scenes that help viewers see Forte’s character as more of a destabilizing presence than an out-and-out villain. I’m thinking particularly of a found-footage-type scare scene that includes some ruthlessly edited nanny cam footage. Will also has a couple of brief, but revealing conversations with his dad (Chris Doubek), whose matter-of-fact dickishness says a lot about Will’s anxiety. These scenes make Will’s self-sabotaging behavior seem more sensible and credibly tragic.

Unfortunately, while key parts of “Hypochondriac” vibrate with just-so authenticity, a lot of Will’s narrative also seems under-developed to the point of distraction. Heimann and his collaborators skillfully establish a genuinely creepy ambience, thanks partly to their effective use of overlapping dissolves to represent Will’s subjective panic. But the movie’s dreadful atmosphere is never thick enough to be completely absorbing.

Will’s core relationship with Luke resonates thanks to a few finely observed gestures and dialogue exchanges, but his reluctant bond with Butler’s wolfy friend often feels tacked on and maybe even besides the point. A nightmare-like sex scene only reveals so much since it’s got more to do with Butler’s disturbing presence than, say, Will’s body, or his anxious, but horned-up partner.

Will’s Babadook-like friend also sometimes distracts from his tortured relationship with his mother. Forte’s performance is off-kilter enough to make you wish that “Hypochondriac” were more about Will’s mom and less about Butler’s painfully literal personification of Will’s trauma. Her stilted line delivery brings a fittingly brittle quality to her character that makes you want to know what exactly happened to Will’s mom, and why her presence still looms so large over her adult son’s life. Some of those questions are probably best left unanswered, though a few are abandoned without meaningful consideration since Will’s story is more about his mental instability than his love life, his traumatic past, or his family. Still, while Heimann’s keen understanding of Will is genuinely impressive, “Hypochondriac” is ultimately never so relentless or well-realized to be completely believable.

Now playing in theaters and available on demand and on digital on August 4th. 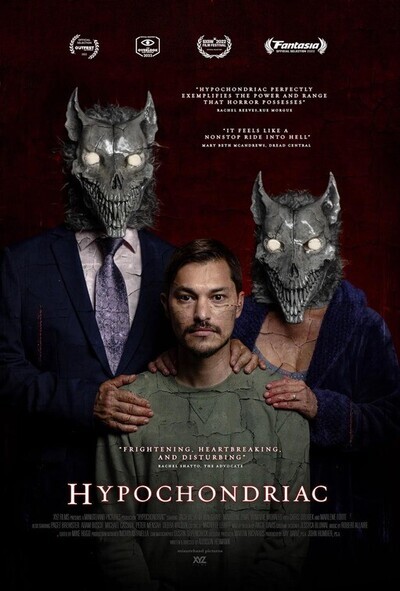 Zach Villa as Will