How to Fix a Drug Scandal

Rarely have I been more frustrated by a documentary production’s formal choices and how they interfere with the engaging content of the story they’re trying to tell than I was during Netflix’s latest true crime docu-series, “How to Fix a Drug Scandal.” There’s a fascinating story here about addiction, corruption, injustice, and poor work practices, but the producers of this four-part series bury it all in camera tricks, flashy recreations, clipped interview soundbites, frustrating structure, and more. It’s a textbook example of my favorite Roger Ebert quote: “It’s not what a movie is about, it’s how it is about it.” The "what" here is fascinating. The "how" made me feel like I needed a stronger prescription.

“How to Fix a Drug Scandal” is primarily the story of Sonja Farak, who was arrested in 2013. Farak worked at crime drug lab in Massachusetts, and it’s safe to say that she got a little too interested in her job. She began testing the product, becoming so addicted to drugs that she would regularly take breaks on the job to smoke crack. How long had this been going on? And how did it impact Farak’s work? How many cases had been incorrectly processed because the person processing them was high? In the wake of a similar drug scandal from the previous year, in which a technician was found to be “dry labbing” (not actually doing the testing but saying she had), the system tried to sweep Farak-gate under the rug. Dozens of people who thought their convictions should at least be reconsidered if not outright overturned were told that this was a small problem, and the justice system tried to make it go away. If not for the diligence of some motivated souls, it may have just disappeared, but the scope and extent of the problems Farak caused were eventually exposed.

Clearly, an interesting story, right? Just the idea that a successful woman would one day start experimenting with meth and crack is fascinating. What leads someone to do that, especially when they start to realize it’s impacting their very important job? And how is the system so broken that it’s even possible much less sustainable for a long period of time? And that interesting story can be balanced with the people trying to deal with the aftermath. How does a system respond when it appears hundreds of closed cases may have to be re-opened?

It’s almost as if all these engaging ways into the Farak story and the people around it were just too much for the producers of “How to Fix a Drug Scandal” to take, and so they lost their focus trying to hit them all. The production can be wildly unfocused, jumping from interviews with Farak’s family that are too chopped up to be truly revealing, to specific stories of people trying to use the Farak case to achieve delayed justice, to actual recreations of footage of her on the stand, which is a decision I’ll never understand. Recreating events in documentaries is artistically dangerous enough, but this story definitely didn’t need it. What is to be gained by having an actress pretend to be Farak reading her testimony on a courtroom set or smoking crack in a lab? It takes what needed to be a human story and makes it feel like tabloid.

And that hyperactive approach extends to so much of “How to Fix a Drug Scandal,” including interview soundbites that sound over-considered to get attention. There’s a human element missing from this entire production. It surfaces in some of the later episodes, particularly in the story of uncovering evidence of the extent of Farak’s problem (which was basically hidden from the attorneys trying to get clients out of jail), but it’s the perfect example of how using too many flashy, sensational techniques to tell a story can push the audience away from it instead of revealing the truth. Perhaps this is simply a story better suited to a well-researched magazine article or a news segment, but after four hours of watching “How to Fix a Drug Scandal,” I still don’t really feel like I know it. 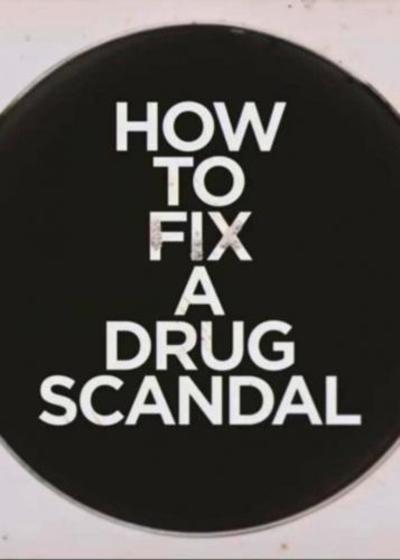