Sleazy Australian kidnapping drama "Hounds of Love" will make you wish you were watching a more traditionally nihilistic horror film. By defining a pair of kidnappers through a desperate, abusive relationship, "Hounds of Love" does something that many post-"Texas Chain Saw Massacre" slasher films have tried not to by asking viewers to see criminals as monsters who are sometimes also human beings too. The problem with the film therefore isn't a matter of whether or not it's worth empathizing with the wrong kind of people. Instead, what's frustrating about "Hounds of Love" is that writer/director Ben Young often undermines his characters' motives by only sometimes normalizing the behavior of Evelyn and John White (Emma Booth and Stephen Curry), a married couple who abduct teenage suburbanite Vicki Maloney (Ashleigh Cummings).

At first, Evelyn and John seem normal enough. This is during the part of the film where we hold our breaths and wait for our generic expectations to be confirmed and John and Evelyn reveal themselves to be unfathomably cruel. It's almost as if Young were working off of a check list of slasher film cliches: Evelyn seduces/disarms Vicki by offering her everything from a lift to booze before Vicki toddles off to a party. But Vicki never makes it to her appointment because she's predictably drugged, and then chained to a bed. This is Horror Movie 101: the friendly couple you meet in the middle of the night is only as proportionately nasty as they are initially nice-seeming. Young then goes for broke and has Evelyn lustily fellate John right after they chain Vicki down. While this is happening, John stares at Vicki. The meaning of this gesture is clear: I have you where I want you, and I enjoy dominating you.

But soon after this scene, Young asks viewers to start seeing the Whites as conflicted screw-ups. Evelyn is a divorcee, and is happy to be with John because he saved her from another dysfunctional relationship. And John is in debt to a knuckle-dragging local thug who is clearly too intimidating to be drugged and chained to a bed. John and Evelyn love each other, in their way. He delivers a long speech when she questions that bond, and reminds her—in a wounded, ostensibly concerned tone—that he has done and would continue to do anything for her. They've been through some hard times together and are apparently still going through them, given the girl they've got locked up in their guest bedroom.

But while the Whites are evidently not your typical kill-for-no-reason degenerates, they're also frequently defined by their abject behavior. He throws a fit whenever he sees that their dogs have defecated inside the house. Young treats us to close-ups of the offending pieces of scat, and boy, let me tell you, these things are not dry, innocuous pieces of waste. Young also rubs the violent acts that the Whites' commit in viewers' faces by lingering on wounds and the whites of Cummings' eyes on just long enough for us to suck in our breath and tsk-tsk the Whites for their crimes. Who could like these people after we've seen their victim's wounds through such an exploitative lens?

To be fair: only a naive horror fan would expect fair play from the makers of a film whose main subject is a girl who's been chained to a bed. But really, you don't get to ask viewers to sympathize with devils after you make them so damn unlikable. Just look at the opening sequence, where we're immersed in John's subjective point-of-view as he stalks and singles out Vicki while she plays volleyball with her peers. You don't have to be a rocket scientist to see that this character is lusting after these girls. Young's use of slow-motion photography and visual attention to young bodies straining with physical exertion spells everything out in bold upper case letters. And yet, thanks in no small part to Curry's nuanced performance, we're also supposed to see John as a man with a disconnect between his seemingly "normal" behavior and his abject deeds.

That's the crux of "Hounds of Love," the notion that people can be behave monstrously but also remain human at their core. But really, why would I want to care about characters whose backstories are so immaterial? Young has a good idea here, but doesn't work hard enough to flesh out the Whites so that their pre-Vicki lives are as rich as their current actions are degrading. "Hounds of Love" is ultimately an ugly film whose ambitions are never matched by its creators' limited abilities. 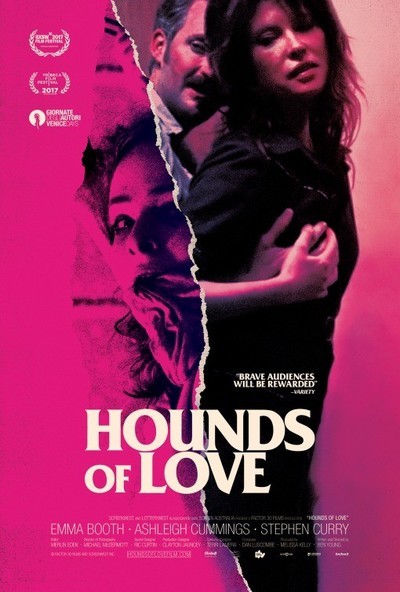