Annette Bening and Bill Nighy co-star as a longtime couple on the verge of divorce in “Hope Gap,” a drama that’s tastefully restrained to a fault in a particularly British manner.

Veteran screenwriter William Nicholson, a two-time Oscar nominee, based the film on his Tony-nominated play The Retreat from Moscow. The title was inspired by Napoleon’s invasion of—and messy withdrawal from—the Russian city, a subject that fascinates Nighy’s character and serves as an obvious metaphor for the destruction of his own marriage.

But despite the enormously talented cast and the gorgeous setting—the quaint, coastal town of Seaford, England, with its scenic and severe white cliffs—“Hope Gap” frustratingly keeps us at arm’s length. We are witnessing the collapse of a love affair and a family after nearly three decades—a devastating development, but never for us. The characters and their relationship are depicted in such superficial fashion that we don’t get a hold on who they are or why this bond ever mattered.

Bening has a striking and wise presence, as always, but she struggles with an inconsistent British accent, making the whole performance feel a bit mannered. It takes us out of her character’s bereavement, rendering it as yet another dramatic affectation. Nighy, meanwhile, portrays his character with much of his trademark, subdued awkwardness, which works as he strains to explain his feelings and justify his decision to leave. In between them is Josh O’Connor as their stunted, twentysomething son, who lives in London and visits infrequently. He’s meant to be our conduit into this insular realm but he’s a drag and a drip, so there’s not much for us to hold into in an ever-eroding situation.

Bening and Nighy star as Grace and Edward, who live a seemingly quiet, tranquil life in their cozy, book-filled Tudor. They are defined as a collection of facile traits, as oversimplified opposites, to the extent that you wonder what drew them to each other in the first place. Edward is a low-key high school history teacher, Grace is a passionate poetry anthologist. He wears monochromatic sweaters and button-downs, she drapes herself in flowy floral prints and paisleys. They each have their own desks in the living room area—his is tidy, hers is a mess, and they’re facing away from each other so their backs are constantly turned, forcing them to take in entirely different views out the windows on the neighborhood around them. It couldn’t be more literal.

Still, Edward goes about the routine motions of making Grace her afternoon tea, politely half-listening as she rants about this thing or another. “Why is it you only ever drink half your tea, I wonder?” he asks one day. “I wonder that, too. I suppose it’s because I don’t like things to end,” she replies, explicitly spelling out the film’s eventual themes.

Because on the occasion of the couple’s 29th wedding anniversary, Edward has decided it’s finally time to tell Grace he’s leaving her—and he’s invited their son, Jamie, down to help serve as a buffer for him and support system for her. The steadily tense conversation itself is the film’s highlight, with Edward delivering the news at the kitchen table along with tea and toast. In her stunned disbelief, all Grace can do is repeat his words back to him as he explains he’s met someone else and has been in love with her for the past year. She then shifts into sunny, can-do high gear, brightly willing things to work out of sheer denial. The rhythmic, rat-a-tat of their exchange is where the film’s theatrical origins are the most evident—and the most effective.

But from here, her neediness and his distance only increase, with Jamie functioning as a reluctant and reticent go-between. This manifests itself as a series of uncomfortable and tiresome walks along the seaside, a place that should inspire a sense of peace and wellbeing; instead, the sun beating down on the characters seems to chase them relentlessly as they bob and weave to avoid speaking their true feelings. Grace grows more bitter and humorously so, using her biting wit as a weapon while divorce proceedings ramp up. This is being done to her, she insists, and she’d be a far more sympathetic figure in the eyes of society and the law if she’d only been widowed instead.

She’s got a point—but in the case of this marriage, and “Hope Gap,” it’s too little, too late. 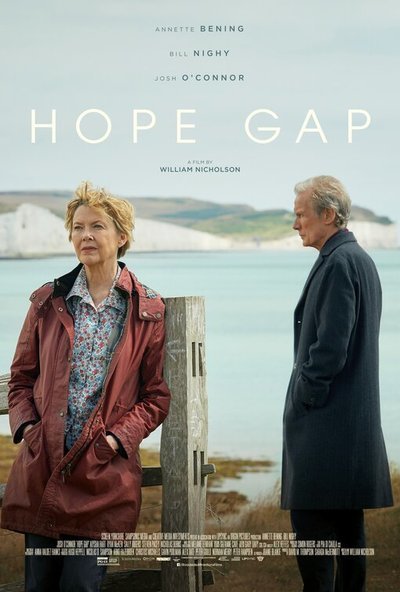 Rated PG-13 for some thematic elements and brief strong language.