There comes a time in many horror movies when you start to fear for the safety of the main characters in earnest, wondering on the side why they insist upon venturing down to creepy basements or act spectacularly nonchalant in the company of strangers exuding a sinister vibe. But if the suspense is handled well with the support of plausible character development, you go along with those questionable actions anyway. Devereux Milburn’s perplexingly basic camping-trip-gone-wrong horror “Honeydew” isn’t equipped with the kind of narrative or visual panache that earns your buy-in. With heavy-handed and generic atmospheric cues such as an orange-tinted cinematography, gross-out food-centric scenes, and an array of uncanny persons, this listless genre exercise mostly plays like a film-school-spun tribute to “The Texas Chain Saw Massacre” with some “Hansel and Gretel” clumsily mixed in, but without a political or philosophical foundation to stand on.

In other words, “Honeydew” makes it impossible for the audience to understand or root for its central couple, Rylie (Malin Barr) and Sam (Sawyer Spielberg), an inquisitive PhD student researching a fungal parasite infecting cows and people in a rural region, and her rash boyfriend, respectively. After a practically incomprehensible opening sequence that involves Rylie watching and reading material related to her study in a car, Sam loudly spouting lines from a script in a bathroom, and an old woman eerily handling wheat—all of these are accompanied by recurring motifs of frantic editing, eye-gouging split screens, and a nails-on-a-chalkboard sound design—the kind of movie Rylie and Sam are in gets revealed speedily. As soon as the duo pitches their overnight tent on an open field owned by a pipe-smoking old farmer who is unfriendly to trespassers, our experience with “Honeydew” gets reduced down to a dull waiting game until their fate is sealed.

Jointly written by Milburn and Dan Kennedy (also the DP here), the story tries to generate some depth around the couple’s dynamic, milking the toxic intrigue of their relationship for all it’s worth. Sadly, like everything else in “Honeydew,” this attempt remains frustratingly surface-level. Given an ultimatum to vacate their campsite in the middle of the night, the two discover their car is incapacitated due to a drained battery. (Is it Rylie’s fault, who might or might not have left the headlights on? Is it Sam’s? Or that kid with the uncanny stare who randomly keeps emerging during their trip?) Soon enough, a desperate walk with no cell coverage takes them to the farm of the aforementioned old woman, Karen (a scene-chewing Barbara Kingsley). She acts so frighteningly loopy, alarmingly sweet, and absent-minded that it’s anyone’s guess why Rylie and Sam accept her invitation to come in, and don’t protest when the unnerving lady offers to cook them a meaty supper in her grubby kitchen that has seen better days, in front of her heavily bandaged, barely mobile son Gunni (Jamie Bradley) who observes the happenings in silence.

The scenes in Karen’s homestead pit Rylie and Sam against each other rather aggressively, surfacing their various disagreements, while hammering home a vague point that has something to do with overindulgence and religion. (Just to make it a little less subtle, hair-splitting Christmas music constantly plays at Karen’s home.) A pragmatic thinker, Rylie impatiently demands answers from Karen, when the neighbor she claims to have called for help with the car never shows up. In contrast, Sam goes with the flow and happily accepts mountains of questionable food and baked goods prepared by the overeager cook, despite Rylie’s incessant policing over Sam’s unhealthy eating habits. Later on, when the couple agrees to settle in the old woman’s basement, all leaking pipes, grimy sheets, and peculiar sounds, “Honeydew” becomes even more laughable as everything points toward one obvious outcome that the protagonists stubbornly ignore: this couple better run for dear life.

When the inevitable finale with a thoroughly sign-posted twist arrives, you might realize you’ve already spent all your goodwill towards Milburn’s stylistically over-bloated film that chases one cliché after the next over the course of an overstretched running time. It’s telling when you think Rylie and Sam deserve what’s coming their way, or worse, don’t care about their eventual doom in the slightest. And that’s perhaps the scariest thing about “Honeydew.” 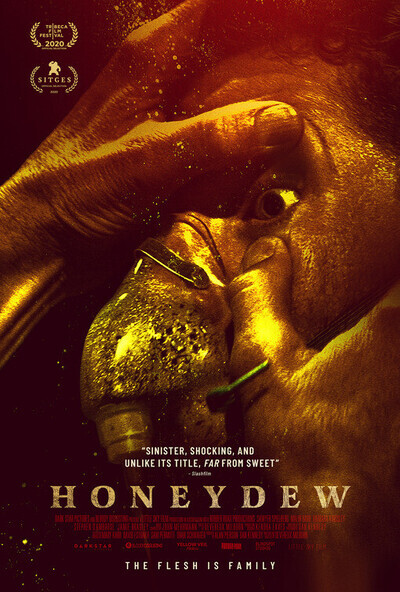