Home For The Holidays

There is a point in Jodie Foster's "Home for the Holidays" when a brother and his brother-in-law are fighting on the front lawn while the father tries to break it up by wetting them down with a garden hose. Looking across the street at the neighbors gawking, the father snarls, "Go back to your own goddamn holidays!"

The movie, which is about the Thanksgiving family reunion from hell, is not exactly a comedy and yet not a drama, either. Like many family reunions, it has a little of both elements, and the strong sense that madness is being held just out of sight. Have we not all, on our ways to family gatherings, parked the car a block away, taken several deep breaths, rubbed our eyes and massaged our temples, and driven on, gritting our teeth? That is not because we do not love our families, but because we know them so very, very well.

We get that sense in the opening scenes of "Home for the Holidays," as Claudia Larson (Holly Hunter) discovers she has been fired from her job at a Chicago art museum, and responds by kissing her boss; she's already building up holiday hysteria. Claudia is driven to the airport by her teenage daughter Kitt (Claire Danes), who confides she will "probably" experience sex for the first time over the weekend. At the other end, she's greeted by her parents, Adele and Henry (Anne Bancroft and Charles Durning). Henry's taking a home video. Adele has brought along an extra parka in case Claudia has lost hers (she has).

The Larson family home is a triumph of art direction. It has been furnished with dozens if not thousands of the sorts of objects found in mail-order gift catalogs. Not expensive catalogs, but the kinds of catalogs with 16 gifts on each page, each one a "miniature" of something you would not possibly want the full-size version of, such as a reindeer or a barbershop quartet.

Henry is a retired airport maintenance man. Adele chain-smokes all the time and can read her daughter's mind. ("Mom, I'm thinking of a change . . . I may not be at the museum all that much longer." "They fired you!") Soon Claudia's gay brother Tommy (Robert Downey Jr.) turns up with a new friend named Leo Fish (Dylan McDermott). The parents seem to accept their son's homosexuality without acknowledging it, which is an accurate note for many families. Claudia is disturbed by the absence of Tommy's former boyfriend, who was popular with the entire family.

Then Claudia's sister Joanne (Cynthia Stevenson) and brother-in-law Walter (Steve Guttenberg) turn up. Walter cannot stand Tommy. Tommy cannot stand Walter or Joanne, and finds a way to deposit a turkey in her lap without quite seeming as if he meant to.

These are all routine family problems compared with the arrival of Aunt Glady (Geraldine Chaplin), who is quite mad in her own style of passionate intensity, and has had a crush on Henry since she first laid eyes on him (he looked, she recalls, like a horse in a uniform).

What is just right about "Home for the Holidays" is that none of the characters act as if they are experiencing any of this for the first time. Even when Aunt Glady drinks too much and announces that her sister's husband kissed her the first time they met, all she draws is a resigned silence; we get the notion she may make this revelation several times a year.

Foster directs the film with a sure eye for the revealing little natural moment. And she realizes that although the Holly Hunter character supplies the movie's point of view, it is up to Durning and Bancroft to supply the center - just as parents do at real family celebrations. Bancroft and Durning have each been guilty, from time to time, of overacting, but here they both beautifully find just the right notes of acceptance, resignation, wounded but stubborn pride - and romance. There are moments when they dance together that help to explain why families do get together for the holidays, and Durning describes a memory of one perfect moment in the family's history, and we understand that although life may not give us too much, it often gives enough.

The story of Tommy, the gay brother, provides a counterpoint to the mainline madness. Foster and her writer, W. D. Richter, do not commit the mistake of making his character be about homosexuality. He is gay, but what defines him for the family is more his quasi-obnoxious personality, his way of picking on his boring brother-in-law, his practical jokes, his wounding insights, and finally his own concealed romanticism. Downey brings out all the complexities of a character who has used a quick wit to keep the world's hurts at arm's length. And in bringing along his friend, the mysterious Leo Fish, he has prepared a surprise that no one, certainly not Claudia, could have anticipated.

Holly Hunter is a wonderful actress. Here she has a more human and three-dimensional role than in her other current movie, "Copycat," but her performance in "Copycat" is even better, maybe because it stands alone, and in "Home for the Holidays," she reacts and witnesses as much as she initiates. It's not hard to guess that with her stature and presence she represents, to some degree, Jodie Foster. Indeed there are probably autobiographical elements scattered here and there throughout the cast, but that's not the point: What Foster and Richter have created here is a film that understands the reality expressed by Robert Frost when he wrote, "Home is the place where, when you have to go there, they have to take you in." 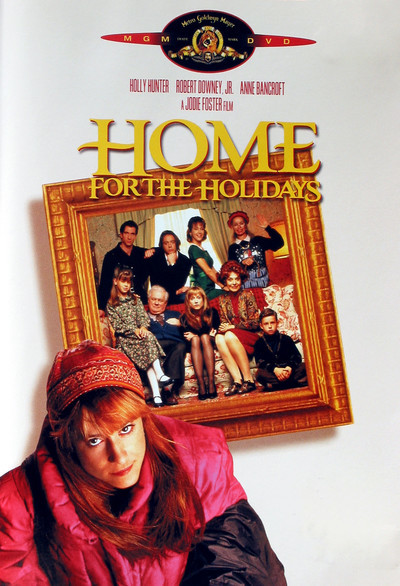 Rated PG-13 For Thematic Material, Language and Brief Drug Use