"Heal the Living" starts with a wordless and lengthy opening sequence so dreamlike, so beautiful and meditative, that everything that follows—and much follows—is informed by it. Three teenage boys meet up before dawn to go surfing. They huddle together, zipping up their wet suits, and then plunge into the cold, heaving ocean. Waves surge up, and the boys bob on their surfboards, three dark heads against the blue. There is no urgent storytelling impulse at work, no "let's get to the plot" impatience. It is the moment that matters: the thrill of standing up on the board, the silence that accompanies challenging physical activity, and the beauty of the waves seen from underneath the surface. The fact that the morning ends in a tragic car accident, leaving one of the boys in a coma, just intensifies the memory of that opening sequence—its vision of grace, strange beauty and the wonder of the momentary. Adapted from Maylis de Kerangal's 2014 novel, "Heal the Living" is director Katell Quillévéré's third feature, and shows her humane vision of the interconnectedness of humans and the fragile miracle of life. The plot comes straight out of any hospital-based episodic, but it's Quillévéré's approach that is so unique, and ultimately, so powerful.

As Simon (Gabin Verdet) lies in a coma, his estranged parents (Emmanuelle Seigner, Kool Shen) hover over him, brought together by trauma, bewildered at the disaster that has befallen them. The head surgeon (Bouli Lanners) informs them that their son is brain-dead, and gently reminds a new nurse (Monia Chokri) that the parents need to get used to the fact that their son is no longer "there." Tahar Rahim plays the organ donor consultant at the hospital, used to guiding grieving parents towards their terrible decision with the delicacy and gentleness required. The "story" is not the main thing. It's how the story is told that matters. Small details emerge. The head surgeon listens to hip-hop in his car and makes his staff do fist-bumps instead of hand-shakes. The organ donor watches YouTube videos of goldfinches in his office to unwind. In an absolutely extraordinary moment, the new nurse—who has a hickey on her neck (another nurse teases her about it)—loses herself in a fantasy for the five seconds when she's alone in the elevator. In Quillévéré's hands, nobody is peripheral.

As Simon's parents wrestle with their decision, another narrative emerges, traveling on its own separate track until it merges with the first. A former musician named Claire (Anne Dorval) and her two college-age sons (Finnegan Oldfield and Theo Cholbi) sit in an apartment together, across from a hospital. The texture of their relationship is sensitively drawn, shown in eloquent fragments, the three of them curled up in bed together watching "E.T.," the boys nervously solicitous of her, old beyond their years, but childlike in how they cuddle with their mother. Claire has a degenerative heart disease, and the three of them are waiting for news of a possible heart transplant. Quillévéré allows the story to tell itself, gently, slowly, no pushing, no obvious prioritizing. Because in such a life-or-death situation, the only priority is the moment. There can be no other.

Through the merging rivers of these two narratives is Quillévéré's devotion to how each small world glimpsed operates: how the organ donation team works, the midnightflights carrying ice-packed organs, the white board filled with possible recipients and donors, the almost balletic ritual of surgery preparation, the last-minute phone calls, the good-byes. It's a presentation of the tapestry of devoted human beings required to move a beating heart from one body to another, the end of one life, to (hopefully) the new beginning of another. If you take such things for granted, "Heal the Living" asks that you stop for a second, and give thanks to those who know how to perform such a miracle. We may have seen this all before, but not in this particular way. Every moment is treated with care. Nothing is manipulated to "up" the emotional response in the audience. It's not necessary.

The film is scored by the great Alexandre Desplat, and the music expresses the tension, melancholy and urgency of these momentous events in the characters' lives. It acts as connective tissue between the narratives. Tom Harari's cinematography is fluid and flexible: there are moments of sweeping startling movement, like in the opening as the camera follows Simon riding through the streets on his bike, careening around corners, the freedom and exhilaration of youth, and then there are moments of stillness, the camera capturing flickers of thought and emotion on a person's face. This is deeply human filmmaking.

Most people have had the experience of looking around at strangers on a crowded street, in a train station, or on a bus, and thinking, "I wonder what struggles that person over there may be going through in their life." "I wonder what burden that man may be enduring." "I wonder what that woman smiling to herself is thinking about." Seeing other human beings as real—as three-dimensional—even when you don't know them—is hard to do sometimes. It's so hard not to get caught up in yourself, in your own perception and point of view. "Heal the Living" knows that everyone is real, that life is real. It's what connects us all. 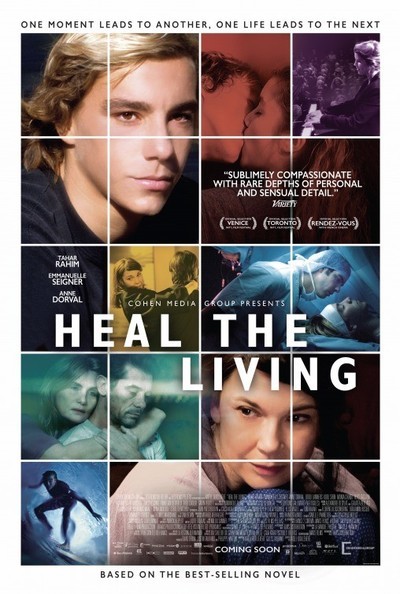