The appreciably nasty Finnish horror fantasy “Hatching” sometimes feels like a short movie that was needlessly stretched out into a (relatively brief) feature. It wasn’t, but this high-concept adult fairy tale, about a 12-year-old gymnast who discovers and raises a giant bird-monster, only comes to life in fits and starts, mainly thanks to its cast and crew’s appreciable craftsmanship. Kudos to everybody who made the aforementioned bird monster look slimy and feral, particularly special effects make-up supervisor Conor O’Sullivan, creature effects supervisor Gustav Hoegen, and their respective teams. Also, all due praise to the generally strong ensemble cast who, with the encouragement of director Hanna Bergholm, suggest a lot of sublimated tension through suppressed winces and performative smiles.

Unfortunately, in “Hatching,” the horrors of growing up—and more specifically of being raised by insensitive, repressed parents—are otherwise not that disturbing or even memorable. Bergholm (who has a story co-author credit) and screenwriter Ilja Rautsi deserve credit for effectively practicing the Roger Corman rule of teasing viewers with something good ‘n exploitable (in this case: bird-monster-related) every ten minutes or less. But while your mileage will obviously vary, “Hatching” never really congeals into something that’s as unsettling as it is gross.

The main appeal of Tinja (Siiri Solalinna), a shy pre-teen, often seems to be that she’s not her stifling mother Äiti (Sophia Heikkilä). Or maybe Tinja’s just unsure of how to live with her mother’s many expectations. Äiti constantly documents Tinja’s activities for her influencer-style blog, all about her “normal Finnish family.” Which in turn explains their family’s floral wallpaper, pastels-and-polos attire, and glass-and-porcelain home décor. That set-up also kind of explains why there’s nothing shocking about the violent bird-related climax of an early scene: Tinja’s mom snaps a blackbird’s neck after it flies into Äiti’s home and breaks some things as it struggles to escape. A good start for a horror movie, but not unexpected given how plainly monstrous Tinja’s mom tends to be.

Äiti has some humanizing qualities, and she’s also superficially oppressive to a very immediate fault. Äiti wants her daughter to practice, practice, practice until she earns a slot at an upcoming gymnastics competition. But Tinja can’t nail her dismounts and always seems to land on either her side or her knees. Tinja’s mom also seems to have crushed the spirit of her dutiful and somewhat nervous husband Isä (Jani Volanen), who takes orders and keeps up appearances, but otherwise doesn’t seem to matter. Oh, also, Tinja finds a baby bird in the forest and raises it in secret. It turns into a giant bird-monster and inspires a weirdly lackluster coming-of-age identity crisis.

Everything that happens in “Hatching” seems to happen either in spite of Äiti or as an aimlessly pissy riposte to all of the bougie values she seems to represent. Because while Äiti knows exactly how she prefers to see herself, Tinja has no clue who she’s becoming as her ideal self-image slips out of her mum’s clammy grip.

Tinja also experiences some additional social pressure thanks to Reetta (Ida Määttänen), a new neighbor who happens to be a talented gymnast. But even that subplot only serves to redirect viewers to the undeveloped mommy/daughter tension that subsumes everything in “Hatching,” except maybe the simple pleasures of watching a young girl raise a literal monster of her own.

I’m trying not to overemphasize the creature effects in this review because there’s nothing worse than over-hyping the main saving grace of an otherwise promising, but underwhelming horror movie. But my reservations about "Hatching" have little to do with its creators’ execution so much as their limited creative vision. Äiti is a familiar monster who’s mainly interesting because of Heikkilä’s performance and Bergholm’s effective direction. Otherwise, there's not enough room for human touches in “Hatching” since everything but the bird-monster’s design is contrived and shallow. There are some great ideas scattered throughout, but the fact that Äiti never seems to come alive as a character makes it hard to recommend this movie for what its creators do well.

I often wished there was more to “Hatching” than just a few weak digs at bad mothers who are a little too online. Maybe you have to be Finnish to see “Hatching” as a blistering and culturally specific satire. Or maybe there’s just not much to get about the movie.

Now playing in select theaters and available on digital platforms on May 17th. 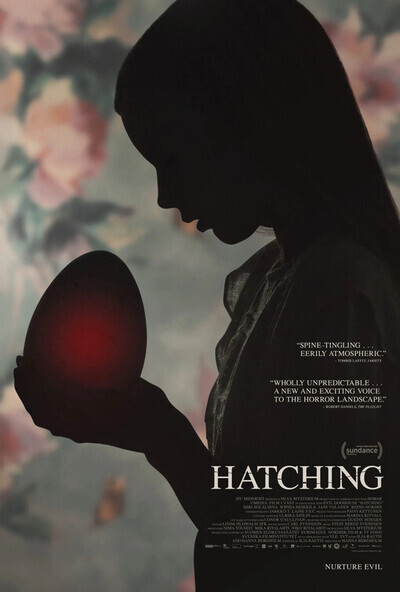