Harriet M. Welsch shakes up her pop bottle to make it fizz, closes her eyes, and makes a wish: “I wanna see the whole world, and I wanna write down everything.” She becomes a junior Thomas Wolfe, prowling her neighborhood with a treasured notebook and making entries about the man with all the cats, the woman with the weird garden and the goings-on at the Chinese restaurant.

Harriet is the heroine of one of the most popular modern books for children, Louise Fitzhugh's Harriet the Spy, which has sold 2.5 million copies and served, I gather, as a great inspiration. On a book review page on the World Wide Web, adult women write in to testify to Harriet's influence: The book made one want to become a writer, another to become a journalist, and a third (who did not read it as carefully) to become a private eye.

Now here is the movie, made in cooperation with Nickelodeon and aimed at kids about the same age as Harriet, who is in the sixth grade. It is not a very technically accomplished movie--the pacing is slow and there are scenes that seem amateurish--but since Harriet doesn't intend to inspire anyone to become a movie critic, perhaps it will work a certain charm for its target audience.

Certainly Michelle Trachtenberg (of Nickelodeon's “Adventures of Pete & Pete”), who plays Harriet, makes a plucky young neighborhood snoop. She stands on piles of abandoned furniture to peer through dusty windows and climbs up on a roof to spy on the man with the cats, who has named them all after jazz greats.

Harriet writes down everything in her journal, in bold, confident printing that a graphologist would say reveals her need to spell things out very clearly for those who may not be as swift as she is, a category that includes her parents. They live in a house that looks like it was produced in a collision between the Arts and Crafts movement and shop class, and spend most of their time being vaguely alarmed by their prodigy.

Luckily, Harriet has a more understanding adult in her life--her nanny, named Ole Golly (Rosie O'Donnell), who tells her, “There are as many ways to live as there are people in this world, and each one deserves a closer look.” Harriet bonds with Golly, but one night Golly and a gentleman admirer take Harriet along on a dinner date, they get home late, the parents are hysterical, and Golly leaves: “It's the right time.” Harriet now approaches a period of crisis. She creeps on her tummy across the landing to spy on her parents, she makes detailed entries in her notebook, and she gets into a conflict with her classmates, who start their own counterspy operation. What with one thing and another, Harriet finds herself covered with blue paint and ordered by her parents to stop with the notebook.

Harriet counterattacks, with a hit list of her enemies and her plans of revenge. We get the idea that as an adult she would not be someone we'd want as a sister-in-law. But she is a likable kid who makes friends with strange local legends like Agatha K. Plummer (Eartha Kitt). And her fantasy world allows an escape from the ho-hum life at school, where the lessons seem to consist largely of showing the girls a film named “Girl to Woman,” and the boys a film named “Boy to Man” (“this is an actual photograph of a boy's vocal cords”).

The materials are here for a better film. The director, Bronwen Hughes, has made one more suited for the after-school slot on Nickelodeon than for theatrical release, where it simply isn't in the same league with “The Secret Garden” or “A Little Princess” (whose Vanessa Lee Chester plays a best pal again this time).

Still, sometimes the materials of a movie like this work on audiences not much concerned with style or polish. Harriet is a good role model, a smart, curious girl who keeps her eyes open and writes everything down. 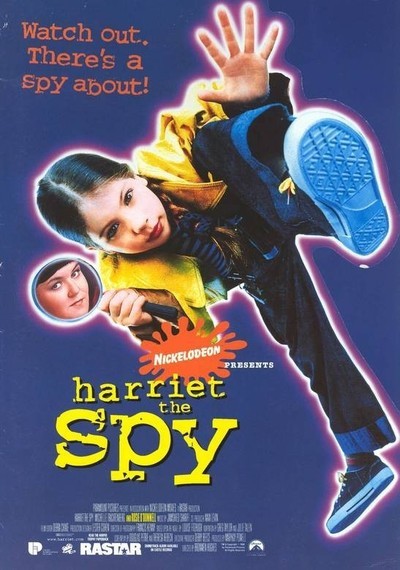 Rated PG For Mild Language and Some Thematic Elements