“Harpoon”: The title is both a noun and a verb, the promise of excitement and the threat of betrayal. It also represents a bit of a running gag in writer/director Rob Grant’s pitch-black comedy, as the weapon in question during the film’s fateful yacht trip is actually a spear gun, and not a harpoon at all.

That kind of playful bait-and-switch is emblematic of Grant’s approach throughout his zippy film. You think you know who the players are, how their relationships work and what they want from each other. But Grant keeps us on our toes the longer he leaves his characters stranded on the high seas, and he’s constantly using his confined space in inspired ways.

“Harpoon” begins life on dry land, though, as it introduces its three key figures. Jonah (Munro Chambers) and Richard (Christopher Gray) are best friends, although they couldn’t be more different. Jonah is an average-looking, middle-class sad sack who’s in the process of packing up his parents’ house after their deaths. Richard is a rich, pretty-boy hothead who’s frantically speeding over to that house to confront Jonah with some jealous accusations. In between them is Sasha (Emily Tyra), Richard’s beautiful and elegant girlfriend who also functions as a mother figure to Jonah. She’s both the disruptor and the peacemaker. They’ve all settled into their assigned roles in this dysfunctional triangle, but that bond is about to be tested.

The three go out on Richard’s yacht for a day trip off the Atlantic coast, with plans to scatter the ashes of Jonah’s parents and try out the gift Jonah and Sasha have gotten Richard as a birthday surprise: Think of it as Chekhov’s Spear Gun. It’s a seemingly idyllic day with the sun shimmering on the water, a light breeze in the air, a cooler full of beer and not another boat around as far as the eye can see. But then one bad thing happens, then another, then another. Eventually, several days have passed with the hope of rescue drifting further away. Tensions flare, secrets emerge and long-held resentments bubble up and boil over.

Grant subtly and seamlessly shifts tone from darkly funny to just plain dark, as the situation at sea grows increasingly dire. He strikes a tone of general bemusement off the top with the use of narration from Brett Gelman, who snarkily postulates about the nature of friendship and makes meta references to the movie’s chapter title cards. But the sly sense of fun that marks the movie’s start gives way to paranoia and gore until “Harpoon” ultimately morphs into a straight-up horror flick. Some sequences are so exquisitely gnarly, you’ll have to watch them through splayed fingers—but then they’re bookended by gallows humor to break the tension.

Within this tight space, the three actors get plenty of room to explore their characters’ ever-evolving natures. We think we know these people—hell, they think they know themselves and each other—until they eventually reveal their true intentions. Chambers, Gray and Tyra do a lot with a little; this is essentially a play, on film, on a boat. But all the actors get to enjoy giant arcs within a finite setting. Gray can be chilling, his handsome features giving way to ugly impulses. Chambers is wily and increasingly unnerving as he reveals Jonah’s desperation. And Tyra ably balances the challenge of being the voice of reason and sanity even as Sasha’s own transgressions come shockingly to light.

You may realize there’s not much to “Harpoon” as it sails off into the sunset, but that’s OK. This is one of those movies where the journey truly is the destination. 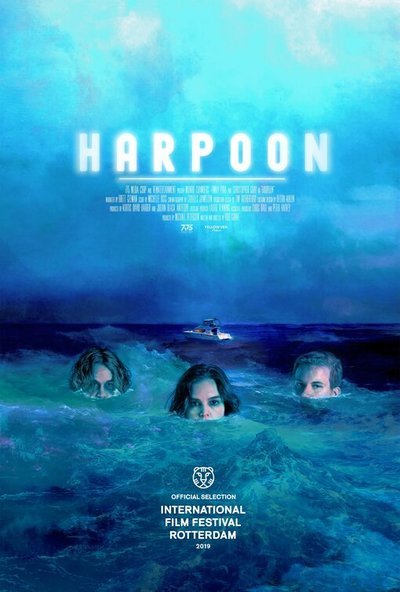