A mellifluous voice in the Siberian wilderness

Film director Werner Herzog's voice is so distinct and soothing that those of us who swear by it as a tonic for the soul sometimes assume the man is a household name. I made that mistake recently while chatting with a friend who praised Christoph Waltz's performance in "Django Unchained." "Yeah," I said, "The only person who could play a multilingual, multi-genius German impresario better than Waltz would have been Herzog."

I played her Herzog's reading of the children's book Go the Fuck to Sleep and his narration for Ramin Bahrani's short film "Plastic Bag." She was hooked. The mellifluous German accent, that rising-falling modulation, worked its magic.

And that was just Werner lending his singular sound to other people's projects.

Herzog's voiceover narration has been as powerful a utility for his own potentially ponderous documentaries as Clint Eastwood's profile has been for the latter's tough-guy dramas. The films could probably stand on their own merits without That Voice, but why should they?

Like "Grizzly Man," Herzog's latest documentary, "Happy People: A Year in the Taiga" is mostly built around another filmmaker's priceless footage. Russian videographer Dmitry Yasyukov shot four documentaries about Russian fur trappers in the Siberian Taiga, a remote wilderness larger than the whole of the United States. Herzog happened upon the films at an L.A. friend's house and became as obsessed with their beauty as he once was with Timothy Treadwell's footage of grizzly bears.

His authorial signature comes through in the way he edits the material and gives it meaningful context through narration. It's a touching gesture, one filmmaker finding the glory in another's images and amplifying it through his own generous and idiosyncratic vision. What Herzog gleans from Yaskyuov's exhaustive material is a simple observation: The men of the Taiga are heroes of rugged individualism.

“They live off the land and are self reliant, truly free,” Herzog intones, as a Klaus Badelt score works to send a chill of admiration up our spines. “No rules, no taxes, no government, no laws, no bureaucracy, no phones, no radio, equipped only with their individual values and standard of conduct.”

In nearly every Herzog documentary there is a speech like this one, wherein the director reveals in plain language his passion for his subject. This particular song of praise says that people who live simply, honestly and responsibly are generally happy people. It also sings of tradition more eloquently than Teyve in "Fiddler on the Roof." Work and tradition abide. One hunter boasts that his skill is an inheritance of a thousand years of practice and refinement.

There is another way to interpret Yasyukov's material, as a bleak, miserablist view of the hunters' circumstances that emphasizes the fact that they hardly ever have a moment's rest. Work is a constant, and nature always threatens to freeze, drown, starve or (in the form of aggressive bears) eat them. This is the perspective a young Herzog might have chosen. “Overwhelming and collective murder” is how he described nature during the making of his bleakest, angriest epic, "Fitzcarraldo." (His grandiose rants were just as fun to listen to when they were depressing.)

Instead, this time we get celebratory scenes of a hunter and his son serenely enduring mosquitoes that swarm over every centimeter of exposed flesh during a dank Taiga summer. Yasyukov's footage exhaustively documents the hunters' work processes, so Herzog uses it to take us through each step of making mosquito repellent from scratch. (To my surprise, it's similar to preparing old-fashioned blackface.)

Though they use manufactured equipment like snowmobiles and wear some presumably factory-made clothing, much of the technology these trappers and their families employ is built from scratch. In a fascinating segment that suggests Herzog and Yasyukov would produce great instructional DVDs ("How to Survive the Apocalypse"), a hunter shows us how to make wooden skis that will outlast the most expensive synthetic designer ones.

Fascination with processes and with the men who master them to become expert woodsmen leaves Herzog no time to address their wives and children, whom we glimpse only at hunting sendoffs and when the men return to their homes loaded down with quarry. Whatever routines occupy the wives is of little interest to either Yasyukov or Herzog. What we do catch of them says that they, too, are very happy people. “I'm alone again,” one wife says, as her man heads out on another long expedition. In a typical arthouse fiction film, she would be the face of uncertainty and despair in that moment. In "Happy People," she just states the fact with a bittersweet smile. Herzog cuts away (or Yasyukov's cameraman stops recording) quickly.

The dogs, on the other hand, receive rapturous attention. One thing I learned from "Happy People" is that a dog in the Taiga is like a horse in the American Frontier: not merely a “best friend” but a lifeline. A brooding hunter becomes emotional when recalling a dog who gave up her life defending him from a bear attack. We see the dogs set to work with military discipline. Herzog adds some stirring, heartening Badelt music to a scene of a dog keeping pace with his master's snowmobile for nearly a hundred miles.

So the focus is tight, but the love comes through in many ways. Herzog mentions that one of the fishermen who shot some of the footage is a relative of the great Russian filmmaker Andrei Tarkovsky. The instant that name came up, I was struck with memories of all the odes to Russia's natural beauty in Tarkovsky's nostalgic films. It made me consider that Herzog might have taken on this project as a gesture of German-Russian relations—an interdependent association now, but historically one of horrific wars. Imagine a Japanese filmmaker celebrating Chinese traditions. (Actually, there are films like Kenji Mizoguchi's Japanese take on Chinese history, "Princess Yang Kwei-fei," and they tend to be weirdly interesting.)

The fact that Herzog shot none of the footage comes across most strongly when we briefly visit a couple of indigenous Taiga people. They build a boat with staggering precision, row it out onto the icy waters, and then they are gone from the film. I can't imagine Herzog having access to folks whose traditions go even further back than the Russians leaving it at that.

All of this apparent Walden-like freedom struck close to home for me—or would, if I had a home. I stepped off the grid in New York City four years ago, trying to find a simpler way to live that would free me of corporate wage-slavery. Four years later, I've found that such freedom is virtually impossible in American cities. To live as free and clear as the men of the Taiga do, I would have to go to a farm, a commune—or the Taiga. On a landscape of concrete, there is no hunting or homesteading, just purchasing and renting. Parks and community gardens preserve some testy relationship with the natural world, but, let's face it, the world I and most folks reading this essay occupy keeps us dependent upon corporate delivery systems for our survival essentials. Are we happy this way?

Herzog, whose films have captured ecstatic faces in prisons, asylums, rainforests and arctic base camps, would probably answer, “That is up to you, my friend. You must work with whatever you have been given,” in a voice that could make a man caught in a bear trap smile. 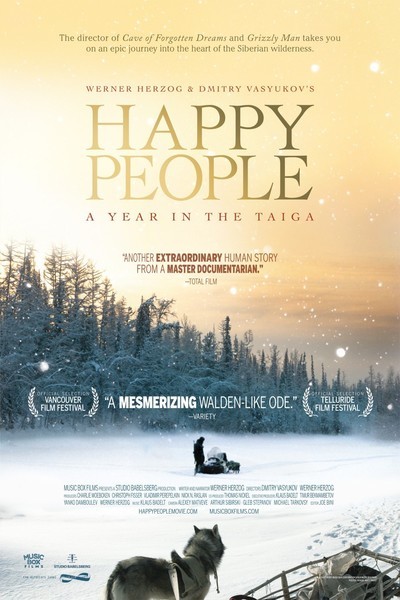