It was only two years ago that Eliza Hittman’s heart-wrenching slow-burn “Never Rarely Sometimes Always” gave the viewers a window into the life of a rural American teenager seeking an abortion. The story was contemporary, but the brutal world Hittman built felt befuddlingly of the past. “How can an abortion be this tough to procure today in this country, just a few hours outside of New York City,” reflected those of us in favor of bodily autonomy and a woman’s right to choose the future she wants for herself.

Today, Audrey Diwan’s masterful “Happening” creates a similar bewilderment, but perhaps in reverse. It’s a period film set in 1960s France, but the predicaments its desperate protagonist goes through to access an illegal and unsafe abortion might very well be the new, frightening American future, with the Supreme Court voting to overturn abortion rights and the landmark Roe v. Wade ruling.

Through an exquisite artistic grip on the material (adapted from Annie Ernaux’s autobiographical novel), Diwan’s subtle handling of the era very much propels the aforementioned disorienting and timeless feel of the movie. Through understated production design elements, lived-in and repeating costumes (realistic for characters from limited financial means), and cinematographer Laurent Tangy’s clear-eyed and buttery lens, the agelessness Diwan aims for instantly proves to be a smart stylistic choice for a subject and assertion relevant to any society, at any moment in time. That assertion goes like this: women’s reproductive rights are perennially fragile and patriarchy’s insistence to control females’ prospects outside of marriage and motherhood is the source of this fragility.

Dwelling in this reality is the silently despairing Anne, played by a sensational Anamaria Vartolomei in a quietly towering performance. She is a middle-class literature student who hopes for a long, healthy career in her field. But she is pregnant, alone and without choices. Working while mothering in 1963? Not an option. An abortion? In that French period, also impossible ... unless of course she finds a fast and reliable in on a whispered-about illegal abortionist and hopes that the procedure is done by a medically sound someone and not a back-alley butcher.

Quickly, Anne finds that her situation means loneliness. There is no one she can talk to—in one of the many revealing scenes of “Happening,” a friend of hers hastily wraps up the conversation when the topic of abortion gets as much as mentioned, without even knowing that Anne is pregnant. The young girl’s hesitation rings true. The slightest hint of suspicion, and people could have been facing real consequences in that era, like losing their jobs, their academic affiliations and even facing jail time. Doctors and professors that surround Anne are similarly under the gun regardless of their varying degrees of sympathy for her. Out of fear, one caring physician refuses to help her despite being one of the more understanding ones. In order to preserve the integrity of your experience with the suspense Diwan carefully crafts, I won’t spell out here what an unsympathetic other does to her.

As Anne’s situation closes in on her from all directions and her belly starts growing, Diwan dials up the film’s tension, intensified by chaptered segments that emphasize the alarming irreversibility of time. Throughout, she favors long takes over frantic edits, immersing the audience in Anne’s anguish, anxiety and even physical pain matter-of-factly in a fashion that brings to mind Cristian Mungiu’s “4 Months, 3 Weeks and 2 Days.” Pay close attention to the film’s virtuoso centerpiece when it arrives, during which the doe-like girl enters a barebones home and submits her body to the care of a woman who performs illegal abortions to girls in need. Diwan shoots the sequence in one spine-tingling take, making one really feel both the sting and terror of Anne’s situation. Elsewhere, whenever she wants to underscore the vulnerability of Anne’s body, the filmmaker opts in for similar methods, elegantly tracking the action in slow, patient takes while focusing on the actor’s facial fluctuations. In a part that asks a lot of her, Vartolomei masters the art of silence, somehow managing to react, consider and protest, often without a saying single word. 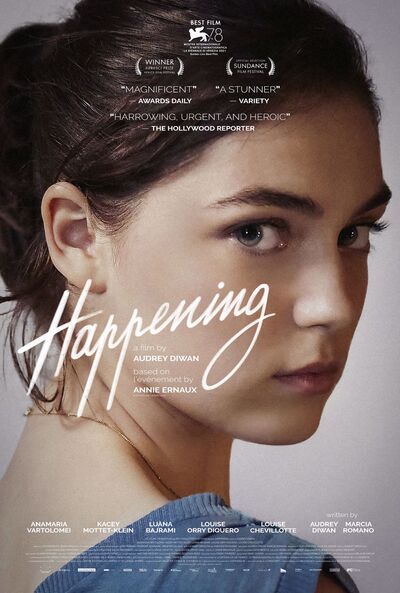