The title character in “Hannah,” a drama set in Belgium, is played by Charlotte Rampling. In the film’s first shot, we see her in close-up from a slightly elevated angle. Her face is pale and looks somewhat stressed, but what’s really striking is what we hear. Her voice is making a strange, keening, undulating sound, not unlike an animal in desperation or pain.

Before the shot ends, Hannah’s face relaxes somewhat as she listens to another woman, off-screen, make a similar set of sounds. The succeeding shots show Hannah and others seated on the floor, doing some sort of exercise. Though this looks like it could be a form of group therapy, we later understand that it’s an amateur theater group warming up for rehearsals. Although we are soon led away from that initial shot, its opaque suggestion of strangled desperation calls to mind a word that’s sure to appear in reviews of “Hannah”: miserabilism.

That term is defined as “the quality of seeming to enjoy being depressed, or the type of gloomy music, art, etc., that evokes this.” In modern cinema, miserabilism of course has a respectable pedigree that runs from Antonioni’s collaborations with Monica Vitti, through such Bresson films as “Une Femme Douce” and “L’Argent,” down to contemporary filmmakers including Michael Haneke, Aki Kaurismaki and the Dardenne brothers. But these films present their gloominess in contexts of genuine artistic purpose and original vision, not as an end unto itself.

When miserabilism becomes an academic exercise in self-regarding formalism, it yields weak-tea films like “Hannah,” which follow the rules laid down by the filmmakers named above but without their probing spirit or inventiveness. Directed and co-written by Andrea Pallaoro, the film constructs a dour portrait of a beleaguered woman mainly by stripping away almost all dramatic or narrative interest and explanatory context, leaving the viewer to admire—or not—its nuanced photography, depressive atmospherics, and Rampling’s sober performance.

In its early scenes, we see Hannah in her simple flat with an elderly man (Andre Wilms) that we deduce to be her husband. It’s hard to know because they barely speak. (The film’s entire dialogue could probably fit onto three or four typed pages.) She cooks a meal, then we see them eating it. The overhead light goes out. The man gets up, goes into the next room, then comes back and changes the bulb. They go on eating. That’s it.

A few scenes later, we see the couple leave their apartment and go into town (this is the part of Belgium where everyone speaks French, but we’re not told where exactly) and arrive at an institution, where the man remains. From the very few clues we’re given, it’s later possible to figure out that he’s been sent to prison in disgrace, possibly due to a crime for which there may be incriminating photos in the apartment. We never see Hannah talk with lawyers, police or prison officials about any of this.

Instead, we observe the daily humdrum of her life, from bathing her dog to observing odd characters on the subway to dealing with a leak from an upstairs apartment. Besides her theater group, where she performs but never talks with her fellows, her other activity that involves contact with other humans is working for a rich young woman who has a mentally challenged young son. From this, we mainly learn that Hannah does menial work.

An hour into the 90-minute film we get its one real spark of real drama and emotion, which comes after we see Hannah leave a phone message for her son saying she wants to bake a cake for the birthday of her grandson, Charlie. A few scenes later, when she arrives at a suburban house with cake and presents in tow, Charlie runs out excitedly to greet her, but his father brusquely pushes the boy back into the house and yells at Hannah that they want nothing to do with her. She goes to a toilet and weeps. A bit later, we see her one big smile in the film, when she tells her husband of the great birthday meal she enjoyed with Charlie, who sent his love to Grandpa.

As these scenes may indicate, there is a real seed of dramatic possibility in “Hannah,” but Pallaoro smothers it beneath the lacquer of the film’s fastidiously mannered minimalism. Indeed, the film is so lacking in dramatic attractions that it poses the question of why any distributor would take it from the rarefied precincts of the festival circuit, where it belongs, and put it in theaters.

The obvious answer: Charlotte Rampling. Now 72, the actress remains a formidable screen presence and she gives a rigorously controlled performance here, her hooded eyes and stony visage suggesting a woman who wants at all costs to suppress her emotions. It’s a haunting image, but it may not be all to the good of “Hannah,” since the filmmakers seemed to have relied on it too much and thus avoided what could have extended and amplified its meaning: a story. 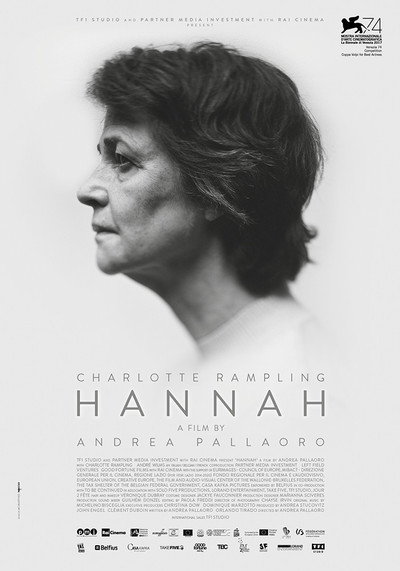