Luke Greenfield’s “Half Brothers” is a tale of two stories. One track gives the movie its title: two half-brothers who could not be more different meet for the first time when their father is dying. Because this is a comedy, disaster ensues. Their father dies suddenly, and because their old man loved puzzles, he sends them on a midwestern road trip to answer their questions about his past, including why he left his oldest son Renato (Luis Gerardo Méndez) back in Mexico. The other is their father’s dramatic and unpredictable story of an immigrant’s life, one that leads him away from a family in Mexico to starting one in the United States. It’s a complicated story, not just in the way in which it comes together, but in its ethical, emotional and financial quandaries.

The movie begins in the mid-'90s, with a boy and his cool dad, Flavio (Juan Pablo Espinosa), who happily indulge in mischief and flying airplanes. But when the economy tanks, Flavio heads north and never returns, leaving a young boy to grow up in anger and resentment. Now a grown man, Renato is caustic and has no friends—yet he somehow managed to find himself a fiancée with a small boy of her own. A call from his dying father’s new wife brings that rage to the surface, yet when he goes to the States to say his goodbyes, he instead learns he has an annoying half brother, Asher (Connor Del Rio), and now has to solve his father’s last riddle to find out the truth behind his life’s story.

Flavio’s story about coming to America to find work is an infinitely more compelling story than the boy’s bickering road trip. He discovers a cruel immigration system, racism against Mexicans, and at first, very little money. But he also finds his way into opportunity and the kindness of others. Unfortunately, his tale is told in stop-and-go fragments as his sons piece together his journey. Sitting in the car with the half brothers of the movie is just short of punishing. Separately, they’re pretty rough to tolerate on their own. Renato has the makings of a low-grade socio-path, thinking only in unfeeling logic and unsympathetic to anyone he perceives as lesser than he is. Asher is by all accounts a stand-in for all the terrible stereotypes about Americans. He’s entitled, rude, lazy, hasn’t a work ethic in sight and talks for hours without saying anything at all. In short: he’s Renato’s antithesis. But instead of the Odd Couple-like match-up working as comedic fuel, it sputters. Espinosa and Del Rio have little to build on than their characters’ flimsy outline, and neither can really make their rapport work.

From the outset, the narrative begins with a strained premise, one that could have easily been reduced to a quick bedside confession were it not for Flavio’s twisted scavenger hunt. Ali LeRoi and Eduardo Cisneros’ story, which was brought to the screen by Cisneros and Jason Shuman, holds little surprise in the brothers’ tale. They fight, they make up, they fight and make up, repeated until the end. There’s a bit more care given to Flavio’s side of things, although the dots connecting the threads of his story feel fairly disjointed.

Greenfield’s film has some fun at the expense of the American side of the border, and not undeservedly so. There’s a running joke that Renato must contend with American’s limited knowledge of their neighbors, which often revolve around questions about ziplining. So while “Half Brothers” lands a few good laughs, there are a few slapstick sequences that make almost no sense at all, like why Asher drives 60 miles out of the way just to steal a goat. There could have been many smarter scrapes and awkward conversations that would have gotten the audience to laugh without veering the movie so off-course. Because of the movie’s uneven story and characters, it’s a bumpy ride no matter which route you take. 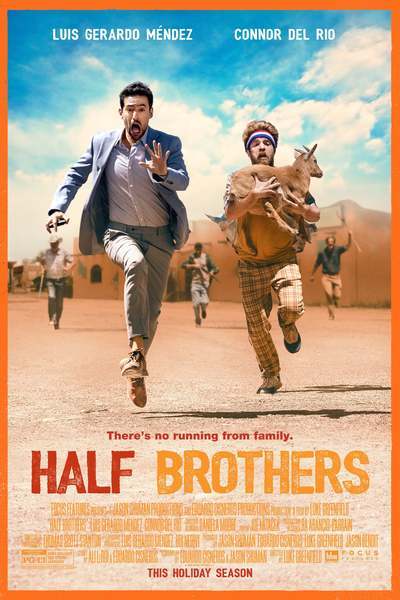 Rated PG-13 for some violence and strong language.

Vincent Spano as Mr. B

Stephen R. Estler as The Foreman