Hale County This Morning, This Evening

RaMell Ross’ documentary, “Hale County This Morning, This Evening” cannot be watched while simultaneously distracted by outside forces like cell phones or conversations; its immersive lyricism demands the full brunt of our attention. The film has an unusual, time-jumping cadence that’s punctuated by strange sounds, odd music and beautiful, superimposed visions of sky and earth. There are unexpected camera angles and long moments that at first seem monotonous but pay big dividends. Ross weaves all these elements together in such a way that you eventually realize the film is teaching you how to watch it, subtly coaxing you onto its wavelength. Suddenly, you feel like an honorary citizen of the titular place, someone temporarily woven into its fabric. I understood this the moment that Ross’ camera sped down a street he had slowly perused in the film’s opening scene. Not only did I recognize buildings and stores, but I knew exactly when the car travelling this road would see the Alabama state highway signs.

At times, “Hale County This Morning, This Evening” evokes the work of Thai filmmaker Apichatpong Weerasethakul, whose films “Tropical Malady” and “Uncle Boonmee Who Can Recall His Past Lives” tell the stories of people and places primarily through their visuals. So it’s no surprise to see his name listed as a creative advisor here. As in Weerasethakul’s work, the setting is haunted by the ghosts of those who came before, though perhaps in both cases “haunted” carries too negative a connotation. A better description might be that the locale is infused with the remnants of its history, and every so often, we’re allowed to hear or see them co-existing with the current tenants of Hale County.

Ross separates his movie into several movements, each preceded by a message written on a black screen with white lettering. Sometimes it’s a question, either straight-forward or meditative. Other times, this screen sets the stage for what we’ll witness. One screen carries a tragic message that is shocking both in its suddenness and in its blunt delivery. But the first message we see sets the stage and provides a mission statement. It reads “the discovering began after I moved to Alabama in 2009 to teach photography and coach basketball. Photographing in my day-to-day I began filming, using time to figure out how we’ve come to be seen.”

That last sentence is of crucial importance when it comes to understanding Ross’ intentions. Ross is referring to African-Americans like himself (and your humble reviewer) and the way we are depicted, interpreted and observed by American society. “Hale County This Morning, This Evening” is all about how perception changes depending on whose gaze is being reflected and how informed the owner of that gaze is. Events happen in this non-fiction film that, in a fictionalized film, are often depicted in scenes heightened by melodrama and stereotype. Ross’ intimate knowledge of the location and of his subjects, Daniel and Quincy, strips away the usual artifice and baggage, presenting these events as matter-of-factly as life itself. It’s an uncorrupted viewpoint, though Ross is on occasion quick to remind you of prior cinematic and societal reflections of Southern Blacks. For example, images of a blackface performer (I believe it’s African-American vaudevillian Bert Williams) show up in jarring fashion, intercut with footage of driving up to an old plantation.

Since it jumps across time without warning, “Hale County This Morning, This Evening” doesn’t have a straightforward narrative arc. But it does tell the stories of Daniel and Quincy, two high school students who are on the basketball team. We first meet Quincy during the gruesome spectacle of his nose-piercing. Daniel’s introduction is of him dancing for the amusement of his peers. While they and other people we meet talk to Ross and provide some exposition, more often than not the camera is just a casual observer without commentary; it’s simply watching people go about their daily business. This allows the viewer to be present, though not in a “fly-on-the-wall” sense. The camera subtracts a casual observer’s protective distance and gets close to these people, putting you in the room with them in probably the same spot you’d be had you gone in person. At some points, the person being filmed responds to the camera as if he or she were responding to you directly.

One of the best scenes highlights this: Kyrie, Quincy’s child with girlfriend Boosie, entertains himself by running around the room while his family watches old movies on TV. The camera remains static as Kyrie runs and runs and runs. The scene, like several others, seems to go on forever before you realize you’re watching a story of sorts. It becomes clear that Kyrie is engaging in play and also performing for the camera. Another long scene observes a locker room before a basketball game, lingering long enough for us to observe what each player is doing if we so desire—it becomes another little story, an observation that’s as mundane as it is enlightening.

As befitting a photographer, Ross films spectacular images with compositions that tell stories without words. But snippets of dialogue help us piece together the current story of this historical region. A career employee describes how cold it is inside the county’s biggest employer, a catfish factory. There’s talk of an honorary celebration in nearby Selma that was attended by Oprah Winfrey. And there are also several scenes of the police interacting with residents on the sides of roads, each one shot in an askew fashion that appropriately reflects the emotions felt by the drivers.

“Hale County This Morning, This Evening” runs a brief 76 minutes. As a documentary, it’s informative, emotional and intriguing. As a record of African-American imagery, it’s not just an evaluation of “how we are seen,” it’s also a corrective that replaces stereotypes with visual poetry. 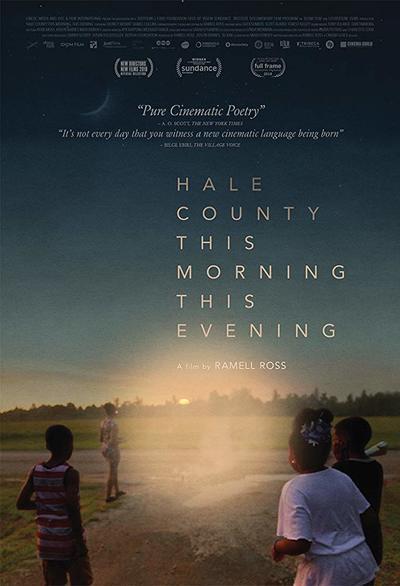 Hale County This Morning, This Evening (2018)