There is a place, in popular film, for a genre piece that plays exactly according to the established template for that genre as a means of highlighting skillful execution. "Gunday" is a fine example. Its gangland saga narrative isn't a particularly novel one, with its morally ambiguous cops and love triangles and so forth. As a '70s throwback it's definitely not alone in recent years. And yet "Gunday" is a thunderously entertaining movie, which is down to its cast and director.

Before getting properly underway, "Gunday" has a slightly protracted introduction—which, with apologies, features two of the worst kid performances of all time—in which we follow inseparable friends Bikram and Bala, torn from their families by the partition that created the nation of Bangladesh, and unceremoniously dumped in Calcutta with very few options. Once they hit on a means to support themselves, we jump ahead a decade or so and are introduced to Bikram and Bala as adults: Ranveer Singh and Arjun Kapoor. The movie itself makes a corresponding leap forward as well, powered by the intense presence and chemistry of its leads.

Ranveer Singh's career is off to a fantastic start. Not yet thirty, he's already showing the charisma necessary to pull off full-on masala hero roles in their most florid glory, and the acting chops to build the proper emotional foundation to support the heroic swagger. As a physical presence, he's almost overwhelming, as if the power of his stardom is not to be contained. This is, if hyperbole, only barely that. Ranveer Singh is awesome. The fact that Arjun Kapoor manages to not only not get blown off the screen but co-exist as an equal is a sign that he's going to be just fine in the stardom game himself. Singh and Kapoor are absolutely magnificent together.

"Gunday" also features two splendid supporting turns. Priyanka Chopra features as a kind of meta-Priyanka Chopra, a character who exists to start a love triangle, and to essentially be an item girl made flesh in the world of the movie. Ultimately she's what Robertson Davies called the "fifth business": not the heroine, not the villain, but a character without whom the story couldn't exist. (Further explanation impossible without spoilers, upon which the previous, with apologies, tap-dances.)

No discussion of "Gunday," though, would be complete without a tip of the hat to comment section favorite Irrfan Khan, billed here as the mononymic "Irrfan," which is funny for about ninety different reasons. As the eccentric genius cop on Bikram and Bala's tail, Irrfan gives a performance that is an absolute master class in "serious actor picking up a paycheck in a pop blockbuster." This is not a slight by any means. One needs to be a really good actor to pull that off while giving an actual performance, and to project the kind of enervated ennui that he does while still being invested. It's absolutely splendid work, all the more so for giving the impression that "Irrfan" is a performance art project where he takes on the persona of a "Bono" or a "Sting" except as the morally ambiguous cop in Yash Raj blockbusters.

Director Ali Abbas Zafar does a smashing job with his second feature. The only lulls are the necessary exposition at the beginning and the inevitable dip in urgency around the middle (which is nowhere near as bad as it is in some movies). The action's top-notch, the songs are good, and with the above-mentioned assets, "Gunday" is an unqualified success on its own terms: a solidly entertaining pop movie. The fact that Bollywood has been faltering a bit of late in cranking out this kind of picture really only highlights how much skill it takes to make one properly. In "Gunday," there is a lot of skill on display. And if one doesn't expect to see something it's not, "Gunday" should hit the spot. 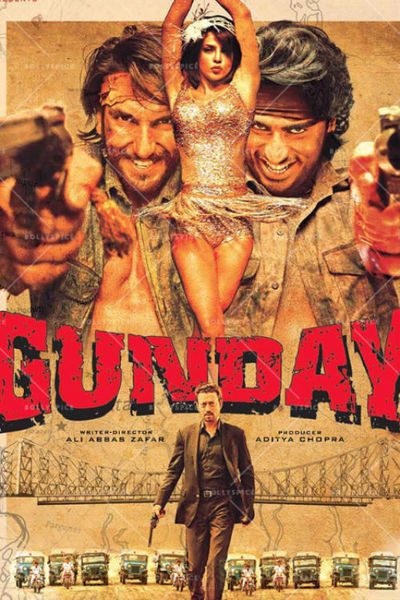