"Gulaab Gang" is a film advocating education for girls and autonomy for women, made by a first-time director who faced enormous obstacles in getting it made. That thumbnail version makes it almost impossible to root against the film, although some of Soumik Sen's obstacles were of his own creation. His claims that the film is fiction and that any resemblance to real people is coincidental strain credibility to the breaking point, as the pink saris worn by the title gang are the very ones worn by the real-life Gulabi Gang, whose name Sen didn't even bother to change, and upon whose founder Sen's protagonist is heavily based. This led to legal disputes that threatened to delay release of the movie. All of this is meant not to reignite the debates about poetic license in fictional films drawn from real life, but to make the point that "Gulaab Gang" is a movie whose director needs to get out of its way. Which is a wildly delicious bit of irony, considering that it's about women taking charge of their own lives, and that Sen is a man.

Ultimately "Gulaab Gang" is a compelling ninety minute underdog-vs.-the-system action picture that has the misfortune to unfold over the course of two hours and twenty minutes. Its lulls never entirely kill it, but it's only through the power of Madhuri Dixit's performance in the lead as Rajjo and Juhi Chawla's astonishingly villainous turn as the corrupt politician whom Rajjo must take down that "Gulaab Gang" maintains the momentum necessary to power through to the end. It starts promisingly, with a narrated intro concisely setting up Rajjo's motivations in starting the ashram where she educates girls for free and, when necessary, organizes them into a fighting force. The way Rajjo and gang deal with one oily local extortionist bureaucrat is immensely satisfying. But once the main story, involving the ambitious politician (Chawla) who seeks to co-opt the gang to burnish her own feminist and populist credentials, the pace begins to dip rather badly.

Despite the fact that Sen takes an unconscionably long time to tell the central story without sufficient subplots or songs (of which there are only a couple), there's plenty to like in "Gulaab Gang". Madhuri Dixit is one of the all-time greats and getting to see her work is a delight regardless of the surrounding film's quality, but getting to see her wreaking havoc in the kind of wild action sequences usually reserved for the thick-mustached, bare-chested, and male is a particular joy. "Gulaab Gang" could have stood the addition of at least a half-dozen additional sequences; in fact, a whole movie of Madhuri Dixit doing flying spin kicks and carving henchmen in half with scythes would be welcome. Although that would deprive the audience of the joys of seeing Juhi Chawla investing her villain with such melodramatic pathology. All Chawla is missing, in her role similarly usually reserved for men in popular film, is a mustache to twirl.

For choosing this material and these actors to play it, and for the terrific, organic camaraderie of the title gang, Soumik Sen is to be commended. He shoots interestingly, in the manner of a talented but raw newcomer. But he has a tendency to repeat himself, and there are long stretches of "Gulaab Gang" where nothing's happening at all, and there's no reason why the next thing that happens couldn't have happened before the preceding ten minutes of wheel-spinning. This can be written off to Sen being a rookie director with an as-yet unrefined style. But Sen's appropriation of a well-known, previously-filmed story, not changing much of anything essential, and presenting it as a fictionalization sits a little weird.

Ideally, filmmakers would be able to make films about genders not their own without there being any issues, and without reading the credits this isn't necessarily something that would occur to people watching the movie, but at this particular point in the development of both society and cinema it would be nice if a film like "Gulaab Gang" were made by a woman, as were the two previous films about the Gulabi Gang. 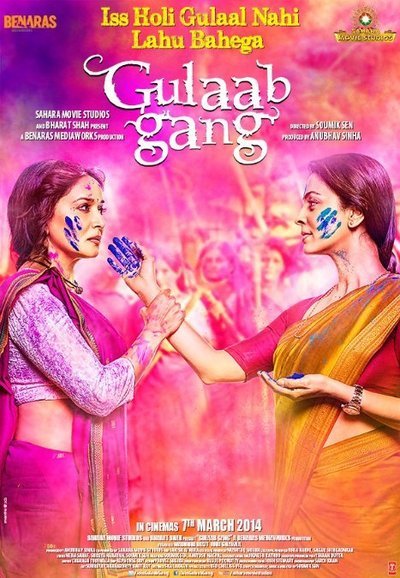