I was excited to be assigned this review for what some will consider obscure reasons. The script is by its own star and producer, Jeff Daniels, based on his play. The scenario is: a bitter, hard-drinking New York playwright reluctantly travels to Michigan to fulfill an obligation to work with a local theater company in that state’s hinterlands, in a town called Lima. And there he has to confront not just the young wannabe playwright who brought him out, but his own failures as an artist.

I know this doesn’t sound too terribly exciting, probably because (not to presume) you have never had a personal encounter with “Escanaba in da Moonlight.” That 2001 picture, Jeff Daniels' directorial debut, is one of the most peculiar movies I’ve ever seen. It’s so peculiar that I sometimes wonder if I hallucinated it, even though I own a DVD of it. Part of its idiosyncrasy stems from its exploration and appreciation of the idioms and practices of the people of Michigan’s Upper Peninsula. (Daniels, a Michigan native, has put much back into his home state, including a playhouse called Purple Rose.) But there’s much more to it. Some of which can be gleaned by reading Tom Bissell’s essay about its making, which you can do here. (Mr. Bissell is a friend and collaborator who turned me on to the movie in the first place.) I’m told that despite the essay’s respectful tone toward both Daniels and his project (Bissell is an Escanaba boy himself, after all), Daniels didn’t like the piece much. But no matter! It exists, and so does “Escanaba in da Moonlight,” and on reading about this movie a part of me hoped for, not a direct sequel—it would be too much to ask—but at least perhaps a spiritual one.

Alas, no. Directed by Timothy Busfield (yes, the actor, once of “Thirtysomething” and yes, “Revenge of the Nerds”) and adapted from Daniels’ own play, the movie opens with a montage of pre-Coronavirus New York at Christmas time, and the Great White Way, and the Playwright Restaurant, where I once drank with Jim Sheridan and rather more often drank alone. They have good chicken fingers and most of the rest of their menu is better than passable. It’s been a while. A text reads, “Based on an incident that became this play that became this film” and then there we are with Daniels, at the bar at Playwright (I think it’s Playwright—like I said it’s been a while) getting plastered, getting hit on by a younger man, going home alone.

The next morning, his character, a celebrated playwright named Joseph Harris, is at another bar, downtown this time, with his agent Helen. She tells him that he’s under a contractual obligation to get his butt out to Michigan to be Guest Artist at the Lima Playhouse. She also informs him that he’s a dinosaur, and should really look into working in TV or movies. “Movies are bupkis,” he says with disdain. “I’m a playwright, I’m a playwright.” Was even Edward Albee ever quite this pure?

Deathly afraid of planes, he goes on a booze-fortified train ride, getting off at a station the train almost never normally stops at, and being greeted only by surly and by-the-book ticket-booth attendant and station keeper.

Cut to the suburban home of Kenneth, played with some Josh Gad inflections by Thomas Macias, who wakes from a couch slumber. He’s overslept! In his car, he rehearses how he will introduce himself to Harris. “It’s because of you I decided to commit my life to the theater.” But how committed is he, really, when he punts on the one theater-commitment chore he had lined up for the day?

Once he gets there, and after some pissy back and forth, a viewer realization sets in: they’re going to be in this one place for the rest of the movie. This is what in the theatre they call a two-hander, albeit with trimmings to make it feel less like a two-hander.

And as for the Urban Dinosaur in a Distant American Outpost theme, it doesn’t figure all that pertinently. The not-particularly-detailed local color proves secondary, or even tertiary, to the short feature’s real concerns, which get, at first, a foot in the back door when Daniels’ playwright character asks Macia’s fledgling playwright character if he remembers 9/11.

What “Guest Artist” wants most is to make points about history, an artist’s relationship to it, and the perils of self-censorship. It’s, in a sense, real “The Newsroom” stuff, just within a different milieu. The whole Bitter Master Meets Eager Young Space Cadet Dramaturg scenario is just a pretext for Daniels and Busfield to get some points across.

Which is one of several reasons that—despite its minimal opening up—“Guest Artist” feels like a typical one-act, intelligent but not especially distinctive or compelling. 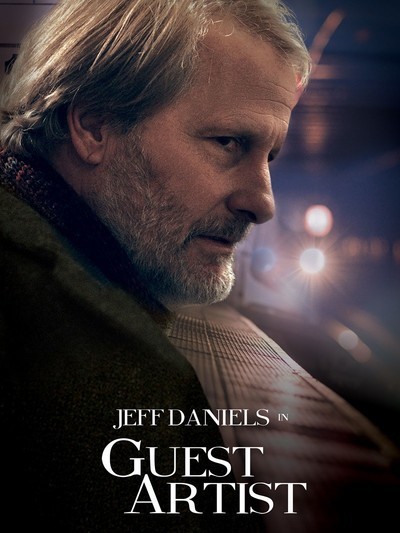