“There’s nothing inherently wrong with the long-form, multi-song music video, man.” That’s literally what I was thinking as “God Help The Girl,” the debut directorial debut from songwriter and musician Stuart Murdoch, stretched past its hour-and-a-half mark. The movie doesn’t quite make it to two hours, but my patience was tried pretty much any point at which the movie went a long stretch without a song.

For “God Help The Girl” is indeed a musical, and a good thing, too. The movie has no deficit of talent in the performing department either. The wide-eyed, beguiling Emily Browning plays Eve, a young, dreamy woman struggling with depression, who, upon release from a hospital after a suicide attempt, makes her way into Glasgow with a song in her heart and little else in the way of direction. She bops her way into the life of young musician James (Olly Alexander, so bookish and near-elfin that Michael Cera could probably break him over his knee); a flirtation leads to a roommate situation; a visit to one of James’ music students, Cass (Hannah Murray) leads to a three-way friendship; the friendship leads to a band. Eve’s self-defeating involvement with a snooty French rocker (Pierre Boulanger) leads to a recurrence of emotional trouble. And so it goes.

The story, such as it is, gets punctuation and emphasis via musical numbers, some of which seem to take place in the imaginations of the characters, some in the context of band practice or performance and so on. Said musical numbers are pretty tip-top. Murdoch, who also wrote the songs, is the brains behind the Scottish band Belle and Sebastian, whose canny mix of folk and continental pop stylings inspire the frequent use of the word “twee” among rock critics. I think that’s an unfair call: Belle and Sebastian’s mix of smooth sonics and sardonic wit strikes me as pretty genuine; “twee” implies a level of affectation that the character of the music just doesn’t support. In any event, Murdoch has said that “God Help The Girl,” which has its origins as a concept album of sorts, ended up a vehicle for a group of songs that he felt wouldn’t fit into Belle and Sebastian’s repertoire. I see his point, a bit, but by the same token, I have no problem in saying that if you like Belle and Sebastian’s tunes, you’ll like the almost two dozen songs in “God Help The Girl.” It’s also likely you’ll enjoy the way they’re visualized. Browning gets a lot of nifty retrochic costumes, and the strongest song scenes feel like the picture sleeves of French 45s from the ‘60s come to life. Also beguiling is the perspective on Glasgow; Murdoch shoots it as a largely sunny, sometimes bustling place that occasionally drifts into autumnal quiet.

So what’s the problem? The problem is that Murdoch’s script, and his direction of the non-musical bits, is lackluster to the point of somnambulant. Murdoch’s songs show him a writer of fair-to-excellent verbal wit, and his dialogue has more than a few zingers—“I’ve got the constitution of an abandoned rabbit,” good one—but he simply isn’t a dramatist. He can put together homages to “A Hard Day’s Night” and “Rock And Roll High School” in the space of one song, but he can’t string together really engaging character material when the music’s over. (And his actors try really hard to make up for the deficit.) I really don’t believe in the idea of Critics Telling Artists What To Do, but my idea concerning a long-form music video is not, I believe, an altogether bad one. That is, paradoxical as it might seem, “God Help The Girl” would have felt more like a real movie—and been more fun, and moving—had the story material been cut to the barest of bones, and that narrative, which is pretty slim to begin with, carried on the backs of the songs. Which, I can’t emphasize enough, really are special. Soundtrack album drops in the U.S. this week, and I can recommend THAT without hesitation. 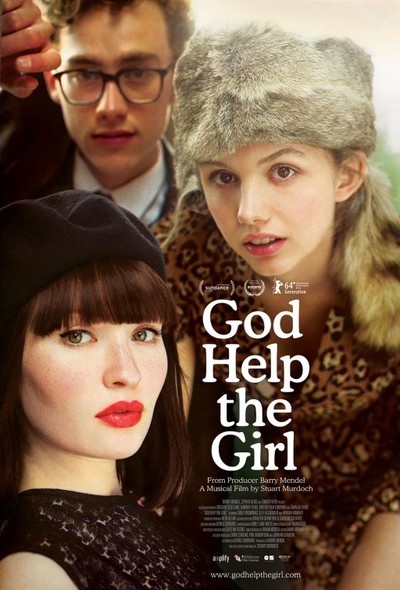