The Girl on the Third Floor

The impressive haunted house flick “Girl on the Third Floor” is just as much a machine to produce seductive imagery as it is an effective deconstruction of those blatant symbols. Set in an abandoned home and mostly following a solitary character—ex-lawyer and expectant father Don (Phillip Jack Brooks, A.K.A. former pro-wrestler C.M. Punk)—this blackly comic horror movie is equally concerned with the repressed pleasures and anxieties that are embedded in fetish objects: faded tattoos, silk lingerie, and congealed blood. Genre film producer turned writer/director Travis Stevens (with the help of story writers Paul Johnstone and Brad Parker) beguiles viewers with the half-stylish, half-disgusting fixtures of Don’s new house (it leaks in places and ways that bring David Cronenberg’s body horror films to mind) while he constructs a spare, but sturdy narrative about the power that men hold over women, even when they appear to be sharing. Stevens slowly and subtly unpacks that heady, provocative conceit with care and in a way that makes his directorial debut feel like the arrival of a major new talent.

Stevens makes you want to explore Don’s Freudian abode by playing up the sound of glass marbles lazily rolling across wood floors; a silhouette’s ambiguous shape behind a frosted window pane; and the steady, soft clanking of a dumb waiter’s metal chain as it rises up a narrow, asbestos-filled passage. There’s a dark spot on the wall that crumbles when you touch it, and you really can’t go far without spotting the milk-white fluid that spills out of and over odd places (yes, that is a used condom). Don’s new home is also decorated with floral wallpaper, bouquet-like moldings, and even a few Victorian-era drawings of clothing-free nymphs. It’s a fixer-upper that’s just as much defined by clean lines and empty space as it is by a gigantic hole in the ceiling and way too much gunk in the plumbing.

This collection of bewitching, genre-friendly amenities often stands in for Don’s repressed emotions. Which makes sense given how focused Don is on improving his new home, stubbornly preparing and patching it up all on his own, and with only a small tool kit (an ex-colleague and family friend compares it to a Swiss-Army knife), while his concerned wife Liz (Trieste Kelly Dunn) offers support from afar through video-calls. Don’s new home also has a past, as we are told by inviting supporting characters like local bartender Geary (Marshall Bean) and pastor Ellie (Karen Wooditsch). But Don knows what he’s getting into, as he tells them…he just thinks he knows how to handle himself better than he actually does. “Girl on the Third Floor” can be read as Don’s passion play, complete with a tempting and mysterious neighbor (Sarah Brooks) and a rightfully on-guard German Shepherd (Cooper, Don’s companion) who won’t stop barking whenever something bumps around in the night. Which it naturally and regularly does.

Still, while there’s nothing startling about how Don behaves—some of his actions are typical of the sort of macho, won’t-pull-over-and-ask-for-directions fuddy-duddy alpha male—his story is still pretty involving given how it’s eventually revealed to be about what Don’s thinking of when he’s not thinking about fixing his house. There’s some sex in the movie, but it’s mostly implied (there’s even a scene where Cooper is left outside of his owner’s bedroom while Don gets down to business). Stevens is less coy about gore and explicit violence: he gives us a good look at the crater in one supporting character’s forehead after a lethal sledgehammer attack. But even these violent outbursts are handled with enough care to make the periodic eruption of bodily fluids seem not only morbidly funny, but also weirdly essential. Here’s that tortured masculinity you never asked for; pretty gross, huh?

Stevens’s story might seem a little preachy, since it’s explicitly about how Don’s actions have consequences (Liz: "I just don't want you to bite off more than you can chew.”) But Stevens often seems to be just as interested in uprooting Don’s ego as he does in picking at his physical insecurities. He emphasizes Brooks’s physicality (especially his tattoos and lean upper-body) and gives his leading man enough room to indulge in a little Bruce Campbell-esque hamminess without going too far over the top. Stevens also surrounds Don with secondary characters who reflect his concerns and allow him speak without talking much.

Don stands out, even in a genre full of Dons, because he’s revealed to be the object, rather than the subject of “Girl on the Third Floor.” That narrative change-up might make Stevens’s otherwise smooth narrative a little bumpier, but it also makes sense, and adds an appropriate amount of retrospective weight to this un-pretentious, clean-burning B-movie. There’s a world outside of Don’s head, and it’s filled with people who matter just as much as he does. I can’t wait to see where Stevens goes next as a director. 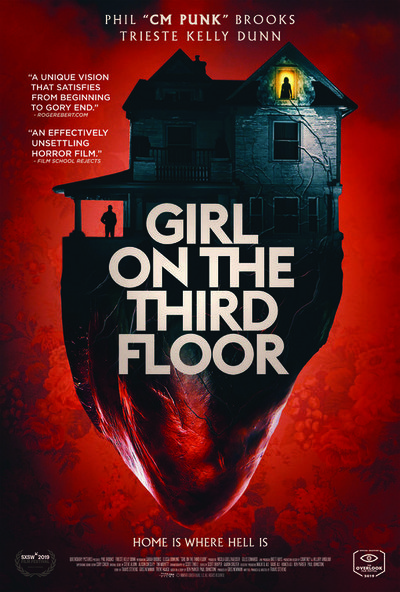 Tonya Kay as The Nymph