Kristen Wiig should, in theory, be able to elevate any film or show she's in simply by showing up and being her smart, clever, fearless self. With a well-timed deadpan aside or an amusingly awkward physical bit, she makes decent material better and good material great.

This is a notion that "Girl Most Likely" pushes to the absolute limits. Wiig finds herself sadly outmatched in this comedy crammed with wacky and tacky characters—types, all of them—in which she's stuck functioning as the uptight, frustrated straight woman in the middle. She rarely gets a chance to shine because her role is so underwritten.

Husband-and-wife directors Shari Springer Berman and Robert Pulcini have had success in the past with inspired subject matter, such as the excellent "American Splendor" from 2003. Here, they're working from a script by Michelle Morgan that's chock-full of contrived situations and very few moments that actually ring true.

It contains a menagerie of quirky weirdos: people we're clearly meant to laugh at for being ridiculous, delusional, pathetic or all of the above, up until the precise moment that we're supposed to join the film in doing a 180-degree turn and embracing them for being exactly who they are. This is the formulaic, inevitable journey Wiig's character, Imogene, must travel.

At the film's start, she's a well-to-do Manhattan magazine writer attending a society event with her obviously evasive longtime boyfriend. It's clear she doesn't quite fit in with these old-moneyed women, though—she doesn't have the right pedigree or wear the right dress or say just the right, vapid thing in conversation.

With head-spinning swiftness, Imogene loses her boyfriend, job and apartment and fakes a suicide attempt, all of which plays out in broad, sitcommy fashion. And so this once-promising playwright must return to her hometown, a place she's been running from her whole adult life: the cheesy slab of boardwalk known as Ocean City, N.J. (In case we didn't know we were in New Jersey, "Girl Most Likely" features really obvious song choices on the soundtrack from both Bon Jovi AND Bruce Springsteen.)

There, she is forced to coexist in a cramped, cluttered beach house with her blowsy, hard-gambling mother, Zelda (Annette Bening in a husky accent) and Zelda's younger boyfriend, an alleged CIA agent who goes by the name George Bousche (say it out loud). He's played by Matt Dillon. There's also Imogene's younger brother, Ralph (Christopher Fitzgerald), who's obsessed with crabs and appears to be mentally challenged in some unspecified way; and Lee ("Glee" star Darren Criss), the twenty-something who's renting out Imogene's childhood bedroom.

Bob Balaban gets even less to work with as Imogene and Ralph's father, whom they haven't seen in decades because their mother told them he was dead.  This development is also supposed to be funny, and poignant, but never succeeds either way. It's not enough to assemble an esteemed cast—you have to give them something worthwhile to, you know, do.

Criss, in his first major role in a feature film, is the only person to emerge completely unscathed. While his character may seem impossibly sweet and charming, Criss has a natural likability and some nice chemistry with Wiig—more so than anybody else in the cast, certainly. ("Glee" fans will be happy to know that the leader of the Warblers does indeed get to belt out a suddenly ubiquitous, '90s boy-band tune.)

But the desperate straining for laughs isn't nearly so off-putting as the abrupt tonal shift "Girl Most Likely" makes as it trudges toward its conclusion. The film encourages us to enjoy feeling superior and smug to Imogene's relatives and their schlocky surroundings, just as she does, then goes all soft and gooey and wants us to love them. This is particularly difficult to do because they're not so much recognizable people as a collection of flimsy eccentricities, shriveling up in the sunshine of the Jersey shore. 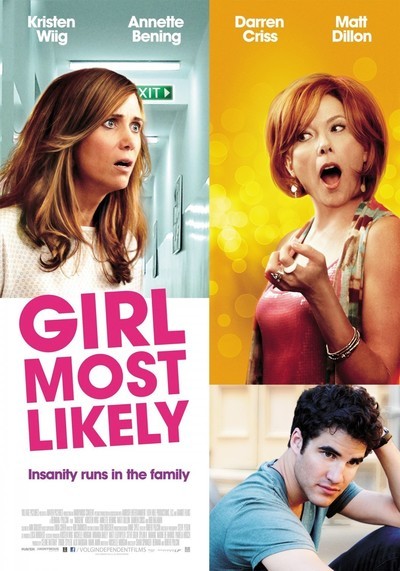