“Ghosts of War” is a B-movie that's not afraid to go there—starting with WWII soldiers and their PTSD, leading them into a haunted Chateau, and ending on its most bonkers and heartfelt idea of all. It almost feels like writer/director Eric Bress (of "The Butterfly Effect") built a story backwards starting from this twist, because even if certain supernatural elements can hold it back, they're not what you'll be thinking about after the film is over.

One of Bress’ greatest strokes comes with casting—he’s collected five faces you might recognize from younger, more innocent roles, and who are compelling to see here as men who have matured rapidly due to the wartime experiences eating away at them. It’s strong enough that you don’t mind some archetypes, like how Skylar Astin's Eugene is the brains of the operation, as indicated by his glasses, and by how references he makes to philosophical concepts are then experienced right after he mentions them. Then there’s Brenton Thwaites as Chris, the main soldier we follow through this nightmare, whose biggest problem might be that he doesn't have a whole lot of background. All of them are good, especially Kyle Gallner’s sniper Tappert, whose drawl and weary gaze hints at a full character, all during a long monologue about a gruesome memory.

War has certainly been hell for them, and it's made these afflicted men in 1944 a bit ruthless. In an opening scene, they even let a cornered Nazi put up his dukes for some boxing before abruptly shooting him in the head, making for a beat that's more sad than triumphant. That cruelty lingers when they arrive at a large Chateau in France they've been assigned to hold, which was previously owned by the Nazis. And if the symbols in the attic are any indication, paired with scratches on the floor, and some occasional ghosts, the Nazis did some evil stuff there when it was under their control.

Although this is a haunted house movie of sorts, as experienced by American soldiers who bond over their PTSD, "Ghosts of War" is not scary in the slightest with its typical ghostly imagery (white faces, tilted heads, ear-piercing screeches). And when it focuses on the guys trying to figure out the mystery of what forces are haunting the manor, all during some weak jump scares, it nearly writes itself into a corner.

But the action certainly perks the movie up, especially when our five soldiers scramble to fend off around 50 Nazis. Along with the unsettling dark corners effectively engineered by cinematographer Lorenzo Senatore, the excitement of "Ghosts of War" is less from a ghost popping up, but in seeing these guys cautiously move around this space as it seems to close in on them. From the very beginning, Bress’ film has a strong dynamic of five soldiers that you want to see finish the mission alive, and as "Ghosts of War" starts to twist itself and go to weird places, you stick with them and the story.

Bress has a bleeding-heart explanation for all of the on-the-nose dialogue, and the cheesy ghosts, and it comes at a third act revelation that is messy like other parts of "Ghosts of War," but effective. Using an idea that Bress clearly cares about more than anything else here, it’s admirable in how it deepens the themes and expands the scope of the story, while grappling with the cruelty of all that has happened. I'm being cautious to spoil it, because it's the script's full ride that truly helps this endpoint resonate. The twist will definitely impact some more than others, but I suspect it’s the emotional sincerity "Ghosts of War" proves to have from the start that’ll be its true hook.

Now playing in virtual cinemas and available on digital platforms. 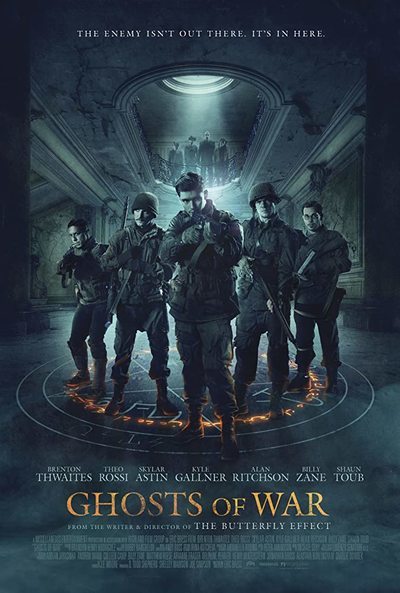