"George & Tammy" is about two lovers who probably shouldn't have been together, never mind over many years. But their union led to numerous hits—duets and solo songs—about the historical relationship between George Jones and Tammy Wynette. He was the hard-drinkin' king, and she was his supportive queen, with an empire built of all the stuff that makes for a good country ballad but not good love.

As this gutting and compelling series depicts it, George Jones and Tammy Wynette collided in the late '60s while he was headed for a self-destructive downturn, and she was on the rise. This real-life "A Star is Born" is covered here with a musical's plotting, in which full-length musical performances chart each development in the relationship and six-year marriage. The whole of it is enlivened by incredible work from Jessica Chastain and Michael Shannon, who exchange show-stopping singing moments and come packaged with a strong sense of passion, along with a knowing, exciting taste for sincere kitsch.

This country music saga spans many years, wrangled by director John Hillcoat and showrunner/writer Abe Sylvia into the story of two careers initially intertwined as a business deal. First, it was Tammy Wynette (Chastain) dueting with the revered George Jones (Shannon). But she also cut his hair, creating moments of care that had him even more compelled by the gentle force that is Wynette. For Tammy, this was only the beginning of a career that would require immense resilience and a constant fire within, illustrated here strikingly by Chastain's rich performance.

"George & Tammy" is a musician story that cherishes the songwriting process, though the plot's contrast to country music is always striking. Their lives run a million times faster than the ballads they sing, and for a form of music that thrives on coming on home to a tidy resolving chord, their pairing is a constant dissonance that only briefly has harmony. Sometimes that's a tender time rolling around in bed, or when one of them makes a big sacrifice (like when George leaves his record company early on for her). There's talk early in the series about how one needs to live a song in order to sing it, but George and Tammy experience the real stuff that's in between the verses.

It can be fitfully exhausting to watch this chaos in close-up, but "George & Tammy" gives a lot of reasons to stay tuned. It's a colorful tragedy; the series nails its period details with so many dated hairpieces, country-royalty outfits (including a pink cape for Tammy), and sports cars for George. But to hammer home how this all feels, "George & Tammy" covers everything with a rich haziness—cinematographer Igor Martinovic's visuals love to make much of the frame fuzzy, sometimes with a person blocking much of the view, for only a top corner to reveal a face or figure. It creates a fitful dreaminess and isolation, and the show's constant attention to profile views of its actors makes them larger than life but in such an intimate way. It's all a vital part of how this show about repeated romantic patterns doesn't become redundant despite its emotional dizziness.

Both Chastain and Shannon are incredibly sensitive on-screen forces, however much they have two very different ways of filling a room. They have deep chemistry throughout, whether it's the initial courtship in which George presents himself as a sweeter, more loving man than her current husband (Pat Healy's Don Chapel) or when they're much older, worn down by their story but still sharing some glint in their eyes. And they establish the infatuation that kept them coming back—she was a huge George Jones fan long before meeting him, and he was quickly captivated by not just her voice. When the two are on the stage together, you get why this all happened this way.

Chastain and Shannon have depicted a relationship before, in Jeff Nichols' "Take Shelter," and established themselves with other stories of marriage. But now they have soaring songs to complement their dramatic work, as when we see Chastain belt out the highest notes of Wynette's hit, "Stand By Your Man," even though George's behavior has professionally screwed her over again. And the scene when Shannon's much older Jones records future mega-hit "He Stopped Loving Her Today," with a weary Tammy watching him just beyond the glass of the recording booth, is heartbreaking and gorgeous.

Outside of their careers, the series gives a somber light on the forces in their lives that, in one way or another, gave George & Tammy comfort but controlled them. After giving birth to their child Georgette, Tammy suffers complications from a hysterectomy that has her reliant on painkillers and injections later provided by songwriter, manager, and later-husband George Richey (Steve Zahn in a good Nice Guy turn), which soon becomes another toxic relationship. But George Richey is not an anomaly in this world, and "George & Tammy" illustrates the fraught placement of women in this universe that features multiple men who write ballads with Tammy as a way to control her. The people she's closest to want a piece of her, and her status of being a top-selling singer only puts her more in danger.

Meanwhile, George carries on a violent alcoholism from his abusive father, which sometimes stirs a freak tornado that loved ones like Tammy, or his friend Peanutt (Walton Goggins), are caught in the middle of. With many more inches on him than the real Jones, Shannon fashions the singer as a monster who's as destructive as he is sensitive, and whose dangerous temper only softened when he had a guitar in hand. Shannon is the kind of actor who looks into the darkness and finds a reflection, and this is some of his most revealing, brilliant work yet. Jones' "If the Drinkin' Don't Kill Me, Her Memory Will" doesn't make the cut, but Shannon fills his performance with that kind of pain.

In telling this story, Sylvia's writing can be too cutesy with its exposition, like how George's introduction includes watching him flush money down a toilet. But the series only hits a major snag when it factors in Georgette Jones as a kind of recurring cameo. It's her book that this series is based on—and she gets the first epilogue title card—but "George & Tammy" can't find a way to factor her naturally into this picture without bringing more exposition or general hollow emotions. Her presence only highlights how the series can clumsily handle its biopic details, like the children from all their relationships, or the career moves that made them big over and over again.

"George & Tammy" accomplishes a rare feat for a relationship story that comes with so many pristine ballads—it makes you see the complicated depths of what is so unhealthy. They had on the outside what country fans wanted, and it took an incredible toll on them. You appreciate both of them for their talents and how their bond is a type of cursed partnership that only sometimes looks like love. A country song can't do that with just three or four verses and a chorus; a heartfelt chronicling like "George & Tammy" can. 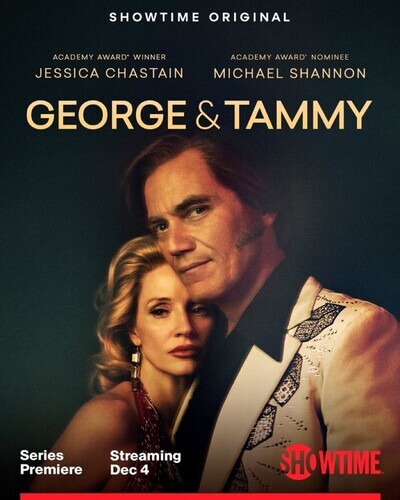